Oppo Find X: Everything you need to know

Smartphone buyers want full-screen phones but they don’t like notches, and so the Oppo Find X takes a different route. Its slide-out camera array delivers both practicality and drama to the new Android handset, unveiled officially today in Paris, France.

It’s all about the slide

At first glance, you’d be forgiven for thinking that the Oppo Find X did without cameras altogether. While that may be a simple way of avoiding a notched display – not to mention making your bill of materials cheaper, and keeping privacy zealots happy – that’s not actually the case. Instead, the top section of the phone slides up.

Unlike, say, a Sidekick’s flip-twist mechanism, though, or the slide of the venerable Nokia N95, Oppo opted to make the Find X’s pop-out camera array motorized. Open the camera app and it emerges from the top of the phone in about half a second; switch away, and it slides into the body of the Find X. The upshot is that Oppo can dedicate even more of the front of its phone to display, without having to accommodate a notch or large bezels.

In fact, you’re getting a full 6.42-inch panel running at 2,340 x 1,080 resolution. It’s an AMOLED screen, with curved edges left and right just as with the Galaxy S9 Plus. Oppo claims that it has dedicated 93.8-percent of the fascia to the display.

The cameras promise something special, too

All that drama would be for naught if the Find X was packing sub-par cameras; happily, on paper at least, that’s not the case. On the front, there’s a 25-megapixel camera for selfies, which Oppo says has been combined with a 3D camera array that can better figure out lighting to more accurately illuminate your face. 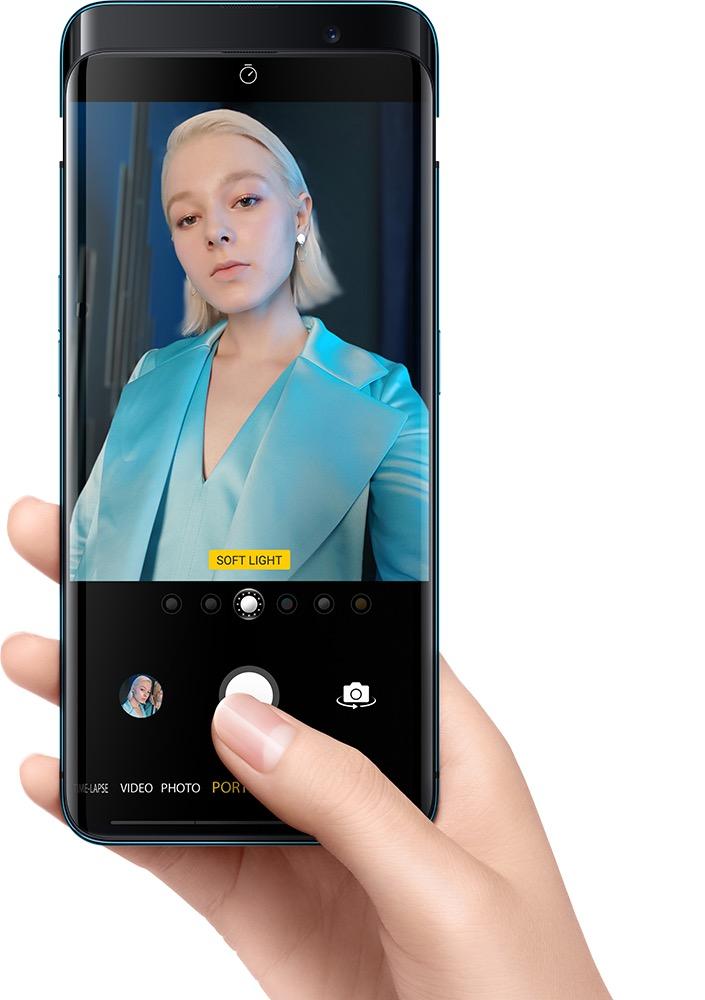 The back, meanwhile, gets dual cameras: one 16-megapixel f/2.0 sensor, the other a 20-megapixel f/2.2 sensor. That gives you all the portrait mode photography we’ve come to expect from our smartphones, and Oppo is promising AI-powered scene recognition – just like everyone else in the industry right now – to automatically adjust the settings according to the conditions, with support for 800 different scene types.

Oppo hasn’t stinted on the style

Some might associate Chinese phones with devices more at the affordable end of the scale, but the Find X is Oppo’s opportunity to demonstrate it can make a premium-feeling device too. It’s effectively two slices of glass with metal sandwiched in-between, finished in one of two colors. Oppo is calling them “Bordeaux Red” and “Glacier Blue,” and saying they shimmer like a “precious gemstone.”

Because of the way the color runs through the body of the phones, the finish is slightly different depending on the angle at which you look at them. Your eye shouldn’t be distracted, either, but gaps or holes. There are no visible openings around the display, Oppo says, while the body-color buttons are slimline metal slivers. 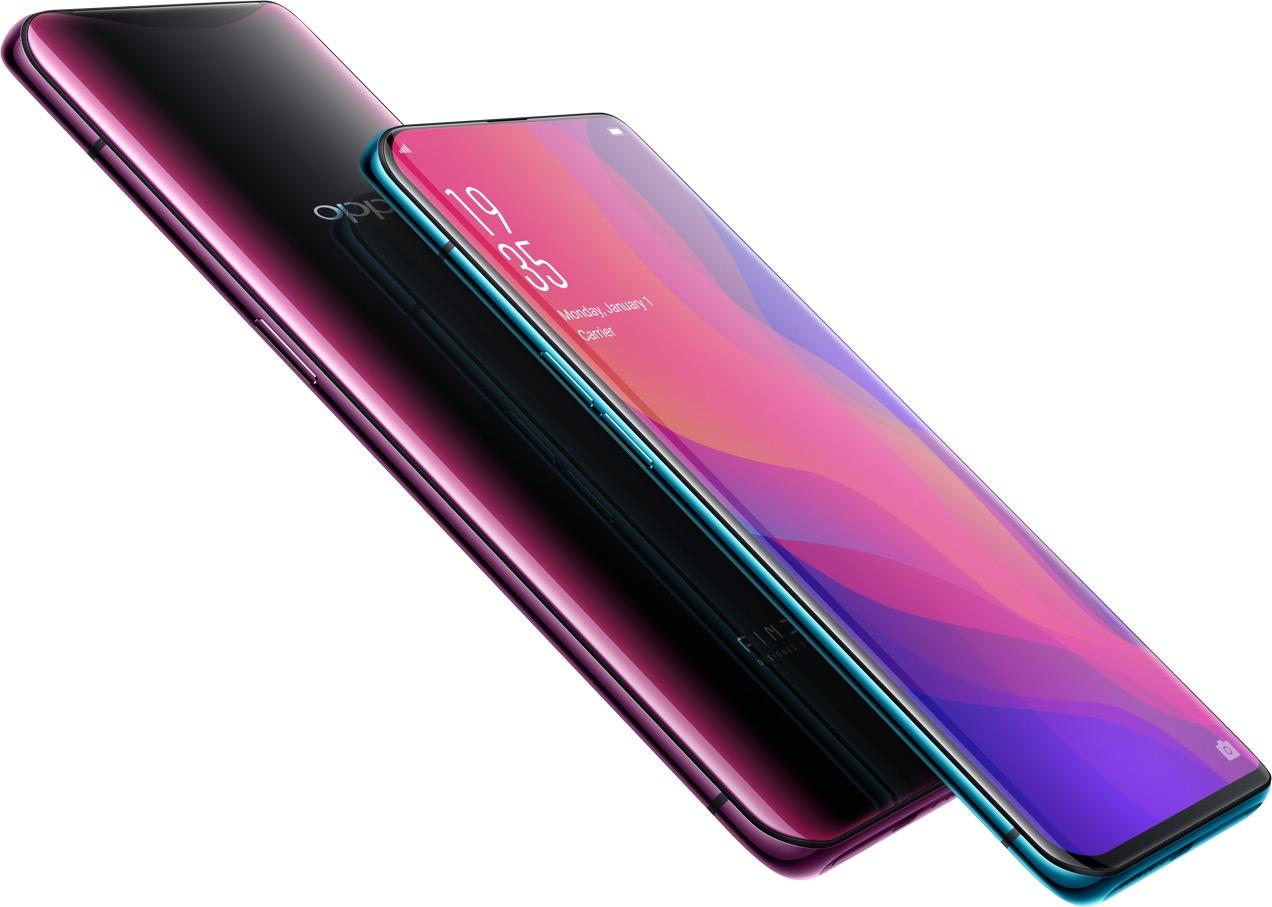 If we had one concern after being initially wowed with Oppo’s sliding mechanism, it was durability. After all, moving parts give a device just one more place to break down over time, especially when you’re talking about a phone that could very easily be dropped. Even if you’re careful with how you handle it, there’s a good chance that the Find X’s sliding camera array could be a place where dust and grit want to congregate in your pocket.

Oppo is looking to cut those potential complaints off before they even have a chance to worry us, however. The company says it has tested the sliding mechanism more than 300,000 times without it failing, for example. There’s also better protection for the cameras themselves what with having them covered by the body of the phone when not in use, the company argues. That, though, does have to be balanced against the fact that it’s probably going to be tricky to find a case that fits the Find X but also allows the cameras to pop up when required.

Inside it’s a flagship

The Find X may be unusual on the outside, but inside it’s what we’ve come to expect from a 2018 flagship Android smartphone. Qualcomm’s Snapdragon 845 takes center stage, with the chipset paired with 8 GB of RAM and a healthy 256 GB of storage. If the Find X stumbles when it runs Android 8.1 Oreo, we can’t blame the hardware.

There’s also a 3,730 mAh battery, complete with fast charging. Sadly Oppo hasn’t found space for wireless charging, nor waterproofing, and if you’re looking for a headphone jack you’ll be disappointed. Instead, you can expect to use USB-C for both power and audio.

Show us your O-Face

The iPhone X has Face ID, and Oppo has O-Face Recognition. The company says that the Find X can project 15,000 infrared dots onto the user’s face, something it’s referring to as “3D Structured Light Technology.” That’s then analyzed to identify the user’s unique facial features.

Oppo claims it’s 20 times safer than fingerprint recognition, in the hope of distracting you from the fact that you don’t get a fingerprint sensor at all. The same technology, meanwhile, is used in the selfie camera. Oppo uses the 3D Structured Light Technology to map out the nose, eyes, and other facial features, and “personalize your selfie” as a result. Hopefully it’ll err on the side of realism rather than some of the more aggressive “beauty modes” we’ve seen on other recent smartphones.

Let’s say the Oppo has been “iPhone inspired”…

Atop Android 8.1 Oreo, Oppo has loaded the latest version of its custom interface, ColorOS 5.1. It’s been revamped, the company says, to suit the “Panoramic Arc Screen” but we’d forgive you if you mistook it for iOS. Oppo’s iconography and UI is astonishingly similar to what you’d get on an iPhone X in many places.

The comparisons get even more obvious when it comes to 3D Omoji. Yes, the Find X has its own version of Apple’s Animoji, with cute duck, penguin, hippo, and other characters that you can animate using the front-facing camera array.

There’s a Lamborghini partnership today, too

Huawei has its Porsche Design tie-in, so what could Oppo do but look to another supercar manufacturer to deliver a special edition. The result is the Oppo Find X Automobili Lamborghini phone, a fancier version of the Android handset. It’s considerably more expensive – a full 1,699 euro, in fact, or around $2,000 – but you do get some appealing extras.

On the outside, there’s a carbon fiber effect finish, along with the Lamborghini raging bull logo. However, the speed in this case isn’t about the processor, but the charging. Oppo has used a whopping 10V, 50W SuperVOOC power adapter, which it claims can get the Find X Lamborghini Edition from zero to fully charged in a mere 35 minutes. If you’re in the habit of forgetting to plug your phone in to charge overnight, that could be a big lure.

This is Oppo’s big play for North America and Europe

Oppo has, until now, been content to leave North America and Europe to its OnePlus sibling, but that all changes with the Find X. In Europe, it’ll go on sale in August, priced at 999 euros. US pricing and availability haven’t been confirmed yet, nor whether Oppo has managed to secure any of those all-important carrier partnerships, but we’ll presumably know more in the coming months.