This week I unboxed the OnePlus 8T Cyberpunk 2077 edition, and I was shocked. The phone, the bits I’d seen in the preview several weeks ago, those weren’t shocking. They did not disappoint! But it was the detail in every element I wasn’t able to see in the preview that surprised me. I was surprised to see such quality and extreme attention to detail in every aspect of the design of this device, from the outermost packaging to the materials used throughout.

The last several seasons of OnePlus phone releases have placed special emphasis on the quality of the packaging. Take for example the OnePlus 7T, representative of a new age in OnePlus graphic design. Emphasis on the packaging of the phone shows the buyer that OnePlus values not only the experience the user has with the phone, but with the brand. The OnePlus 8T Cyberpunk 2077 Edition delivers the epitome of smartphone packaging extravagance and attention to detail.

The in-store packaging for this most special of editions of the OnePlus 8T for Cyberpunk 2077 is pinhole hook (inverted T shape punch hole) ready. It’s like a blister bubble package you’d see for a vintage Star Wars action figure, only better. This sort of packaging with a product like this evokes a clash of messages, a dissonance of senses in the buyer: ease of access and potential for great value. 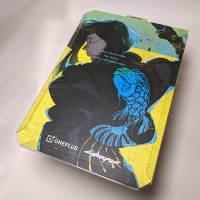 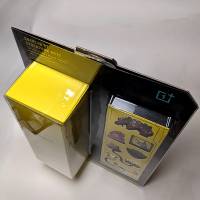 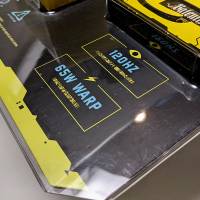 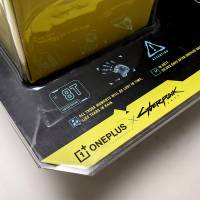 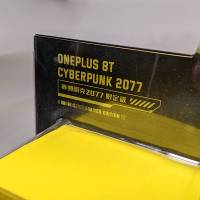 Items packaged for the pin are traditionally made in large numbers, made to hang on a peg for a moment, placed in a shopping cart the next. In the last decade, big-name fashion brands and radical product creators have adopted this package aesthetic to capitalize on that nostalgic collectable toy feeling – even and especially for products that are NOT cheap. 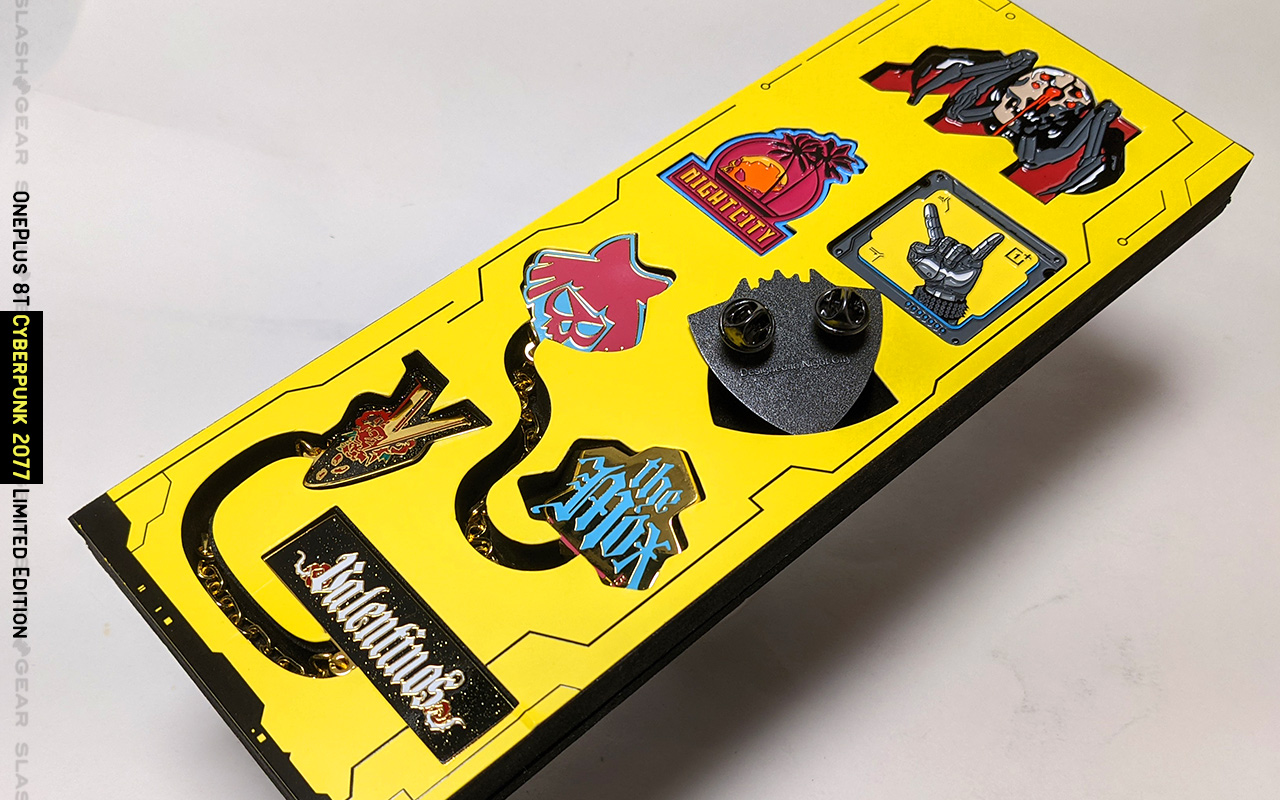 Alongside this most special of editions you’ll find a set of metal pins. These unique designs replicate imagery found in the game Cyberpunk 2077. You’ll find one of these pins in the phone box too. 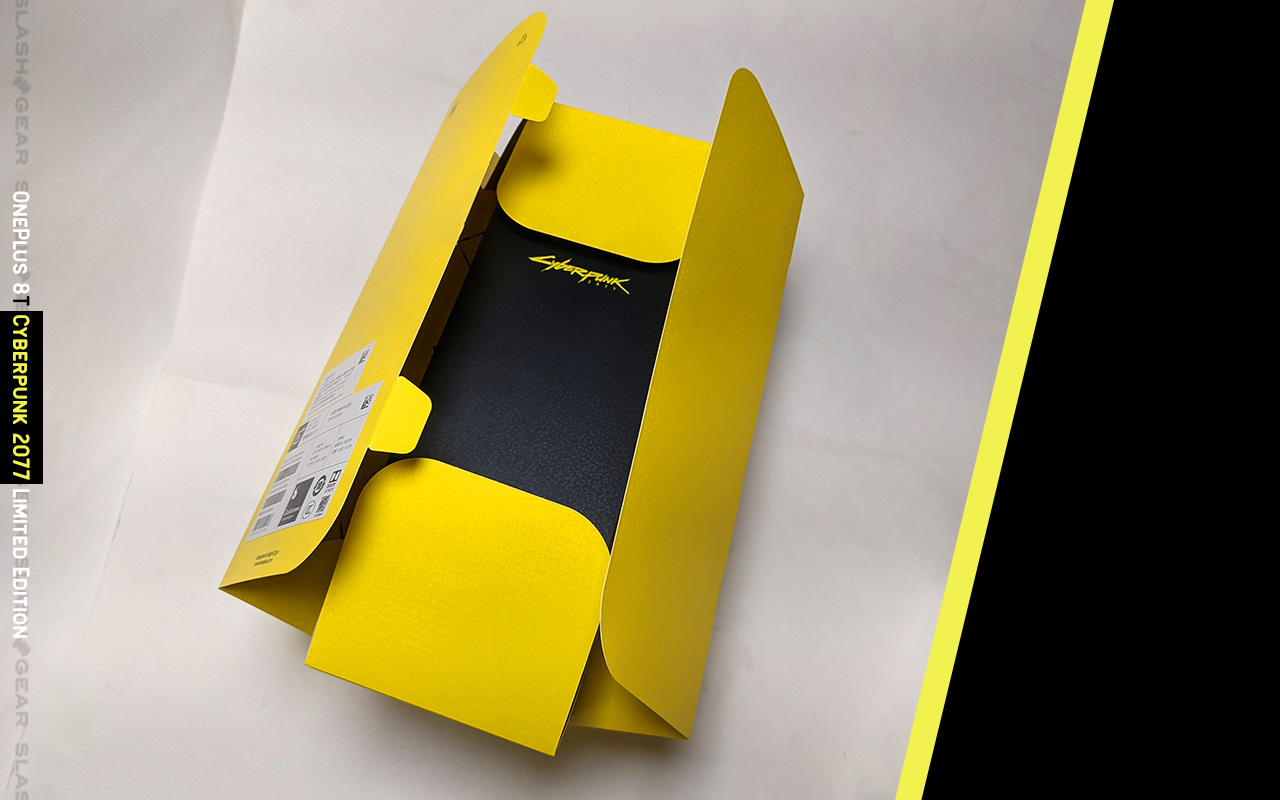 The inclusion of the same pin in the extended pack and the basic phone box indicate that there’s more than one potential form for this device – one with the extra pin set, one with just the phone box and the single pin. 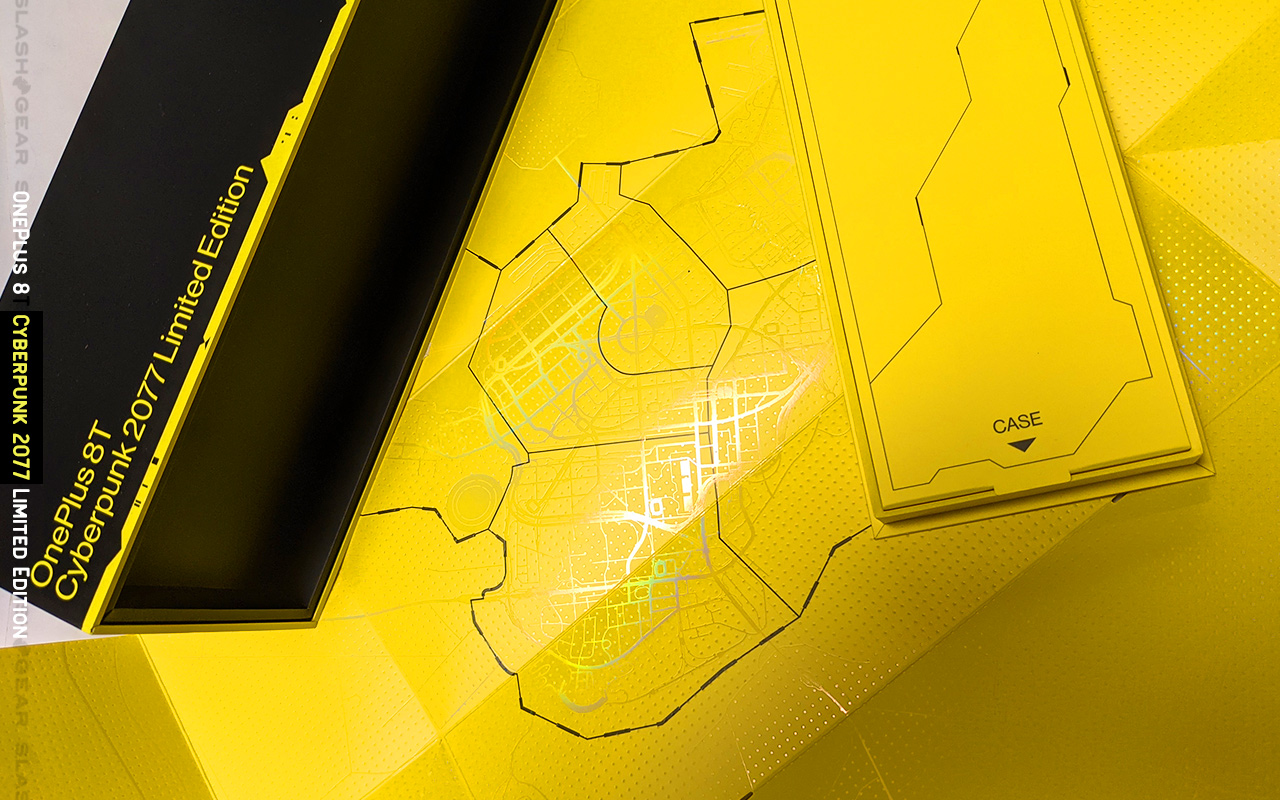 Above you’ll see the box in which the phone is found. There’s a pack at the back of this box that contains a special Cyberpunk 2077 protective case and a bonus pin. 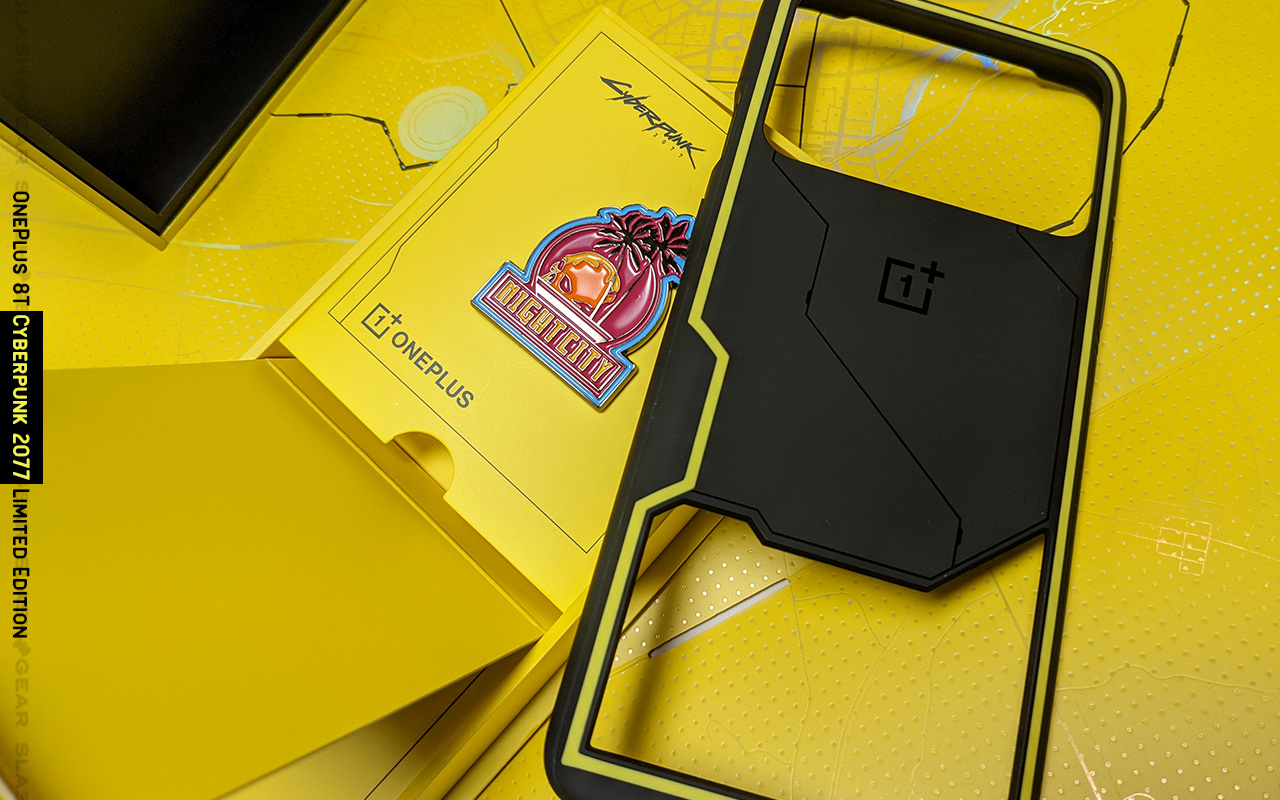 The detailing in the yellow board packaging surrounding the box is particularly beautiful. This piece is thick – thick enough to include an indented design, a standard print layer, and a holographic foil layer of print. 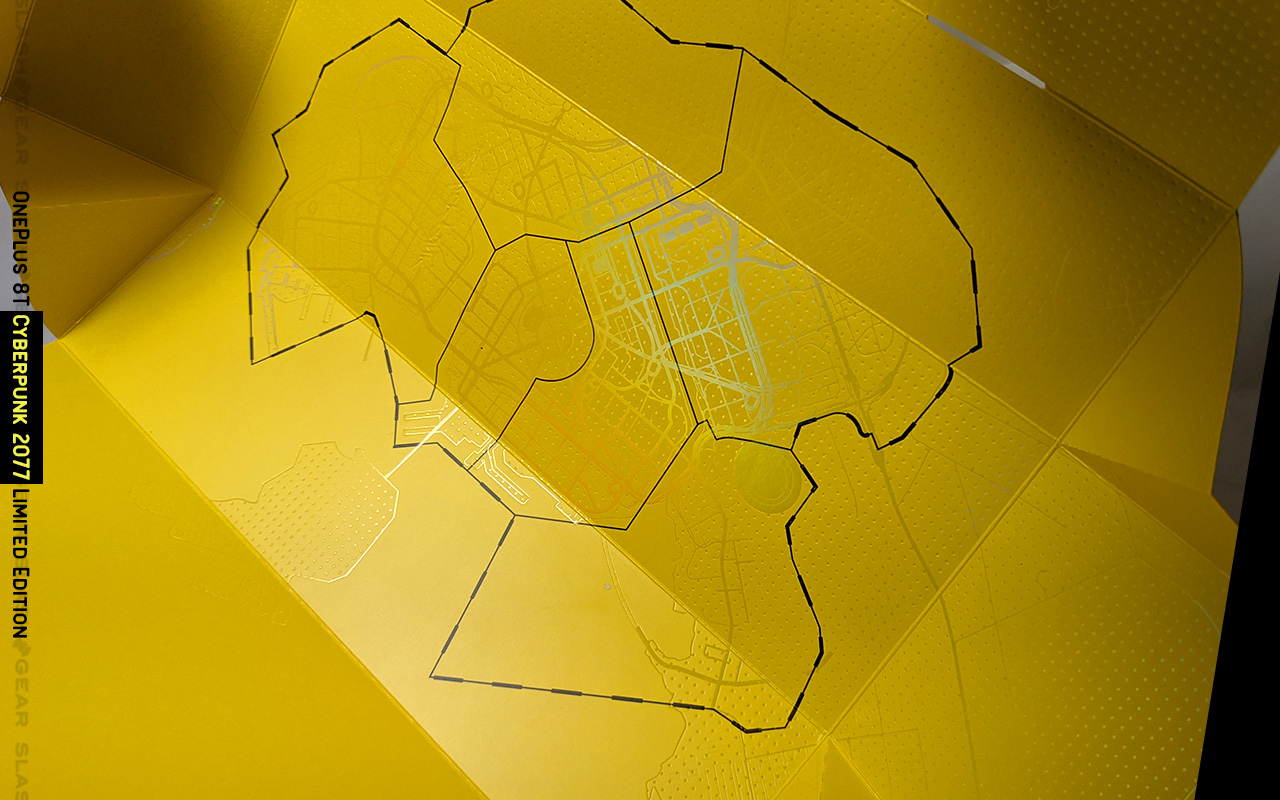 It’s a credit to the designers of this extravagant packaging that I’d find it shocking if any buyer ever tossed any part of said packaging in the garbage. Basically every bit of this design deserves to be put on display.

In the paper materials included in the phone box is a familiar sort of ephemera. This multi-layer element is a part of the unboxing experience we’ve seen included with OnePlus phones before. 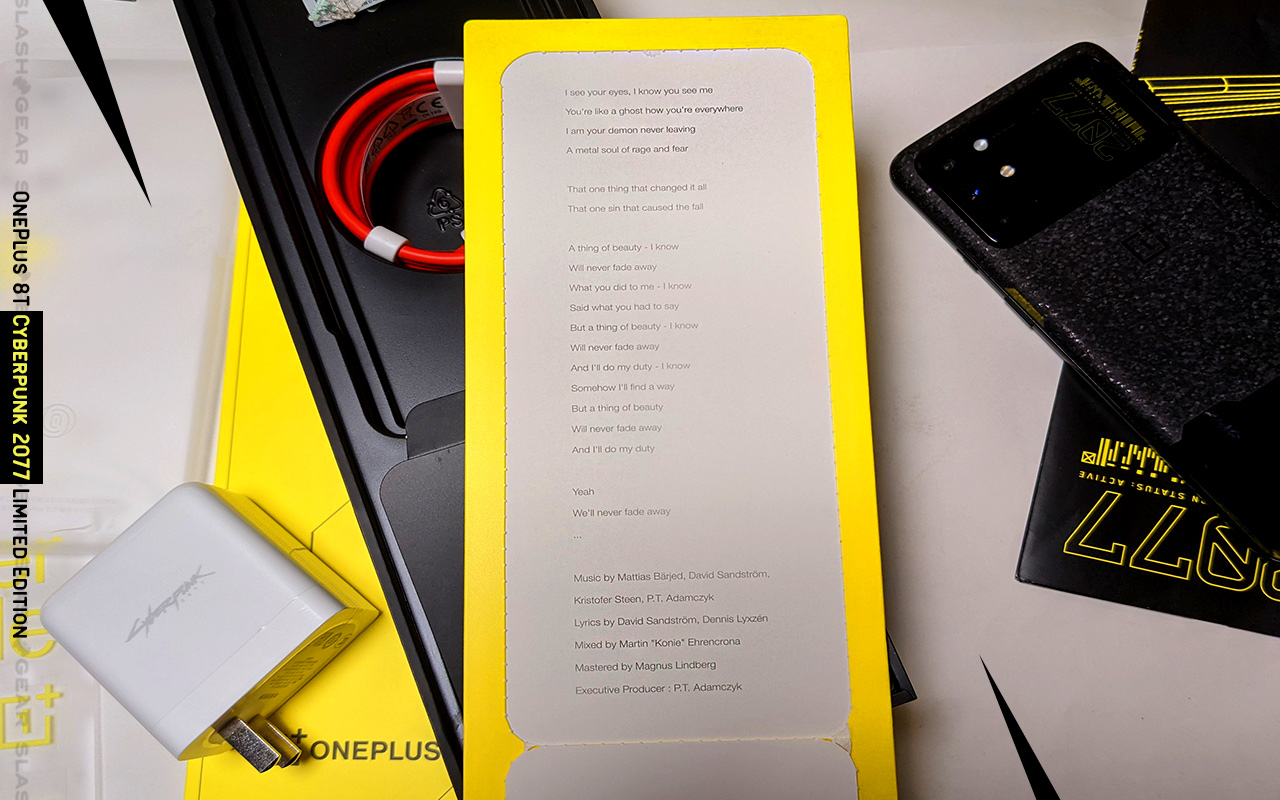 This crack-open heavy paper element usually includes a message of appreciation for the new OnePlus phone owner on behalf of the creators of the device. Here it contains lyrics from a song used in the game Cyberpunk 2077.

Below you’ll see a fold-out poster included in the phone box, too. Despite this being yet another different material than the several we’ve seen in this package so far, the yellow tone remains the same. 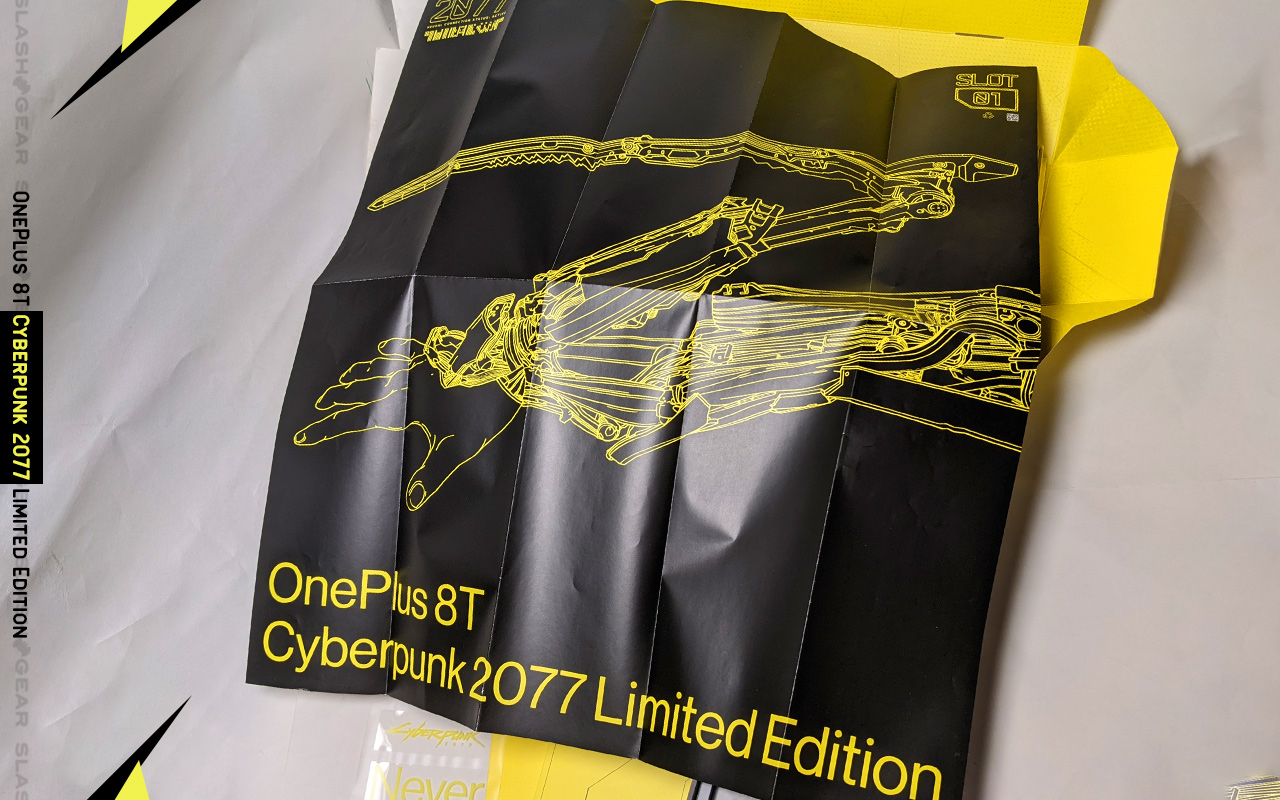 Color accuracy in a product like this is exceedingly important. This packaging and product contains several rather disparate materials – plastic, papers, metal – all of which include a precise application of this exact tone of yellow.

OnePlus saw to it that even the charging block included with this phone was made unique. This might well be the only Cyberpunk 2077 USB charging block in the world – it’s unlikely there’ll be another. 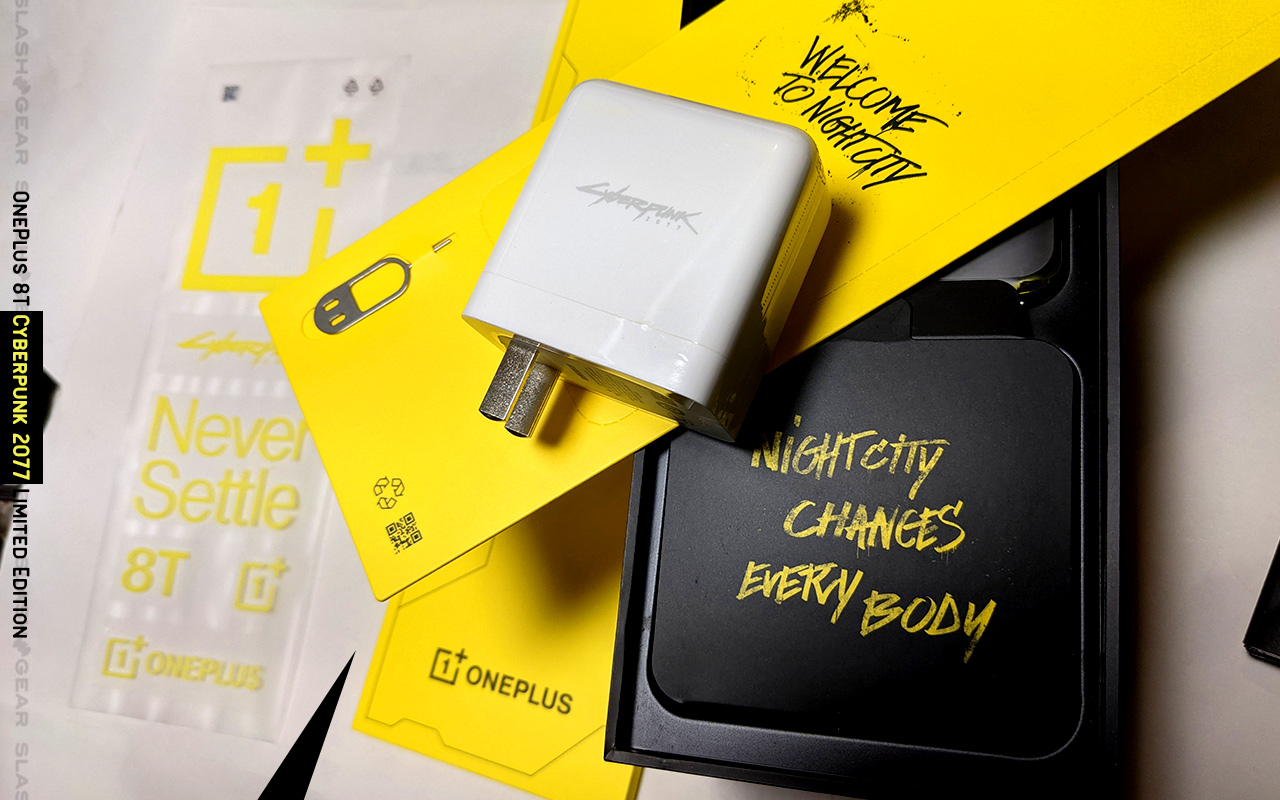 The USB cord included with the package, along with the SIM card pin, appear to be the ONLY elements that are entirely the same as they are with the standard OnePlus 8T. No Cyberpunk 2077 aesthetics included.

You’ll notice the sticker sheet in the background of the photo above. The OnePlus marks are all Cyberpunk 2077 yellow, and one Cyberpunk 2077 logo sticker is included in the bunch.

The phone! This device is far-and-away the best special edition smartphone co-branded with a video game… ever made. Not that there’ve been a bunch, but still. We’ve seen some fantastic real-world products made of design elements from video games over the past decade. This one takes the cake. 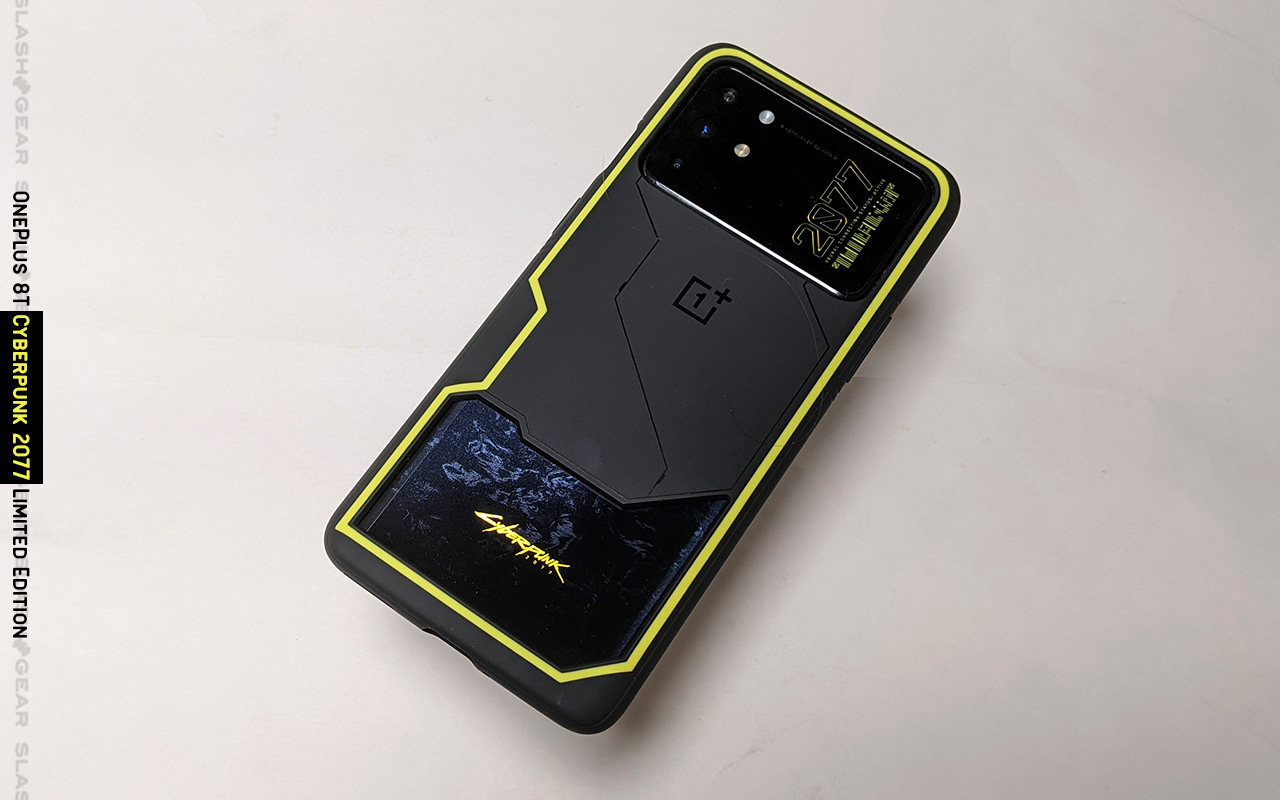 CD Projekt RED is CERTAINLY ready to capitalize on all the hard work designers did for the world of Cyberpunk 2077. They’ve already seen success – to the point that there’ve already been Cyberpunk 2077 product scalpers, WELL in advance of the release of the game.

If the attention to detail in this phone (and the elements that come with it) are any indication, CD Projekt RED intends for this game’s real-world tie-ins to stand the test of time. This is a good approach for products released alongside a game that could remain active for many years beyond initial release. 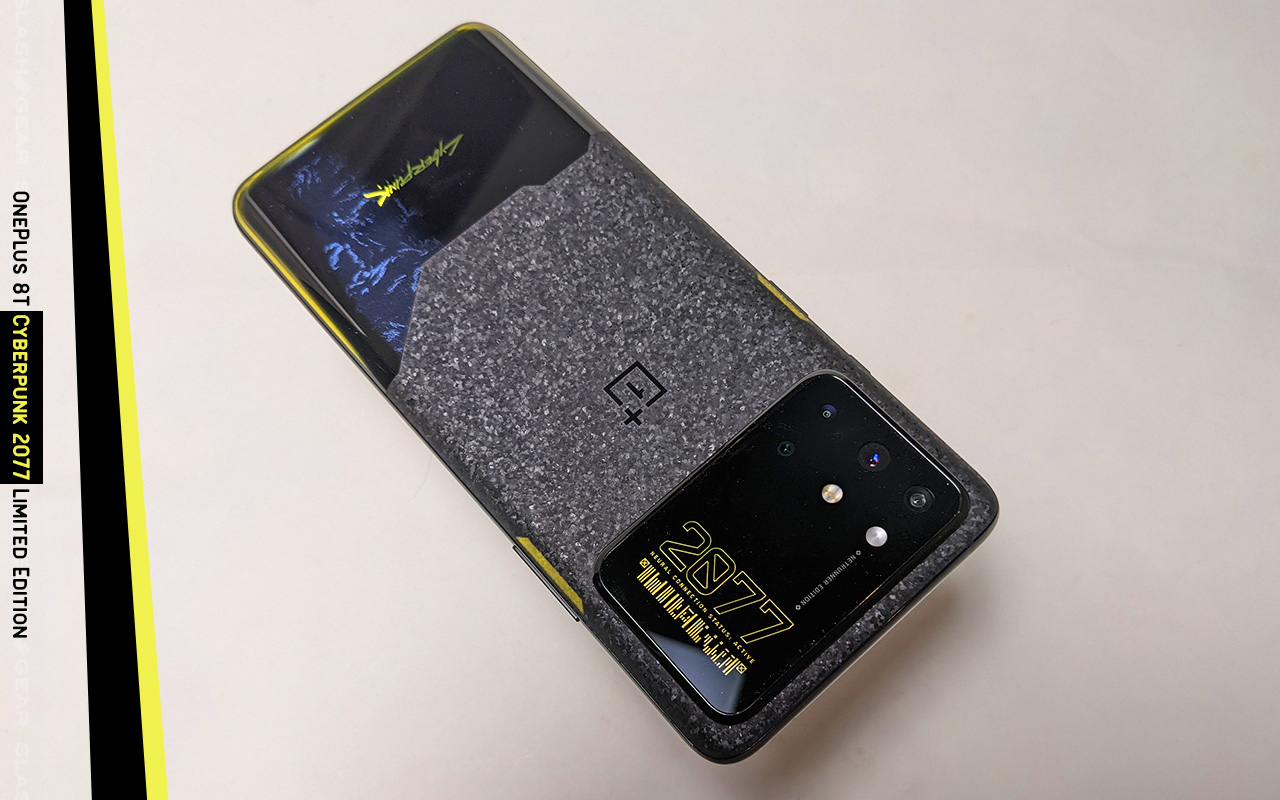 The Cyberpunk 2077 OnePlus 8T is more than just a re-skin of a smartphone. The industrial design of the product has been modified to fit the aesthetic of the game.

There’s no functional reason for this camera array at the back to be so massive. This redesign was done specifically for this one unique limited edition product, and it feels RIGHT. 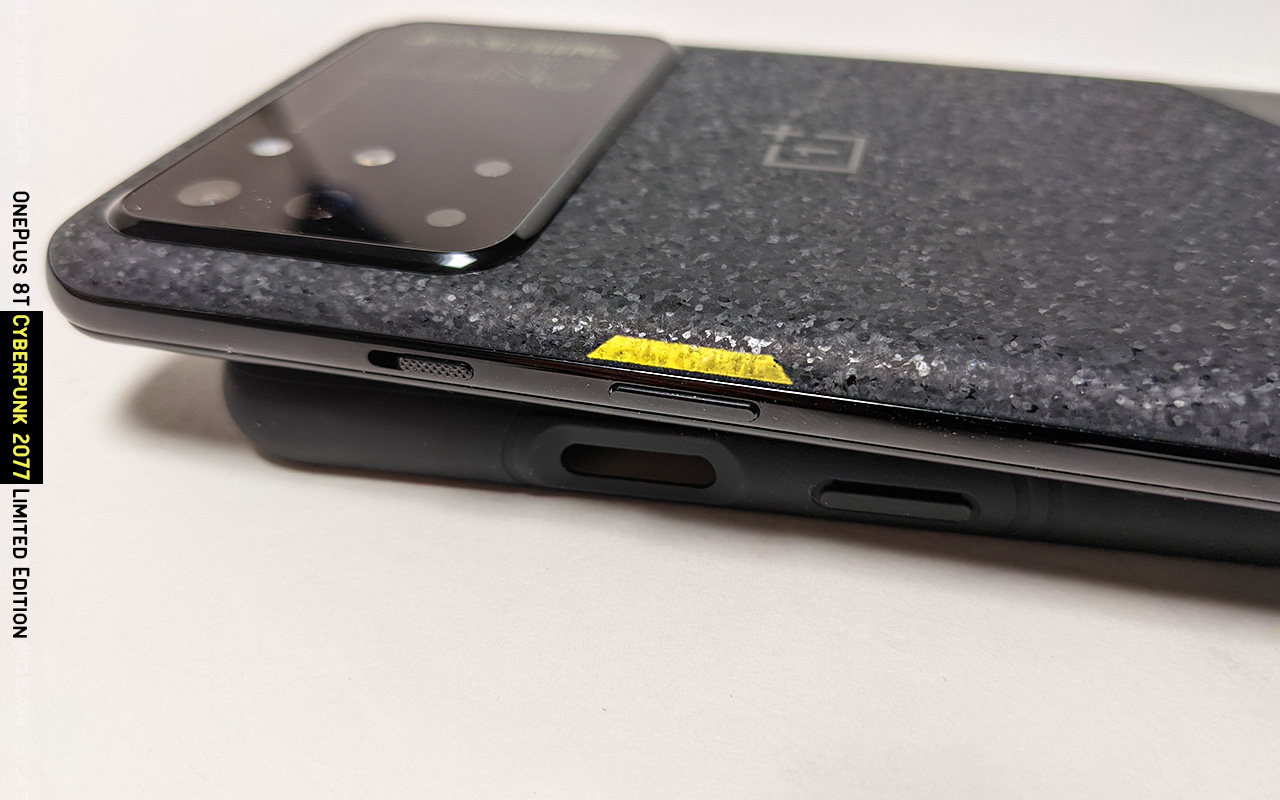 Notice yet AGAIN how the yellow implemented here is the same as the yellow in every other material included with the packaging for the phone. The yellow also appears in the custom software UI in the phone.

This phone was designed to look and feel good both with or without its official Cyberpunk 2077 protective case. Below you’ll notice the light-reflective texture surrounding the Cyberpunk 2077 logo in the glass panel at the back of the phone. This is one of multiple layers of detail and material on this device’s back side. 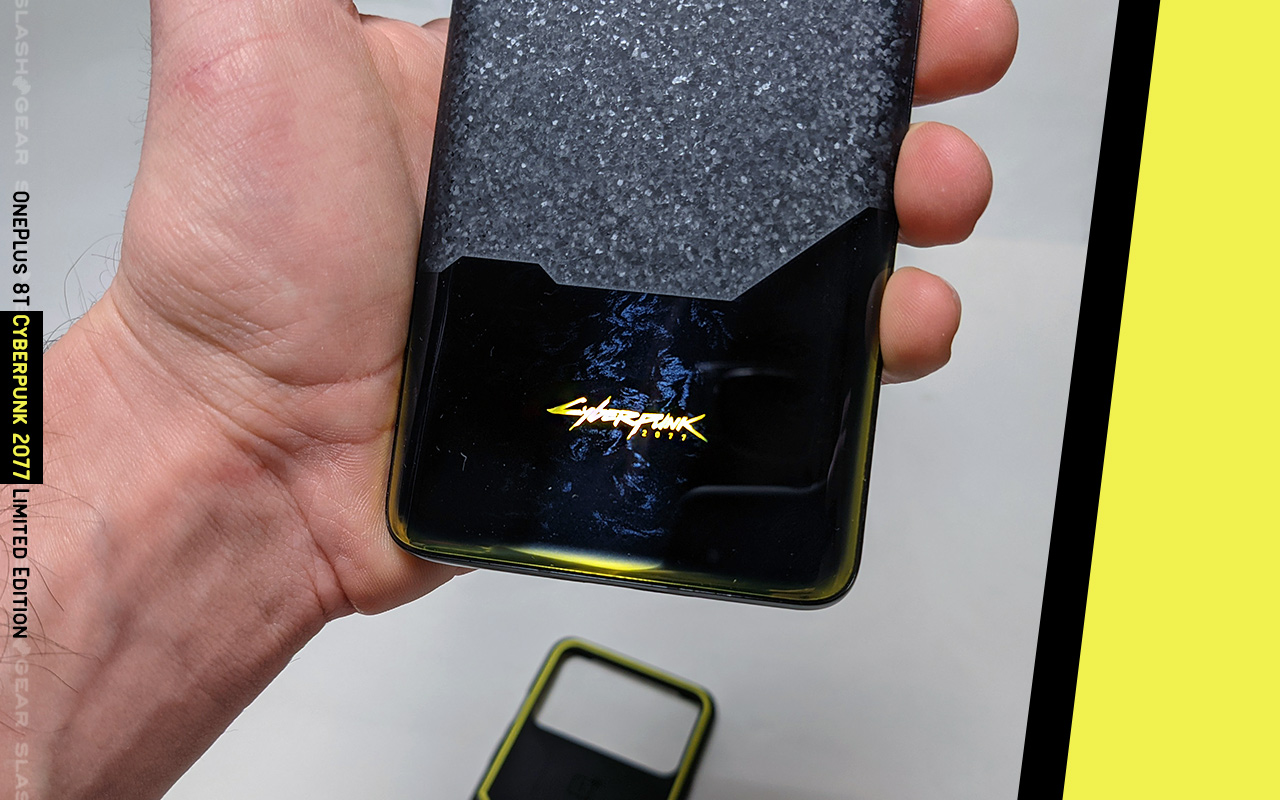 The device includes the most on-brand, yet realistically functional sci-fi user interface ever made for a smartphone. The OnePlus OxygenOS version of Android with Cyberpunk 2077 neon lights is implemented here with great aplomb.

Every black and bright light accent (usually Tron-themed) UI I’ve used in a smartphone in the past has grown irritating in relatively short order. With this device, said aesthetic is put in check by considerations like a short-circuiting neon light live background. 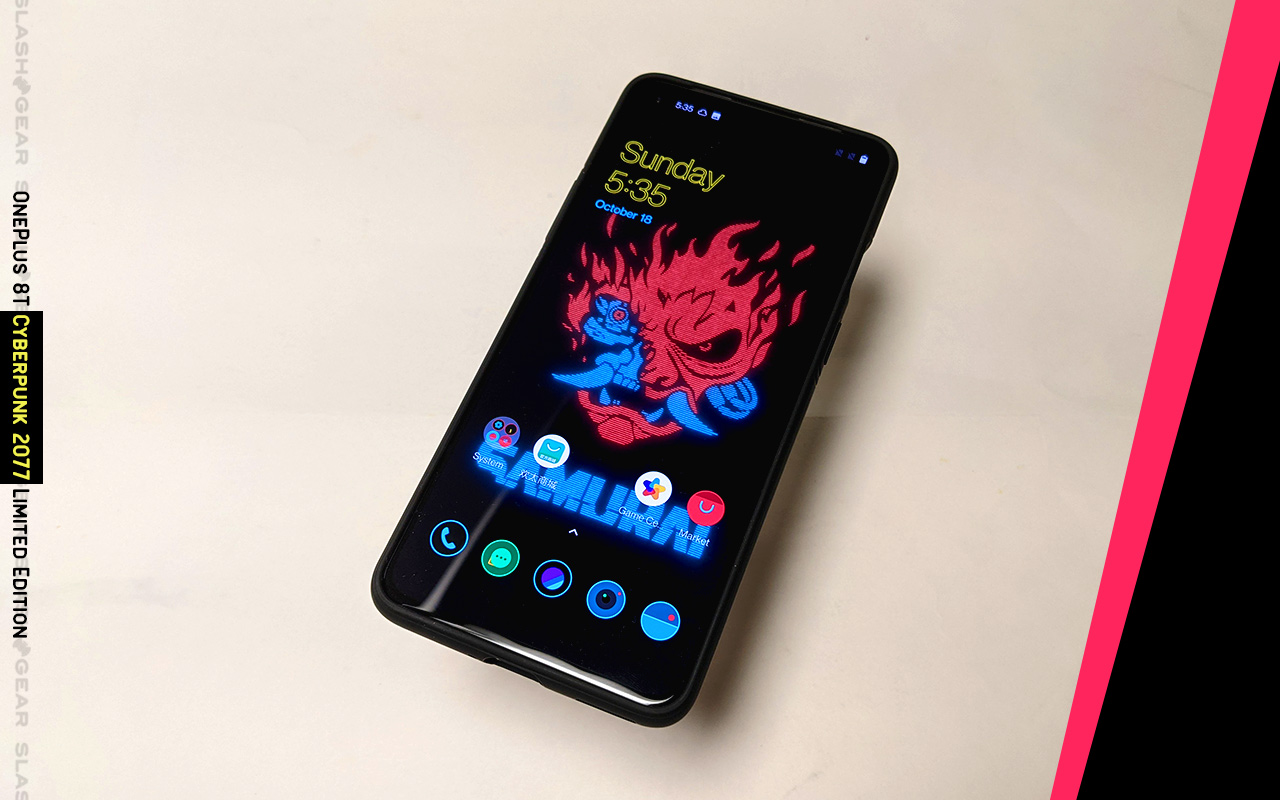 Whenever you wake the phone up (and after unlock), the SAMURAI logo background lights up BRIGHT. After a few moments, the lights appear to short out, and remain dim until the next time you’ve allowed the phone to fall asleep, and wake up once more.

Switch-on and sleep, tap, notification, and other sound elements are custom-picked to make this device look and feel like it’d be right at home in the hand of a character living in the world of Cyberpunk 2077. 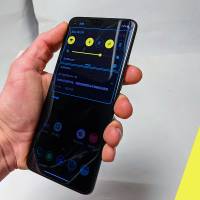 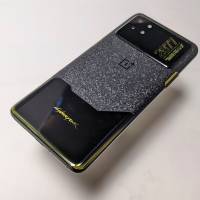 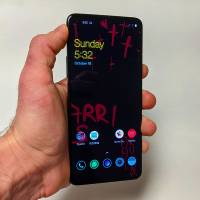 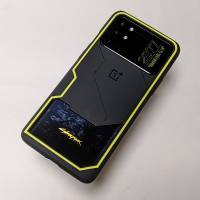 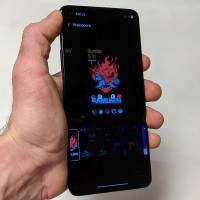 It would not be a shock to see this exact smartphone appear in the game Cyberpunk 2077 at some point in the future. Cross your fingers we’ll see more devices of this caliber in the real world in the future, too!

This smartphone is effectively unattainable, unless you’d like to pay an amount of cash that includes a certain collector’s premium. You’ll likely be able to get a OnePlus 8T (non-special edition) for around $750 USD right now. You’ll pay at the VERY least $850 for the OnePlus 8T Cyberpunk 2077 Limited Edition if by some miracle you find the device sold at retail, and that does not include the shipping cost from China.

If you’re interested in the base device, without all the Cyberpunk 2077 business, take a peek at our OnePlus 8T Review and see. This device is a very nice piece of hardware, Cyberpunk 2077 or not – of that you can be sure.