At Mobile World Congress 2012 Texas Instruments have detailed their next mobile processor OMAP 5. SlashGear got a chance to catch up with Texas Instruments to speak in-depth on each of the elements that make the OMAP 5 the most well-balanced multi-core processor on the planet. With two A15 CPU cores, two M4 CPU cores, and unique architecture tuned to so many specific graphics processes it’ll make your head spin, this is the OMAP 5 as it will exist in the mobile market soon.

Beginning by listing the massive list of impressive devices that are currently running on their dual-core OMAP 4 processor, including the Galaxy S II, Motorola Bionic, Galaxy Nexus, LG 3D, and more, 4430 and 4460 running strong in a massive display that’s all but dominated the last quarter of 2011. Though TI has thus far been concentrating on their “usual suspects” manufacturers for their chips, it is Digital Hubs that will make the big moves in the future, the OMAP 5 built with that understanding in mind. 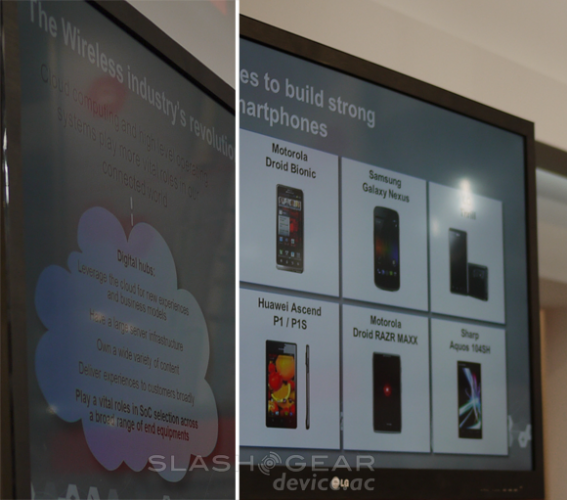 These Digital Hubs are already here with a complete software framework, in the cloud, and groups like Google and Microsoft are the biggest factors influencing the decisions made by manufacturers. Because of this, it’s important, says TI, that the OMAP Platform tends to the needs of the makers of the software and the content for the devices as well as the manufacturers starting with the OMAP 5.

Smart Multicore brings up the facts 2 cortex A15 ARM CPU units inside the OMAP 5 as well as two cortex M4 ARM CPU units as well. This is a dual-dual-core devices, four cores that allow for the A15 cores to work on their own, but to offload processes to the M4 units while they, the A15s, continue on with new tasks. Quad A9, Texas Instruments says, is outdone by 2x when put up against the dual-A15 unit. Two graphics engines sit inside this OMAP 5 chip, one for composition on its own. Security engine, camera engine, clock management, and more are included in Smart Management which addresses the tasks correctly, not simply the most brute-force way. 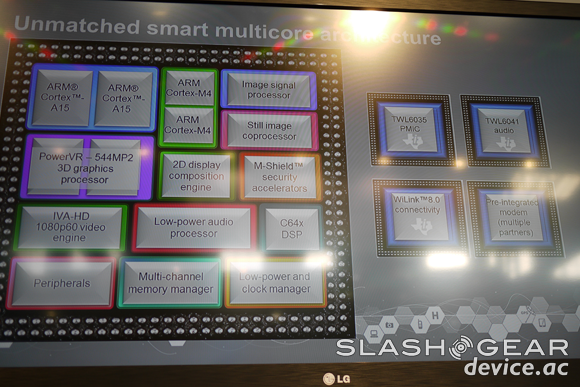 This new unit is able to handle four video cameras at once – one of the only times you’d use such a functionality is with a vehicle – several cameras in each place you need them, all run from one chip. Picture quality is first addressed with the sensor, number two is the optics, and number three is what you do in the ISP to tune your process to a specific sensor to in the end attain the best image. A set of barometers need to be tuned for each sensor in a camera setup in order for image correction, color calibration, and more. All of this has been given special care in the OMAP 5.

Why the A15 dual-core plus M4 dual-core

What Texas Instruments is showing today is the outperformance of a quad-A9 multicore architecture with just two A15 cores, that’s a dual-core from the newest generation outperforming a quad-core from the previous generation. Smart Multicore architecture is what’s allowing the dual-core to overtake the quad-core here, and by at least 35% performance improvement. Demos by Texas Instruments here have shown the improvement reaching an unbelievable 2x improvement as well. As TI notes, the ARM Cortex A15 has the best performance on single-threaded applications, currently second to nobody. The M4 then is good for multimedia, music, and the like while you run any and all of your dominant applications with one major single thread on the A15 dual-core. 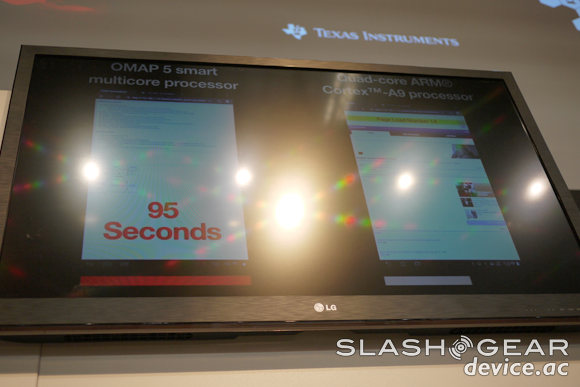 One of the points Texas Instruments want to emphasize here and an element which they feel too many groups ignore is the issue of a Thermal Budget. When you hold a smartphone, you have a certain amount of allowed heat that you’re going to be OK with – this is true of everyone who has used a smartphone for any kind of extended period of time. A user’s comfort zone is what we’re talking about here. TI makes the example of working with a quad A15 processor, saying that working with such a titan would simply get too hot too quickly for anyone to work with it reasonably.

This is an architecture that is not in isolation. The OMAP 5 is trying to address a realistic problem: a chip that needs to fit into a mobile device but will also be able to fit into a variety of other equipment. We have to be clever, says TI, otherwise the resulting device reaches a thermal envelope very quickly. On a PC the heat can go out the back, on a laptop the heat can go out the bottom and out the back, but when you hold a device in your hand, the heat has to dissipate.

Within the Thermal Budget, who can reach the best performance? This is the question for the mobile age in processors, so says Texas Instruments.