The team that created the robotic sphere known as Sphero is back. Sphero was first revealed in 2010 and continues to have no rival – there’s simply no remote-control device on the market like it. Here in 2014, Sphero (formerly called Orbotix) brings Ollie (originally code-named Sphero 2B) to market with a completely new form-factor – a cylinder. 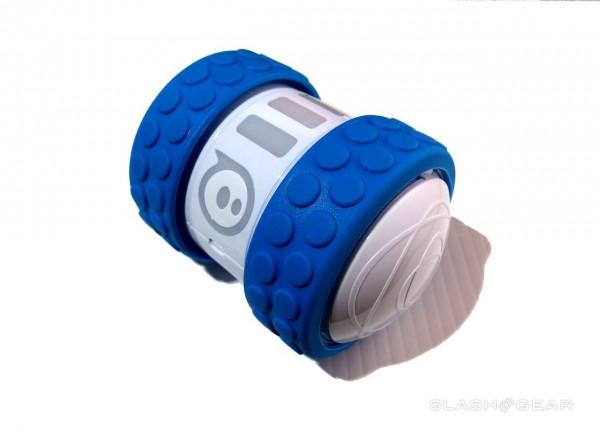 You’ll be connecting to this device with your smart device using Bluetooth LE – that’s Bluetooth 4.0, and in this case it means 30-meters of wireless connectivity. Compatibility at launch will be with iOS and Android. 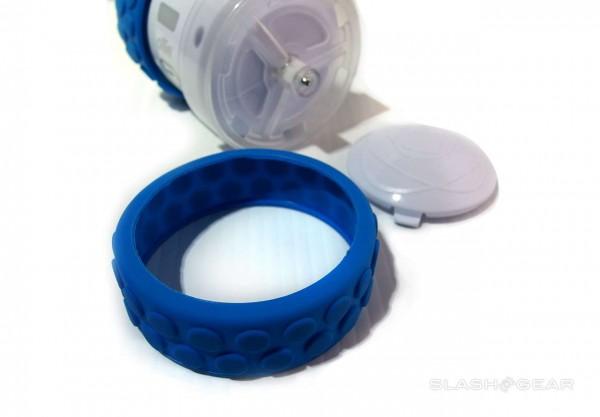 Sphero suggests that the Ollie can reach up to 14mph, or 6 m/s. We’re inclined to agree. Ollie runs best on an open plane, speeding and doing tricks best when everything is flat. 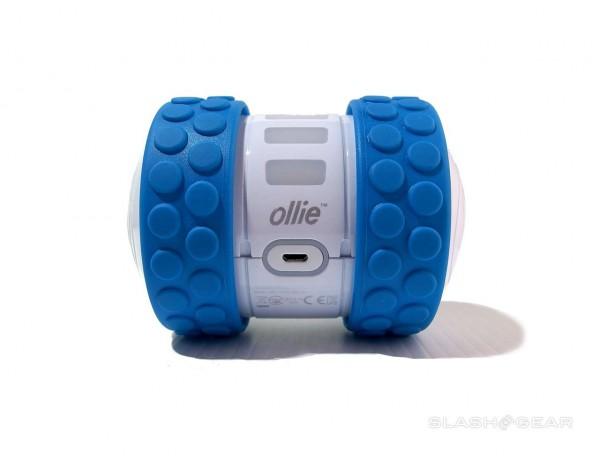 Charging this device means plugging in with a microUSB cord – also included in the box. Full charge time is around 1-hour. There are no buttons on Ollie – instead you’ll need to plug in a power cord to wake it up. 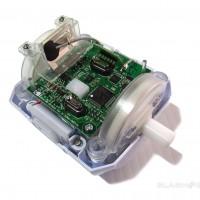 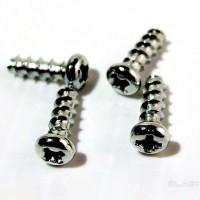 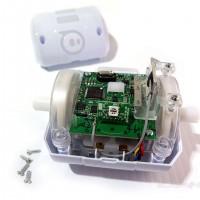 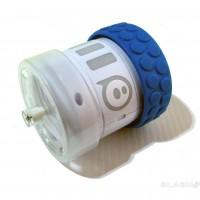 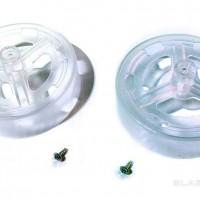 Above you’ll see what amounts to a very rudimentary teardown of the Ollie. It’s not recommended that you do this at home – we were just interested in what this machine looked like on the inside. Simple as pie, right? 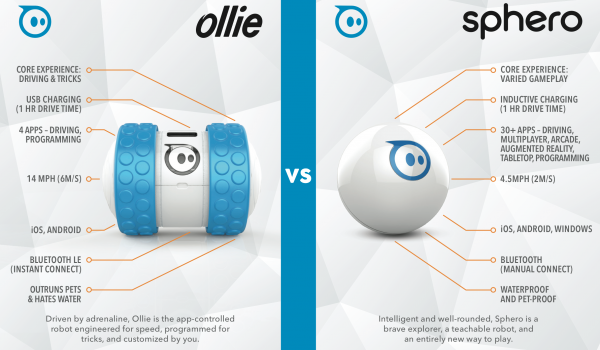 Above you’ll also see a basic comparison between the Ollie and the original Sphero. Control is surprisingly similar – they’re both smarter than they look at first glance. This isn’t your everyday ordinary remote-controlled vehicle experience!

Today I’m reviewing (mostly just) the hardware. Here before the device is released to the general market, Ollie has just one test app to work with. This app works with iOS, for iPhone or iPad, and provides directional control as well as gesture control.

The first app we’ve been provided to demo the device is strange. It took me a few minutes to understand exactly what was going on with the two separate control setups on the same screen – and I was surprised that the first test app didn’t include a simple “this is the left track and this is the right” setup. Once acclimated, on the other hand, these controls became a satisfying challenge to master.

NOTE: at least 4 apps are in the pipeline already, including those for pure driving and for programming.

We’ve reached out to Sphero about the possibility of a two-track app like we used in our LEGO MINDSTORMS EV3 robot review earlier this year – we’ll hear back about it soon. For now it’s more of a “tell the device what you want done and it’ll handle the necessaries.”

UPDATE: Sphero suggests that individual controls for each wheel isn’t exactly in-line with their vision for the product, so to speak.

Adam Wilson, Co-founder and Chief Software Architect for Sphero suggests that “no it probably won’t be an official part of the Ollie app. Ollie uses the human as a reference for where to drive, i.e. if you are pressing forward and Ollie wipes out, it still knows where forward is. With this tank type of system, it just goes back to “legacy” remote control type driving. You have to put yourself in the position of the vehicle and this isn’t really what Ollie is about.”

Wilson adds, “that being said, the SDK provides individual control of each side, and we will probably put out a sample application that has “tank style” driving for Ollie. But not in the public facing version, it’s just not a good enough at high speeds like Ollie has, we tried it.”

Just like its predecessor, Ollie is controlled exclusively by your smartphone or tablet. If you do not have either one of these kinds of devices run by either iOS (iPad or iPhone) or Android, you will not be able to control Ollie.

At this time there’s one app for iOS, but we’ll see both Android and iOS apps of many sorts in the near future. As of June 3rd, 2014 – four years after its first appearance – the original Sphero also has control apps for Windows and Windows Phone. We’ll expect quicker adoption this time around.

Ollie will be available immediately and will be shipping worldwide starting on September 15th, 2014. You can find it through GoSphero.com where – at the time of this review’s first publication – it’ll be available for preorder.

Ollie will cost you around $99 USD, while accessories will be priced individually. Included in the accessories collection will be unique tires, new hubcaps, and a Bluetooth ramp.

Is Ollie an awesome toy? Yes, absolutely. Is it something you should buy for your child, co-worker, friend, or otherwise friendly associate? Yes. You’ll be doing the right thing for everyone involved.

We literally cannot imagine how someone would own this device and not enjoy it. It’s radically designed, fun to use, and has a massive amount of potential.

Stay tuned as this review continues to expand with new accessories and expanded app use. This is not the end!