The universe in which this LEGO MINDSTORMS EV3 unit exists is not one made for a tiny, limited cross-section of creative children and those that want to see their models move. When you see “10+” on the package for the LEGO MINDSTORMS EV3, you’re going to need to understand that this does not mean it’s excellence is relegated to kids. You’re also going to need to recognize immediately that this is not just a toy – it’s a platform.

The LEGO MINDSTORMS EV3 was released last year in August, which would normally mean we’d be looking for the current year’s model to review sooner than later. LEGOs don’t work like smartphones, however, and the refresh cycle works in an entirely different way. 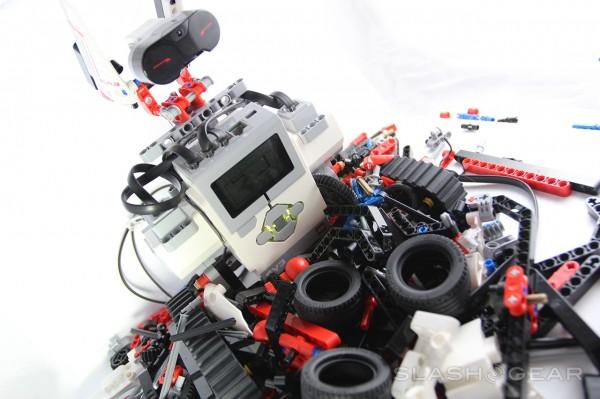 What you’re seeing here is a platform that’ll be allowing creative individuals of all ages to create interesting and inventive amalgamations of bricks for generations to come. There’s a LEGO MINDSTORMS community out there that allows builders to show off their unique creations – there you’ll find models with all three (main) waves of MINDSTORMS base parts. 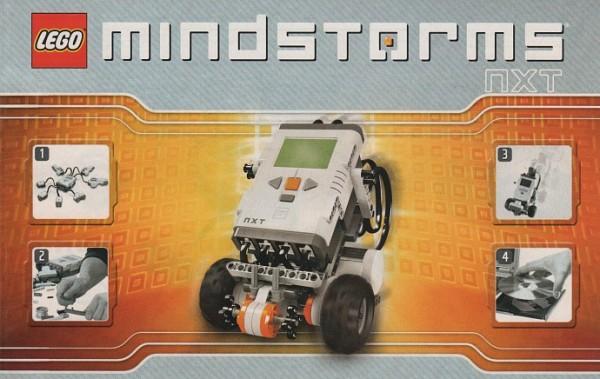 Above you’re seeing an older NXT set – below is the box for LEGO MINDSTORMS EV3, the set we’re reviewing in the article you’re in here. 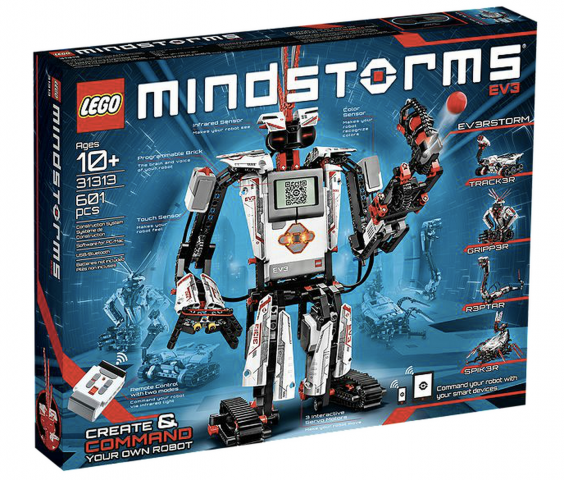 Back in 2006, the first modern MINDSTORMS NXT unit was released. This was the first programmable robotics kit released by LEGO, followed up by the NXT Educational Version, the NTX 2.0, and the MINDSTORMS EV3. There were “robotic” LEGO predecessors to MINDSTORMS as well – all leading up to the EV3 we see today.

We’ve been following this beast for a while. We saw it earlier this year at CES 2014 – most recently we’ve seen it hitting Seattle for the “Build 4 Good Robo Challenge” where a pill-sorting machine was made out of it for the win. This challenge was inspired by a fellow by the name of Shubham Banerjee. 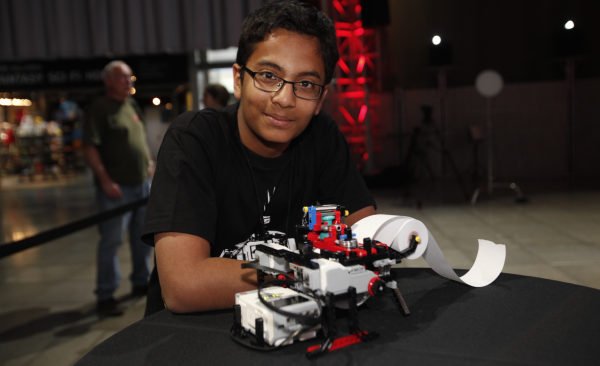 Above you’ll see Shubham Banerjee, a 12-year-old inventor who took a LEGO MINDSTORMS EV3 kit and built a Braille printing kit. Bringing 3rd-party elements like a roll of paper into this equation can bring about – as you can see – some extraordinary bits of ingenuity. 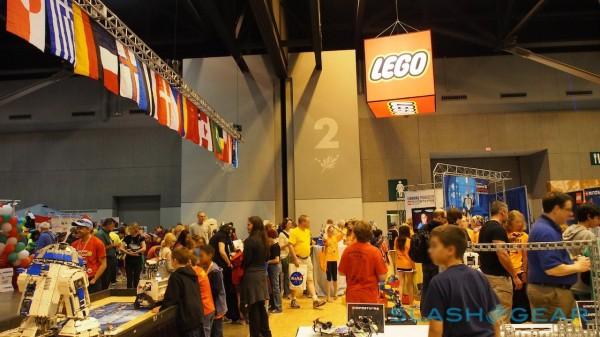 Most recently you’ll find LEGO MINDSTORMS taking part in Dean Kamen’s FIRST Championship 2014. It all comes down to the Intelligent EV3 Brick.

This Intelligent EV3 Brick is the largest piece you’ll see here in any one build, working with 6 physical buttons and an array of ports. These ports allow you to connect to your computer as well as the excellent cross-section of sensors and motors included in the box. 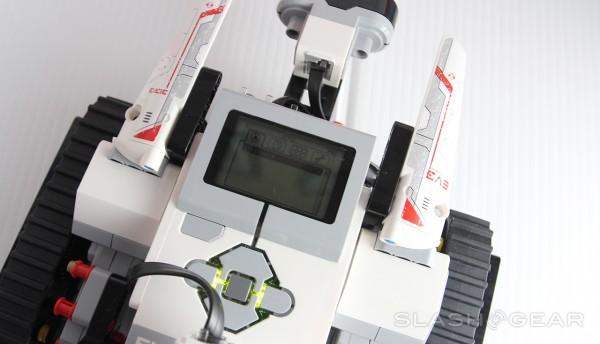 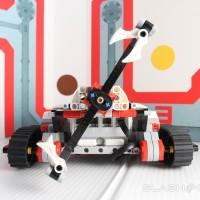 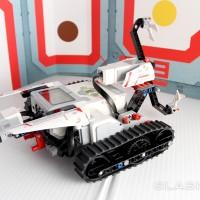 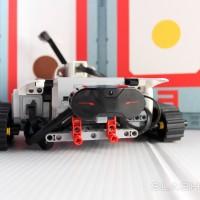 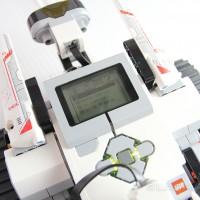 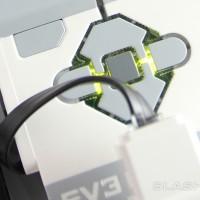 You also get a number of LEGO-made modified RJ12 cords to connect your sensors, beacon, and motors to the EV3 Intelligent Brick. These are the strangest bit of the whole kit – we’re expecting that future iterations of the MINDSTORMS setup will include slightly less bulky cords – if any cords at all. 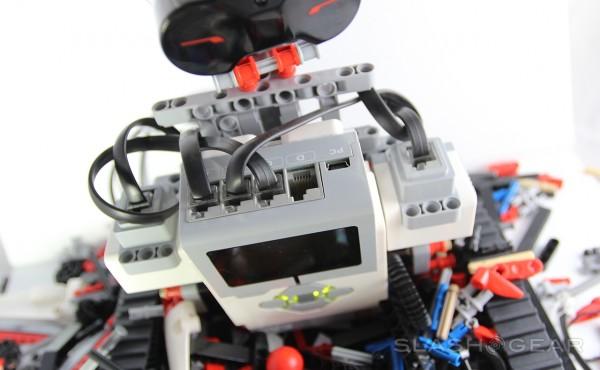 Each of the sensors and motors you receive are relatively large. These sensors certainly aren’t meant to replicate the super-tiny relatives set in the smartphone you’ve got in your pocket. They do work, though, and they’re quite accurate – for a “toy,” that is. 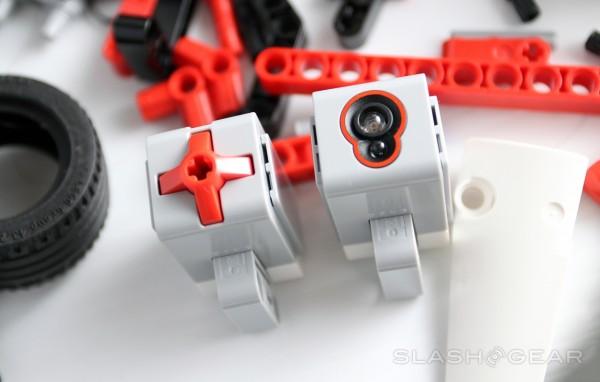 With the LEGO Technic pieces you receive in the box, you’ll be able to make a massive number of remote-controlled and robotic devices. As is implied by the box, this device takes LEGO-centric creativity to the next level.

Above you’re seeing a set of LEGO MINDSTORMS EV3-based creations made for presentation at CES 2014. Watch out for those chompers. 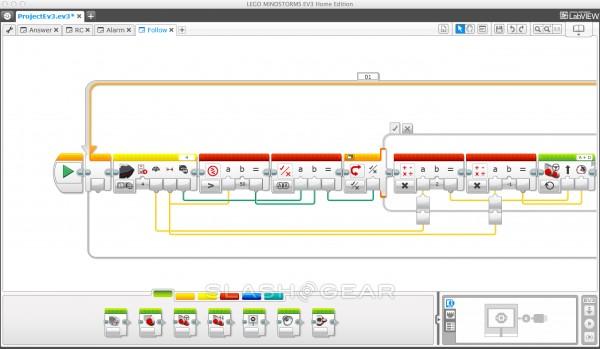 In this relatively easy to learn software you’ll be able to program each of the moving parts available in the EV3 kit. Each of the ports you see on the main Intelligent EV3 Brick can be connected to one of the elements included in the pack, all programmable therein.

You’re also able to program the EV3 setup to react to certain stimuli – there are sensors here, after all. Program a danger-seeking robot to roll in reverse whenever it sees the color red, if you wish. 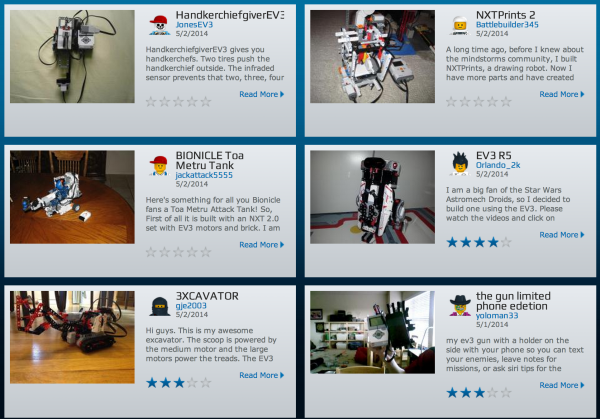 The commands you program in the software can be saved for use by any LEGO MINDSTORMS EV3 kit. This works extremely well in the LEGO MINDSTORMS community, where users create kits and upload their software, making it available to any other user who would choose to re-create it. 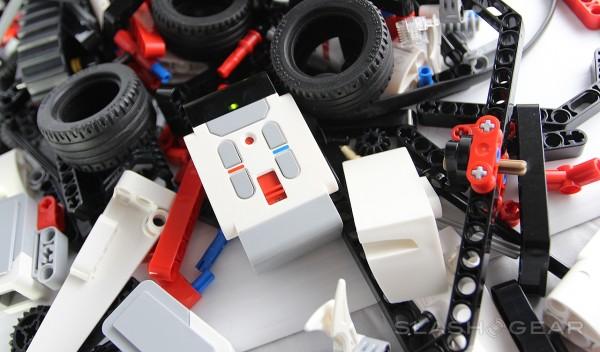 In the box is one simple infra-red connected controller – working with the piece you’re recognize as this robot’s head. With the basic TRACK3R build, this controller allows you to control the forward and backward tracks of the robot – moving the switch in the center changes your control set, allowing you to command the blender. 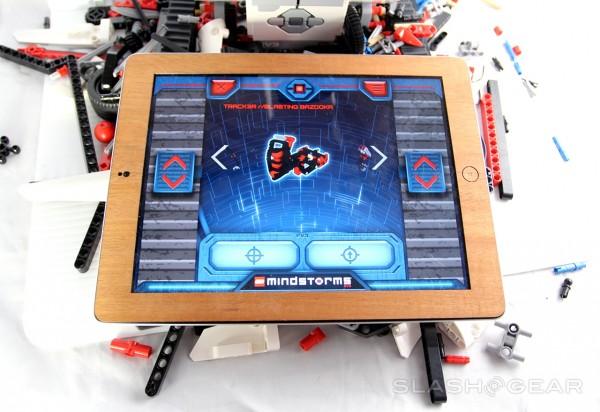 This system also allows mobile device connectivity. Smart devices, that is – like the iPad you’ll be seeing in our control demo here.

What you’re seeing here is the most basic, simple setup you’re offered in the LEGO MINDSTORMS EV3 box. This robot is called the TRACK3R, and it’s made to present a number of basic functions.

You’ll be able to independently control each track, forward and backward, and whatever third element you connect. Here we’ve got the blender – you can also connect such oddities as a LEGO hammer, ball cannon (several tiny red plastic balls are included in the box as well), and a claw. 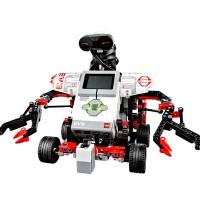 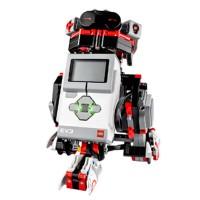 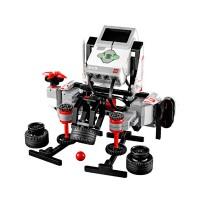 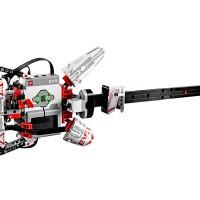 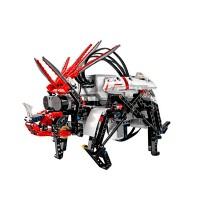 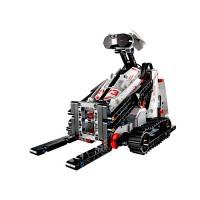 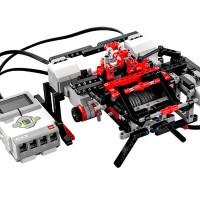 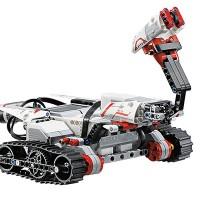 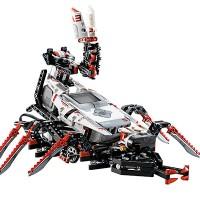 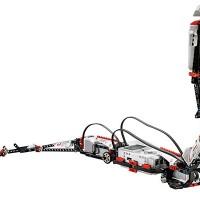 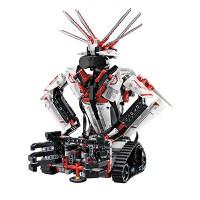 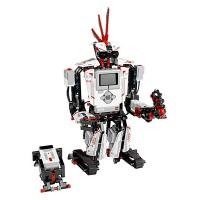 Above you’re seeing a selection of images of these builds. These Official LEGO builds have PDF-based instructions available through the MINDSTORMS website as well.

These images barely scrape the surface of the wild amount of builds – with fan-made instructions – available from the LEGO MINDSTORMS community. Everything from a LEGO mech-monster to a LEGO pile auto-cleaner. Make em all!

I can’t emphasize enough the importance of this initiative. The LEGO brand has the ability to inspire – they’ve got brand power that connects to potential builders on a level unparalleled in our modern world.

What’s more – LEGO has done an excellent job of creating this set. They could just as easily have pushed a much simpler setup, relying on their brand to sell sets. Instead I – and we – get the sense that LEGO truly wants to push this environment forward. To inspire and enliven creativity in as many people – not just youngsters – as they can.