We entered the room Oculus VR had prepared for us not knowing exactly what we were in for. Not the Samsung Gear VR – surely not – that’s already nearly a consumer product. Instead, Oculus had a padded room ready for us. Not because the SlashGear team is ready for straight jackets, but because this demonstration required that we be in as quiet an environment as possible. This demonstration – of the newest Oculus Rift headset prototype Crescent Bay, beyond the DK2 – required that we stand on a platform 4 feet by 4 feet wide in the center of a room that was perhaps 12 feet square. We were dropped immediately into a series of demonstrations.

An array of demoes were played one after the other. In one we were in a room with a mirror. In that mirror, we were able to see a set of masks, each one following our own face as we moved from side to side. Our faces can be tracked right now in a soft of flat manner – smiles, frowns, and all manner of funny faces might be next.

Another demo showed a rubber duck and a couple of robotic arms, not unlike the helper droid in the first and second Iron Man movies. These two robotic arms moved toward us and very near us – it was here that we realized we could duck. 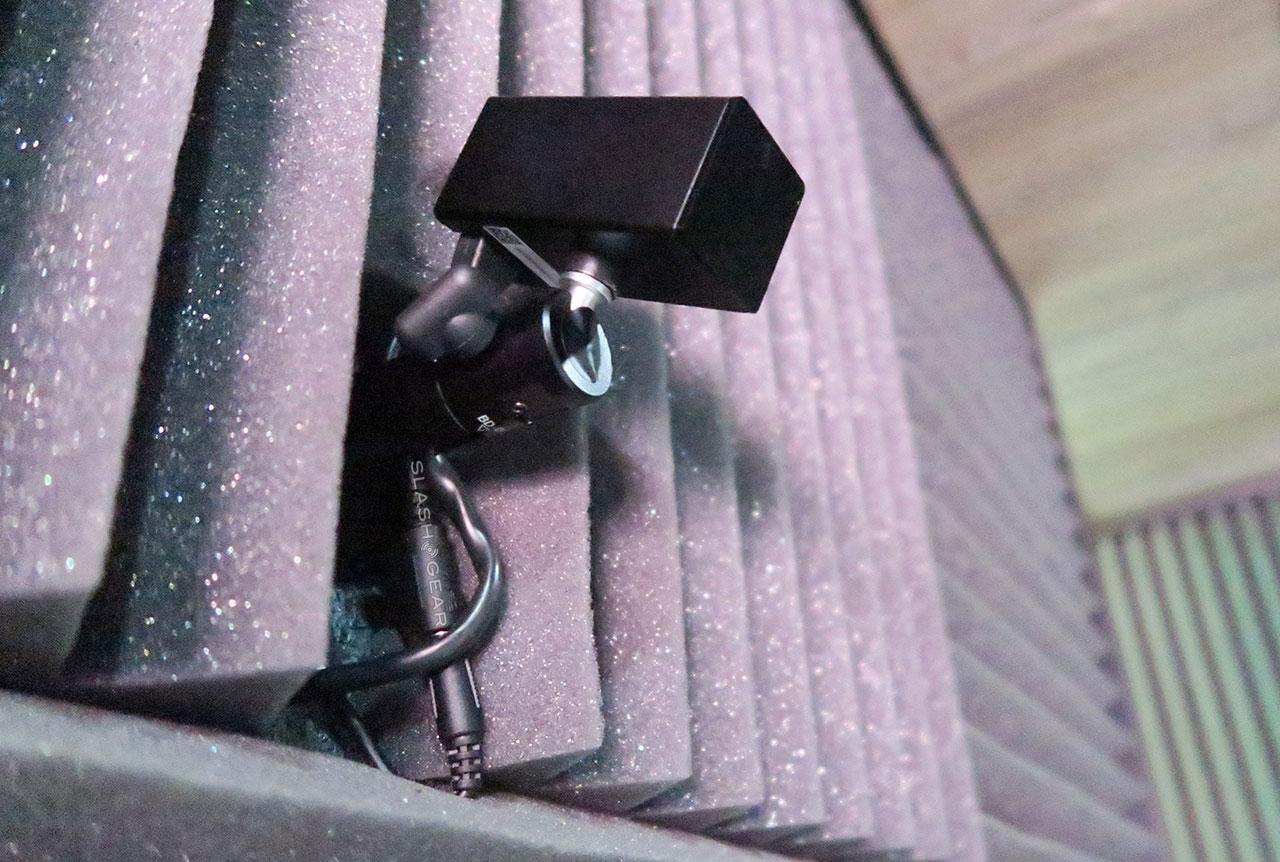 ABOVE: The next camera for the Oculus Rift, required here to allow us to move through 3D space.

And just like that, yet another dimension was opened up. If one of these arms were to move toward us, we’d flinch, but instead of standing there like idiots, we’d duck.

This demonstration worked with 3D sound. While stepping on stage with Paul McCartney is great, one thing is missing – or was missing until Oculus VR took a stab at it. With 3D sound, the environment around you moves as you move your head.

You might be saying – didn’t the environment move around my head when I moved with previous iterations? Yes, but now the sound moves with it. 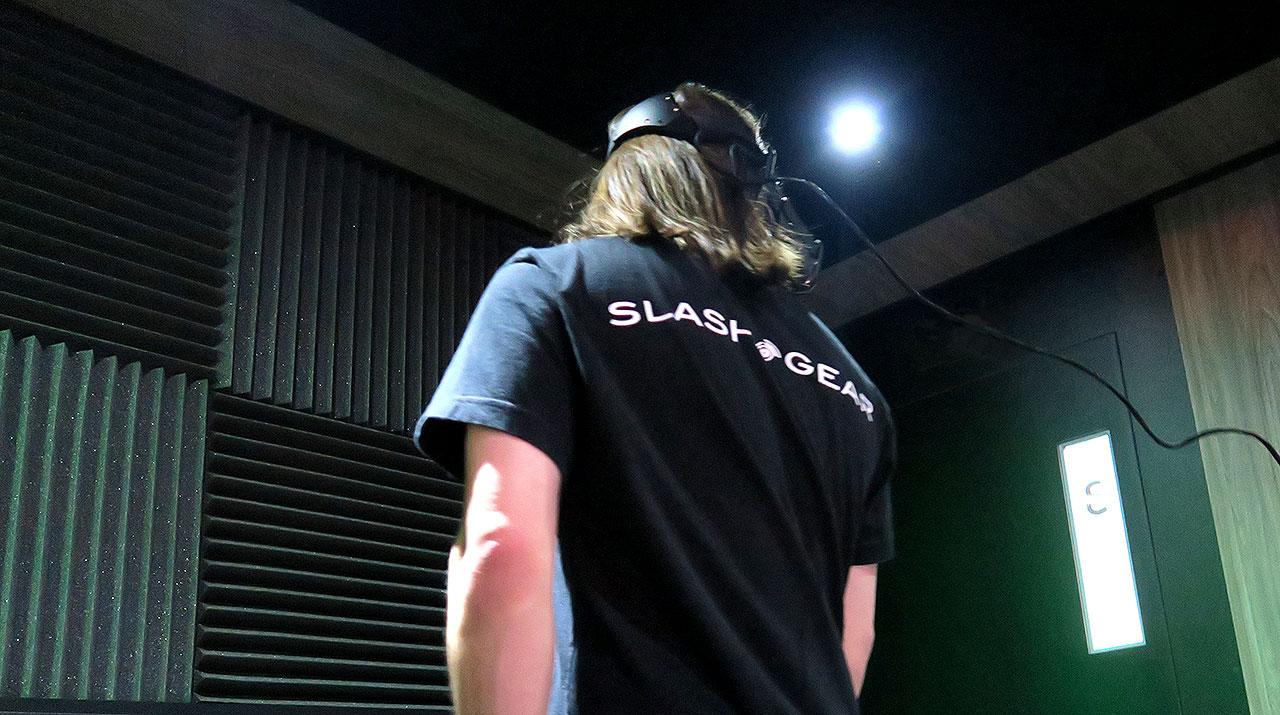 If I’m watching these robot arms battle one another in front of me and I turn my head to watch the rubber duck one of them has thrown behind me, their robot clanking noises move behind my head, exactly where they should be.

Another demonstration had a tyrannosaurus rex walking toward us in a museum hallway. While we weren’t exactly able to move far enough out of the way to avoid this dinosaur completely – we’re on a 4-foot platform, after all – our much more dimensionally-aware space was made entirely clear.

Once the t-rex walked up to us and began walking overhead (she was fairly tall), we were able to watch her pass overhead, and move very close to one of her legs to see the texture of her skin as she passed by.

Most shocking of all the demonstrations in the new broadened space Oculus showed off was a platform on top of a tower in a city. If I’d been especially afraid of heights, I might have thrown up in terror. 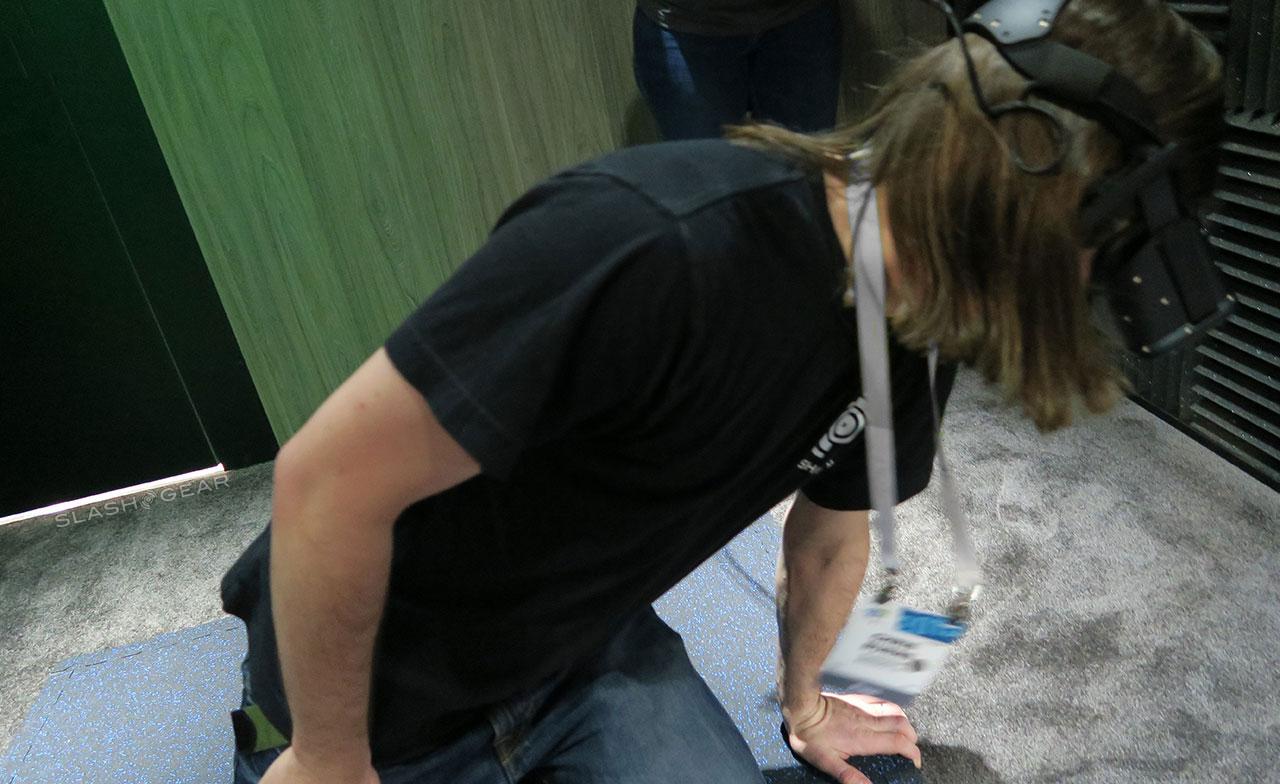 The platform was the same size as the block we were standing on in the non-VR world. Walking to the edge of one meant we’d reached the edge of the other.

Running my toes along the edge of the block gave me a rush. Here I was, hundreds of feet in the air, just standing on the edge of a block without railings.

I had to kneel down.

I knew it wasn’t real, but I had to keep telling myself.

I expected Morpheus to pop in and tell me I was plugged in to The Matrix.

Then our Oculus VR guide said there was one more demo, and that they’d saved the best for last. The best ended up being a demo that I’d seen before – the same Unreal Engine 4 demo shown at the NVIDIA Editors Day event just a few months ago.

ABOVE: The Unreal Engine 4 demo as shown earlier this year – this is essentially the same environment we’re in here in January of 2015, but instead of sitting in a chair, we’re able to explore far more in-depth.

When it was shown at NVIDIA’s event, this demo was only available as a sitting-down sort of situation. Almost as if you were being wheeled through a war zone on a cart. That demo was also shown on an Oculus Rift DK2.

Here with the prototype for the next Oculus Rift headset, complete with motion camera in this room where we were free to wander (anywhere on this 4-foot platform), the demo became much more immersive. Before we were only looking around, now we were able to move around.

We’re still being pushed through the environment like we’re on a cart, but here with the newest demo we were able to get down and close to objects, move around, and get a much more feel for the vastness of the space. 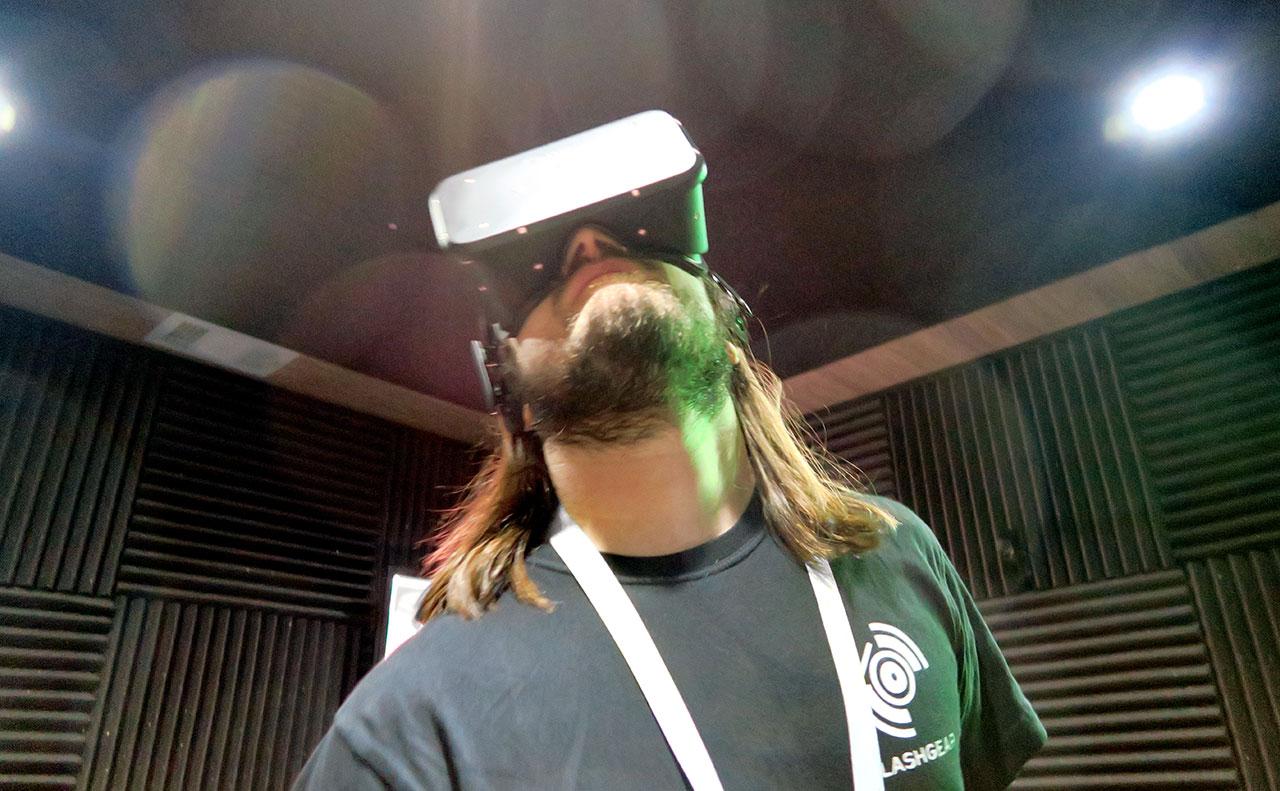 Detail we couldn’t have seen before was plain – I watched a soda can fly overhead, moved toward it, and read its name as its aluminum exterior glinted in the sun. Rocks passed by my head – again I ducked like I did with the robots earlier on in the demo. Bullets wizzed past.

It was here that I couldn’t help but reach out, only to be disappointed at the lack of myself in this virtual reality. While Oculus VR is working with companies that specialize in the tracking of gestures – and therefor our bodies – for now you’re a ghost. Or you’re a ghost in these demoes, at least.

At the end of this Unreal Engine 4 demo there’s a robot monster that’s meant to surprise you with a quick jerk of his head down and toward your face. While we were met face-to-face with this fellow back at the NVIDIA event, here the open environment – enabled by the new camera – allowed us to sit down and allow the robot to jam forward overhead.

Instead of looking him in the face, we were watching him jam forward from below, looking at his chin from underneath.

Then it was over.

And I had to return to the real world, where if there were really a dinosaur coming toward me in a museum hallway, I’d have far fewer concerns about how well I’d be able to hear him as he lumbered overhead. 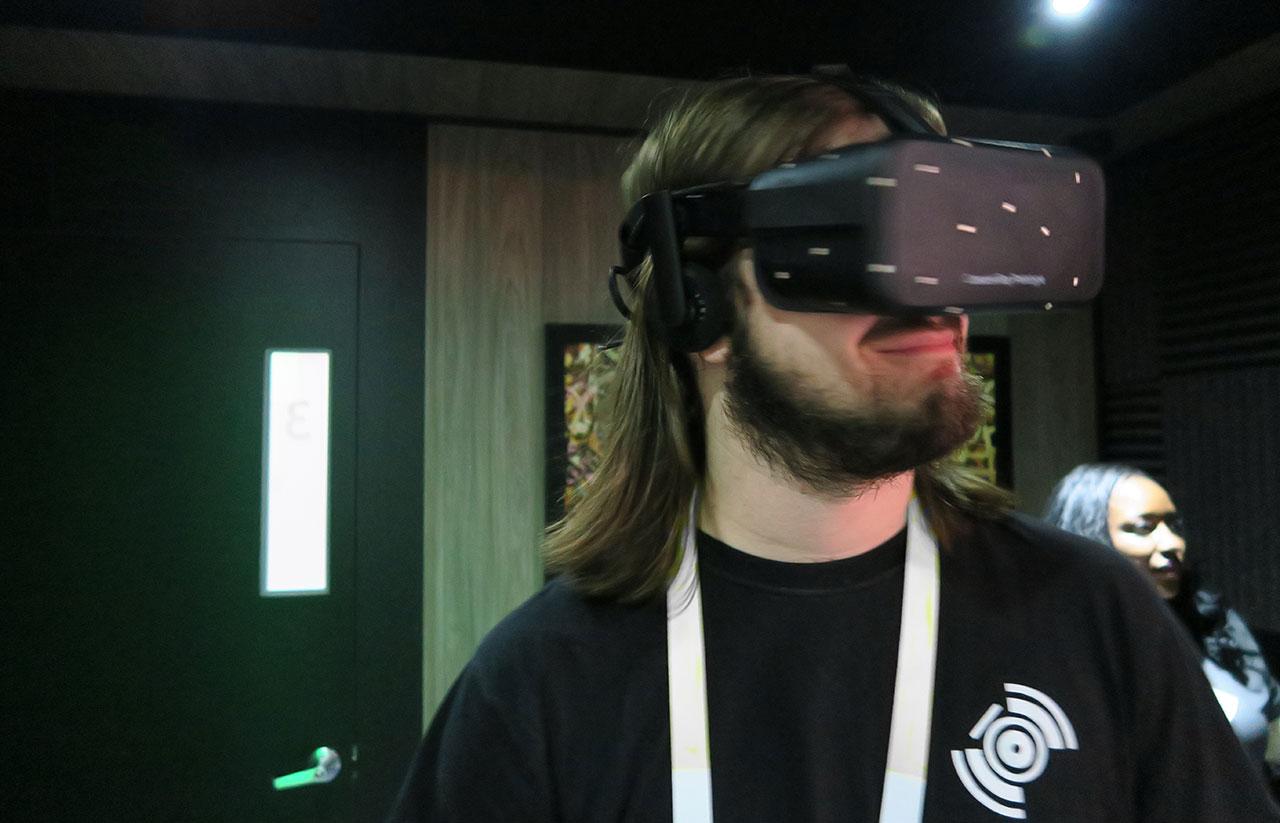 I couldn’t help but smile over how magical it seemed. Again, I’d seen this demo before, but the amount of expansion that’s happened between then and now … it was amazing.

Also – believe it or not – this demonstration made me more hesitant to purchase an Oculus Rift device than ever before. Not because it wasn’t awesome – it certainly was – but because of the speed at which Oculus VR are advancing.

Meanwhile have a peek at what Razer’s OSVR platform is doing to make the industry move even faster than it has been. It’s a brand new plane of existence to get lost in!