Fans of the West Wing – and of getting greater insight into how the US government ticks – will be excited to hear that today is Big Block of Cheese Day, with the Obama Administration throwing open the virtual doors and answering public questions across social networks. Named after the fictitious day when West Wing‘s President Bartlet and staff took questions from special interest groups, however wacky, according to The White House the real thing will be playing out today across Facebook, Twitter, Google+, Tumblr, and Instagram.

The day of extra-openness follows President Obama’s State of the Union address yesterday, and is the latest in the White House’s increased use of social networking tools to reach a greater number of voters. That includes some who might not normally be concerned with politics, but who are committed to Twitter and other feeds.

The sessions kicked off at 9am this morning, and will continue through the day with commentary on the climate & energy, immigration, the minimum wage, health care, foreign policy, and more. Featured staff include Obama’s Senior Advisor Dan Pfeiffer, White House Press Secretary Jay Carney, and a host of experts on each specific issue.

In fact, a Google+ Hangout dubbed “From Daycare to Diploma” with Secretary of Education Arne Duncan has just started at time of writing. 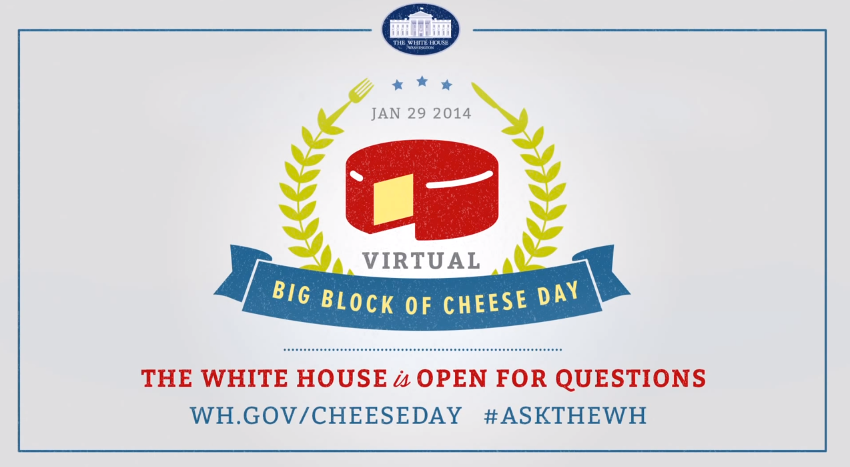 Best of all, the Obama Administration persuaded some West Wing cast members to return for a one-off video to launch Big Blog of Cheese Day, including Bradley Whitford who played Josh Lyman.

The day itself was named in a nod to President Andrew Jackson, who back in 1837 brought a 1,400 pound of cheese to the foyer of the White House, and invited American citizens to come in, have a snack, and ask questions around governance. This time around, though, you’ll have to supply your own food, but the reach of the event will be far broader.