It’s time to check out Batman: Arkham City for the first OFFICIAL time running with NVIDIA’s DirectX 11 Graphics and GPU Physics, certainly a sight to behold and set to be released on November 15th! In short, this game Arkham City builds on the ground-breaking 2009 game by the name of Batman: Arkham Asylum, one of the first games on the market to make use of Hardware-Accelerated PhysX effects which enhanced not only background details but incidental items as well, plus whole levels such as, as NVIDIA notes, the Scarecrow’s nightmare world* (*included at the end of this post, for those of you that’ve never been there.) Now behold, footage from Arkham City, a game running with the graphics card it was made to run with, the NVIDIA GeForce GTX 560, with PhysX enabled for the greatest amount of detail you can imagine!

On the left of the screen here you’re going to be seeing the NVIDIA GeForce 8800 GT, still one of the most popular graphics cards in many gamer circles including amongst Steam’s 35 million gamers. NVIDIA gives the statistic: “the 9800 and 8800 are one in the same, and combined account for 9.69% of all graphics cards used on Valve’s service.” What you’re about to see is a massive amount of additional bits, essentially, smoother movement and more detail than your eyeballs can handle. Pay special close attention to the bank notes, for starters, starting at 33 seconds into the video. Notice how they float around not just based on some pre-arranged path, but based on the people moving through them and even Catwoman’s whip cracks.

At 41 seconds in, you’ll see a “fully functional steel mill” which without GeForce GTX has only canned animations. With GeForce GTX activated, your CUDA Cores create hundreds of shiny particles that not only bounce off surfaces all around, they bounce off yours and the computer’s characters as well.

In the next scene there’s smoke, in the scene after that there’s another heavy amount of paper bills floating around, and all throughout your brain will be melting with the pleasure that comes from seeing TOO MUCH awesome stuff going on in a single gaming screen. Then there’s one more bit you’ll need to know for now, and it’s about tessellation. With PhysX effects you’ll now be able to enable enhancements including DirectX 11 tessellation. You can see the result of this new property in the image below, it showing Catwoman at rest in front of one of Batman: Arkham City’s tessellated environments

Detailed enough for you? 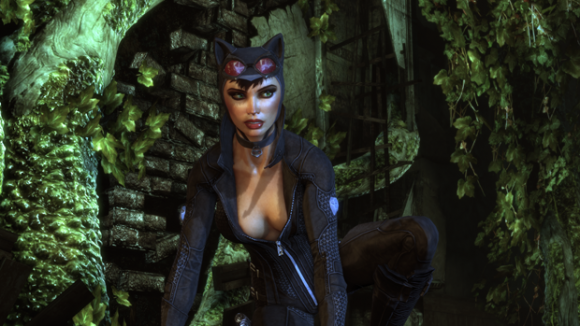 *BONUS from the original Arkham Asylum, here’s a bit of Scarecrow’s Nightmare. If you thought these graphics were fabulous, just you wait!