With all its gaming prowess, you could quite forget that the NVIDIA SHIELD Tablet has a second personality. Taking the clever Tegra-accelerated stylus technology of NVIDIA’s Note 7, and supercharging it with more sensitivity, less latency, and custom-created apps to show it off at its best, the DirectStylus 2 system promises the best of a digital pen with neither cost nor complexity in the way of compromises. We thought it was worthy of some time by itself in the spotlight.

The stylus world is a complicated one, and it’s worth revisiting the technologies used. At the cheapest end of the scale – and rarely seen these days – are resistive touchscreens which effectively use a dumb “toothpick” pen to mimic a thinner fingertip. Happily they’ve almost died out.

At the expensive end there are so-called active digitizers, made by companies by Wacom and N-Trig. Found in devices like Samsung’s Galaxy Note 3 and Microsoft’s Surface Pro 3, they use pens which communicate wirelessly with another layer behind the display. The upshot is accuracy and pressure sensitivity, but the downside can be added thickness and expense. 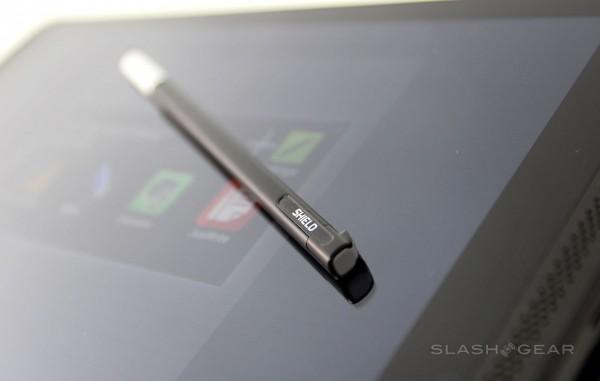 In-between there are some more unusual options, which generally build on capacitive touchscreens as have become common on smartphones and tablets in recent years. The most basic is a rubbery pseudo-finger, effectively a dumb stick with a soft blob on the end which replicates a fingertip touching the display; more complicated is something like Adobe’s Ink, which communicates its position via Bluetooth though demands compatible apps to deliver things like pressure sensitivity.

NVIDIA’s DirectStylus 2 is arguably a similar compromise, but it’s a clever one. The pen itself is regular plastic with an angled rubber tip, and the magic is all in the software and algorithms. Running the touch processing through the Tegra K1 means it’s able to differentiate in real-time between the nib, your fingers, and your palm resting on the display. DirectStylus 2 can even feign pressure sensitivity, by measuring the contact point as the tip deforms against the screen. 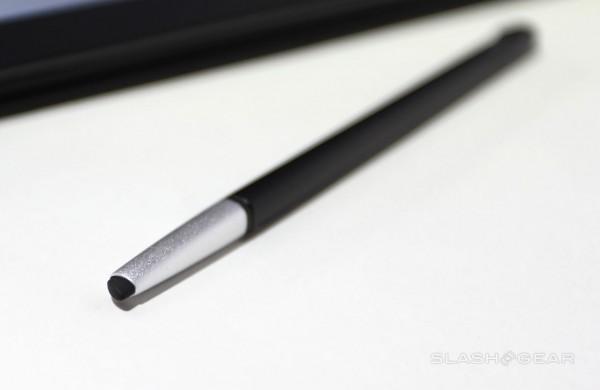 All that was possible in the first iteration of DirectStylus, but it’s been much improved for the SHIELD Tablet. Most notable is the reduction in latency, which NVIDIA says has been halved from first- to second-generation. It certainly feels more responsive, the digital ink flowing in a smoother, more precise way from the nib, and there’s also a greater degree of pressure sensitivity.

Dabbler supports three types of art: regular drawings, virtual watercolors, and virtual oil paintings. Each gets a set of different brushes, pens, pencils, and tools, in addition to various paper textures ranging from smooth through heavily dimpled or grained. A menu bar across the top handles file management, art type, and other settings, while a pop-up menu along the bottom controls color selection, tool, texture, and importing a photo or saved image from which to trace.

So far, so regular art software. What sets Dabbler aside is its combination of accuracy with the stylus, and exactly what NVIDIA can do with all that 3D graphics acceleration. 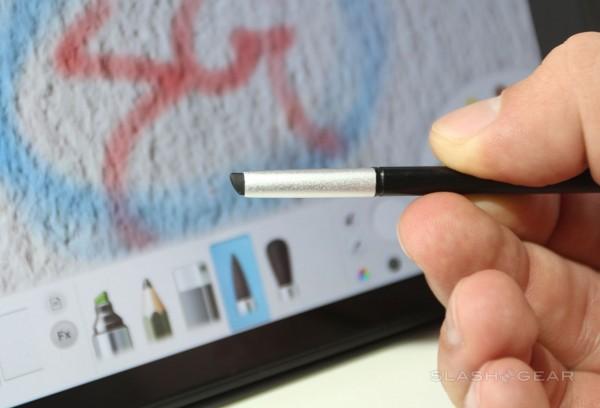 The first surprise is the paper texture. There are various different degrees of finish, and what’s impressive is to what degree they make a difference to the final effect of the pencil, paint, or ink you’re sketching out. Even the degree of absorption is modeled: as you wield a virtual watercolor brush, you can see the paint spread out, and the water gradually soak through and evaporate. 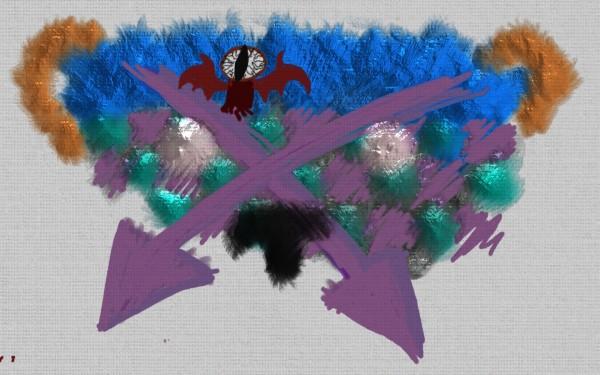 Even the amount of water loaded on the brush can be adjusted, or you can splash water alone on the screen. The effect of gravity can be toggled on and off – it recognizes the orientation of the SHIELD Tablet so the paint always drips down – and there’s a dryer key which instantly dries out the page and stops all movement. 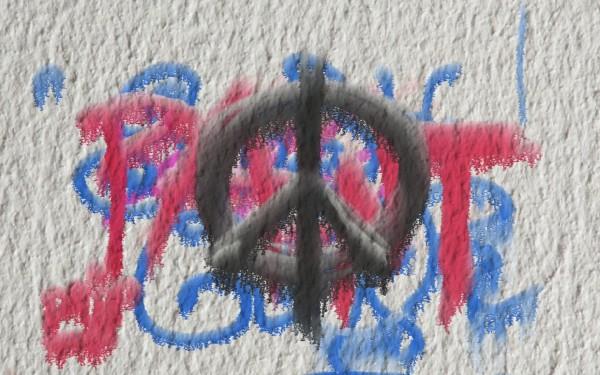 Different colors and brush strokes interact with each other, just as they would on real paper. Use a pen on top of a watercolor line, and it’ll bleed just as you’d expect. Hues and tones intermingle; a scalpel tool in the oil painting toolbox means you can gouge and scrape lines in the paint. NVIDIA even allows you to adjust the angle of the light hitting the canvas, to bring out different highlights of the ridges you’ve created; it should look gimmicky, but it really doesn’t.

That’s in no small part because NVIDIA’s pressure sensitivity system works so well. Lines don’t just get thicker when you press harder, they act as a stick of charcoal or a paint-loaded brush might. DirectStylus 2 is precise enough to recognize pen direction, even when you’re just twirling the nib around in the same point on the screen. 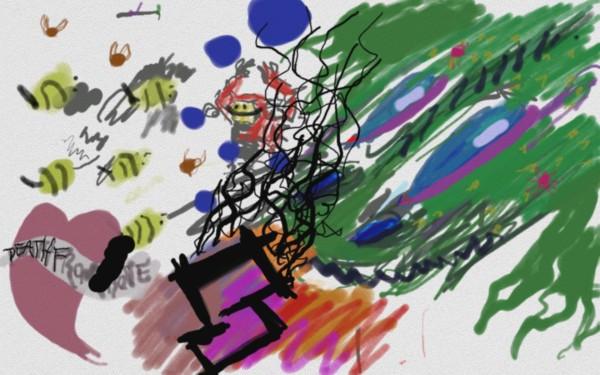 A stylus isn’t only for art, however: it needs to deliver on note-taking, too. Whip out the pen from its silo in the SHIELD Tablet and the DirectStylus Launcher pops up, offering user-customizable shortcuts to the primary pen-enabled apps.

Out of the box, that’s Dabbler, Write, Evernote, and JusWrite. Write is the same basic notebook tool familiar from the original Tegra Note 7, with ruled pages that can be filled with various colors of pen. My criteria for success in note-taking is always how small my handwriting can be while still being recognizable: after all, there’s no point in replacing your paper notebook with a digital version if you can’t fit as much on the page. 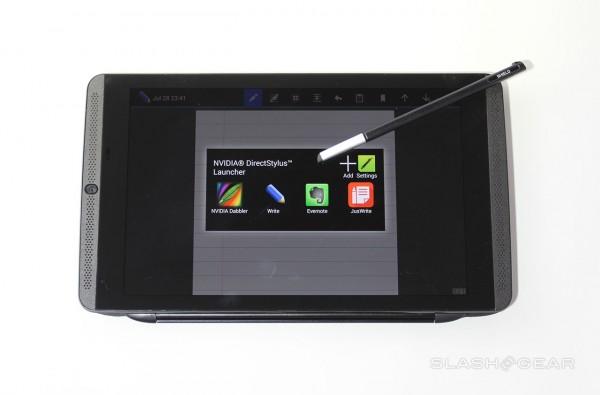 Here, the SHIELD Tablet does well, though it’s still not quite up to the degree of an active digitizer. The narrow tip of the stylus is recognized even when dealing with tight cursive, without introducing jumps and glitches; meanwhile, palm-rejection is solid, though I had a few issues when reaching the virtual margins.

Evernote, meanwhile, works just as you’re used to from other Android devices, only with the added bonus of being able to write directly into a handwritten note. Again, the limiting factor is some glitches at the edge of the display, though I found Evernote preferred thicker lines by default than Write which meant there was less overall room for text in-sight. 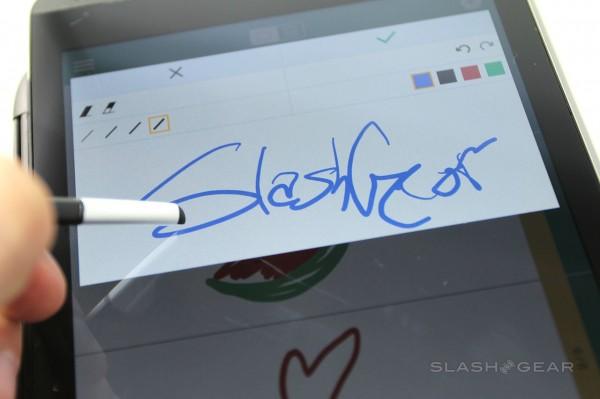 Evernote does have the advantage of cloud synchronization, of course, along with including handwritten notes in search results without having to first convert them to regular text.

Finally, there’s JusWrite, which tries to be a digital version of the traditional paper planner. It only works in portrait orientation, and is fairly rudimentary, though it may well prove useful to those transitioning from an old-school Filofax to a tablet for the first time.

Usually, when you’re entering text on the SHIELD Tablet, the regular Android keyboard pops up: then, you can either use your fingers or the stylus to peck out words. However, there’s also the option for handwriting input, accessed with a tap-and-hold on the space bar.

Then, the keys are replaced with a dynamically scrolling area in which you can write letters, numbers, and symbols. As you write, the blue raw text turns black as it’s recognized, and periodically the whole panel shifts off to the left to free up more space to write. 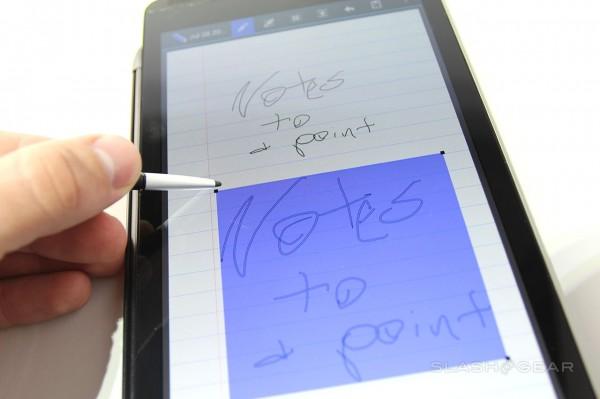 I’ve used a fair few handwriting systems, and NVIDIA’s falls somewhere in the middle. The recognition rate is on the good side of average, unsurprisingly preferring printed words rather than cursive, though having a decent stab at understanding my occasional chicken-scratch. Though there’s a scroll speed setting, even at “fast” I’d have preferred the text box to clear out more rapidly. As it was, I kept having to pause and wait for the tablet to catch up.

It’s not the only occasional glitch I spotted while using the SHIELD Tablet’s stylus. At times, after exiting a pen-centric app, it would remain in stylus-only mode and refuse to recognize my fingers. Toggling stylus-only mode manually fixed it, but it was annoying.

What NVIDIA has achieved with DirectStylus 2 is frankly astonishing. Given the sticker price of the SHIELD Tablet, and the absence of an active digitizer, you’d be forgiven for assuming the bundled pen would inevitably disappoint. 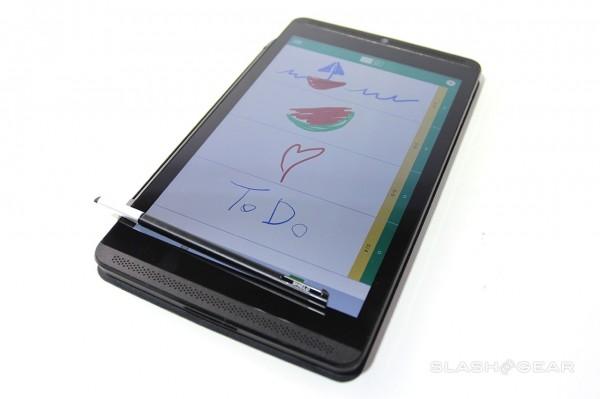 That it doesn’t, and that in fact NVIDIA Dabbler is one of the better art apps we’ve seen for a tablet in recent years, is a testament to what you can do with a meaty processor and some smart touchscreen tech. Handwriting recognition isn’t quite so great, but it’s still more than usable, even if most people are now probably sufficiently comfortable with a regular on-screen QWERTY for their text-entry needs.

NVIDIA may be positioning the SHIELD Tablet as for gaming first, but its art abilities are not to be underestimated. Given the price and the specifications, it’s hard to find a downside in what’s an impressively well-rounded slate even if you’re not an avid gamer.

Don’t forget to read our full NVIDIA SHIELD Tablet review for all the details on the new Android gaming monster! 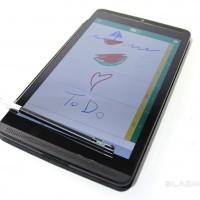 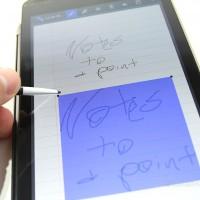 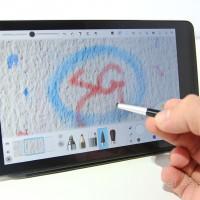 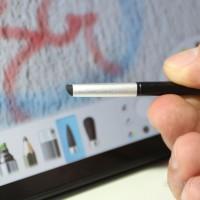 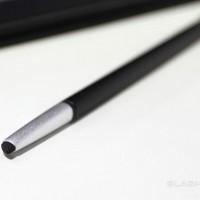 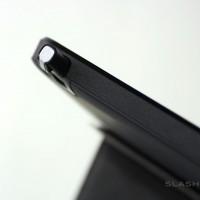 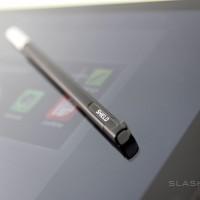 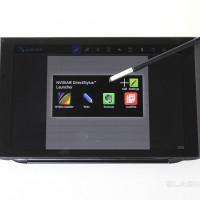 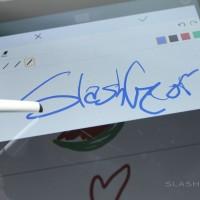 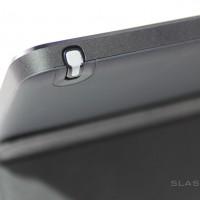 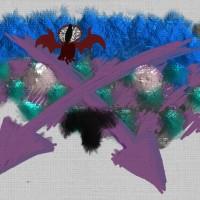 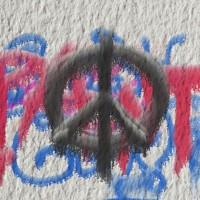 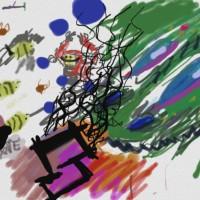