It’s time for an update for all you gamers out there playing any of the newest round of ground-breaking NVIDIA-powered PC games, this GeForce 290.36 Beta Driver release correcting bugs and adding features you might never have known were there in the first place! NVIDIA lets us know that players of Batman: Arkham City, Elder Scrolls V: Skyrim, and Call of Duty: Modern Warfare 3, should certainly update to this newest driver set, and Battlefield 3 as well as Crysis 2 will receive fixes for tiny broken bits like the “random appearance of triangular artifacts” in the former game. Grab it now!

NVIDIA notes that this driver download enables NVIDIA Surround on the newest X79 SLI-certified motherboards and those of you with BenQ XL2420T and BenQ XL2420TX monitors can now get 3D Vision DisplayPort 1.1 connections natively. Ambient Occlusion is included for Skyrim and MW3, this feature activated in your control panel once you’ve got it all downloaded and loaded. Ambient Occlusion essentially means you’ll have the best in-game shadow effects in the business. To get to this feature in your control panel, hit 3D Settings, Manage 3D settings, and find Ambient Occlusion (should be at the top) and set it to either Performance or Quality, then hit the Apply button. 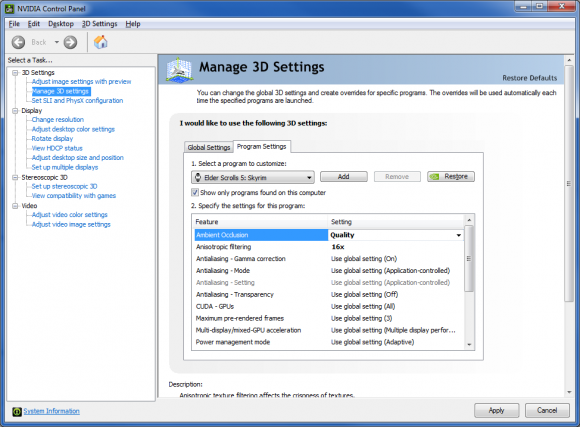 UPDATE: head to this NVIDIA slider page to see how the shadows will improve your experience in all places!

Of course this only works after you’ve got the new driver downloaded and attached, which you’ll have to head to the Beta and Legacy Drivers page on NVIDIA to get. Once you’ve got it ready to go, have a peek at the full release notes here on what you’ve done to your computer. Only great things, only big hits! You’re gonna love it!

Don’t forget to check out our full review of Batman while you’re down here, it’s Battastic!