Tegra 2 isn’t new, but NVIDIA is hoping that 2011 will be the year that the dual-core mobile processor comes into its own. Last we heard of “superphones” it was Google trying to brand their Nexus One as such; now NVIDIA is seizing on the title to describe devices packing multi-core CPUs, speedy GPUs and frugal power requirements, the first device being LG’s Optimus 2X. To help users pair up superphones with apps worthy of Tegra 2, NVIDIA is also launching its own software tool.

The NVIDIA Tegra Zone app isn’t another download store; instead it works alongside the official Android Market, flagging up Tegra-optimized games for their superphone or tablet. NVIDIA is promising professional game reviews, high-res screenshots, HD video trailers, gameplay videos and behind-the-scenes featurettes, while purchases and downloads will be handled by Google’s app store.

Launch titles will include Dungeon Defender – which also happens to be the first game available for Android built on Unreal Engine 3 – Monster Madness, Fruit Ninja, Backbreaker THD, and Galaxy on Fire. However, in the future there’ll be games that can be played between Tegra 2 devices and desktop PCs, NVIDIA tells us. 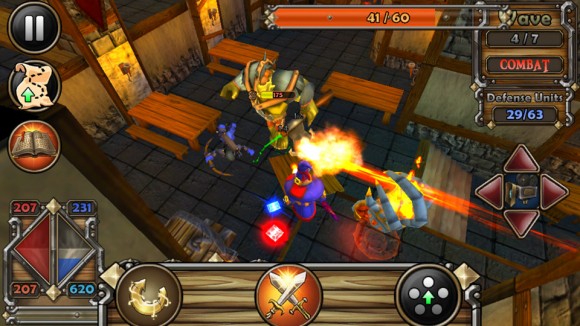 Their seamless multitasking and support for hardware-accelerated Adobe® Flash® Player begin the process of merging the smartphone, with a game console and multimedia device. The result is a mobile web experience capable of console-quality, multi-player, cross-platform gaming, as well as enormous flexibility in terms of carrying out multiple tasks at once.

One of the first devices in this next wave of super phones is the new LG Optimus 2X powered by Tegra 2.

Tegra 2 enables new mobile media and gaming capabilities:
o For the first time, consumers will be able to game with multiple players
using different types of devices. For example, a Tegra 2-powered super
phone or tablet can be used to play with players on a desktop PC.
o NVIDIA demonstrated a prototype of Skype HD video calling on an
Android tablet at its CES 2011 press conference. NVIDIA developed a reference implementation of HD video conferencing on Tegra 2-based tablets using SkypeKit. SkypeKit is a collection of software and APIs that allows virtually any Internet connected device to offer Skype voice and video calls.
o NVIDIA introduced the Tegra Zone app. It allows consumers to find Tegra-optimized games for their super phone or tablet, along with professional game reviews, high-res screenshots, HD video trailers, gameplay videos, and behind-the-scenes featurettes. Consumers can complete their purchase of Tegra Zone games on the Android Market.

Details can’t yet be provided for other super phones that will be announced shortly at CES.

• “We’ve entered the super phone era. People are looking at their mobile device as a computer first and a phone second. Tegra’s brought the super phone to another level with new mobile experiences that haven’t been possible before.” – Michael Rayfield, General Manager of the Mobile business at NVIDIA

• “We are very excited about the trusted partnership with NVIDIA, and also very proud of the result of the collaboration: the LG Optimus 2X. This Tegra 2- powered dual-core super phone will set the new standard in the smartphone industry, delivering users a new-dimensional smartphone experience. LG also looks forward to future partnerships with NVIDIA that will further promote our shared passion for innovation.”
– Yong Seok Jang, Vice President of Business Strategy team, LG Electronics Mobile Communications Company

• ”As a close and longtime partner of NVIDIA, we are excited to see how rapidly the performance of mobile phones is advancing. With Tegra 2, NVIDIA continues to push the boundaries and delivers a chip that offers amazing content experiences for next generation devices.”
– Danny Winokur, Vice President, Flash Runtime at Adobe

• “We are excited that NVIDIA has leveraged SkypeKit to build a reference implementation of HD video calling on Android Tablets. In the near future, consumers will be able to make video calls from their Tegra-powered Tablets to anyone else using Skype, whether it’s on a PC, Mac, TVs, or phones.”
– Manrique Brenes, Director of Business Development at Skype

• “It’s time for the next gaming revolution. Tegra 2 holds the power of a console in the palm of your hands. Games like Dungeon Defender are in true HD, and more realistic, interactive and challenging on devices with Tegra 2.” – Jeremy Stieglitz, Development Director at Trendy Entertainment