NVIDIA Kepler GPU power gets virtual on the iPad

This week at the GPU Technology Conference (GTC) NVIDIA CEO Jen-Hsun Huang has demonstrated the way in which NVIDIA is taking graphics processing to the cloud, starting with Kepler running massive amounts of GPU power on an iPad – virtually! In his first keynote speech of the event, Huang noted that he’d be showing off three new technologies – the first being the most powerful GPU NVIDIA’s ever built, the second being a GPU “so small it can fit into an iPad”, third he’d reveal a GPU “we can all share.” This third reveal works with Kepler, NVIDIA’s GPU technology which today Huang revealed would no longer need to connect directly to a display, instead rendering and streaming instantaneously “right out of chip to a remote location.”

This new technology deployed on Kepler, noted Huang, was super energy efficient, this allowing for deployment on a massive scale. This architecture allows for every command buffer to be virtualized, NVIDIA now able to have one GPU shared with “countless users” as each virtual machine can be discerned from the next, each of them sending graphics commands individually. Machines can now have streams sent to them completely virtually with Kepler architecture, this allowing for a BYOD environment. 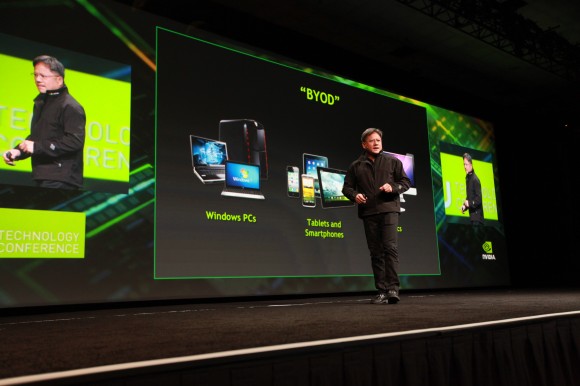 Bring Your Own Device is the new key here with NVIDIA, with one limitation currently being that in the past we’ve needed to integrate into one network which has tended thus far to be working with Windows. NVIDIA’s solution to this limitation problem has your GPU virtualized entirely, adding Kepler and newly developed GPU-aware hypervisor software (aka a virtual machine manager), with each machine then having a GPU to itself. NVIDIA is teaming up with Citrix to make this a reality. 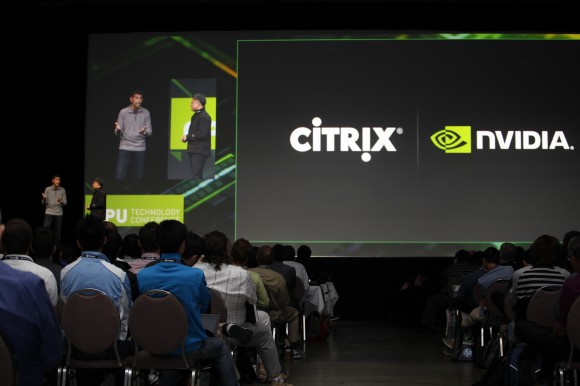 Huang invited Sumit Dhawan, Group VP & General Manager at Citrix Systems to the stage to discuss the future of virtualization. Together Dhawan and Huang headed to stage left where an iPad was connected with Citrix Receiver, an app which here allows a massive 1,000 CUDA cores to be shown on the tablet at once – all of them virtualized. 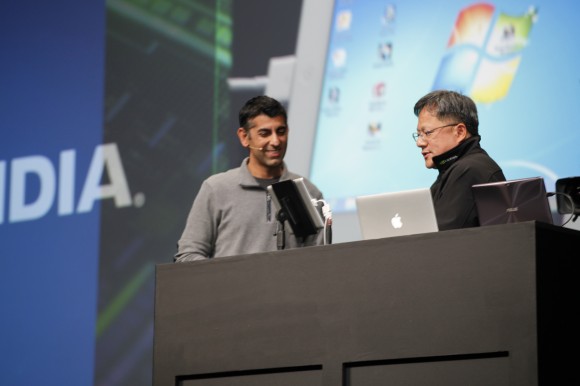 The cores aren’t actually running on the iPad, instead running on a remote server powered by NVIDIA VGX technology. Stay tuned for the rest of the big bang NVIDIA is releasing today at GTC and check out the timeline below to see what we’ve seen thus far – NVIDIA GPUs blowing up all week!

Thanks to NVIDIA for the awesome photographs snapped right up front at the GPU conference live! You can check out their in-house live stream at NVIDIA Blogs now!