There’s a so-called “tech preview” of the system known as Citrix out there this week, bringing with it access to none other than NVIDIA’s GRID for the masses. What users will be able to do with the setup released this week is access graphics power from remote locations using NVIDIA GRID vGPU, enabled here with Citrix. With this virtual GPU system, businesses are able to give access to full desktop graphics power completely virtually, on the fly.

With NVIDIA GRID vGPU, users are able to work with a virtual system that provides “the same 100 percent graphics API compatibility” as as user with a dedicated GPU at their desk would have. According to NVIDIA’s Justin Boitano, this system works with everything from Windows Aero to Autodesk AutoCAD to none other than Adobe Photoshop. This particular setup with Citrix requires just a few steps to get set up.

First, the prospective user will need an NVIDIA GRID K1 or K2 GPU system set up in full. This includes one of a wide variety of setups as listed in NVIDIA’s own GRID Certified Servers list which, at the moment, is completely comprehensive. Once this system is set up, the newest tech preview from Citrix must be installed and opened. Finally, NVIDIA’s own vGPU Manager and Drivers must be loaded up. 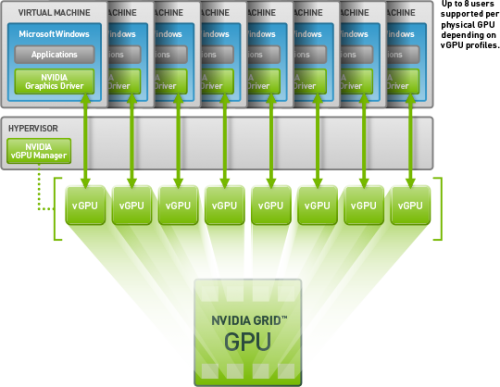 From here, a fixed amount of graphics memory will be allocated to each virtual machine in your system. This graphics memory comes from your NVIDIA vGPU Manager-connected GPU, and all commands will run at that point straight through the system natively. In other words, commands pass unaltered through the NVIDIA graphics driver on a virtual machine to a virtual I/O channel to the GPU. This GPU will then time-slide all graphics rendering done here to all users sharing the GPU on your system. Simple, yes?