This week NVIDIA decided to reveal their next big graphics card at a press event that wasn’t explicitly theirs. At the Epic Games event, with Tim Sweeney next to him, NVIDIA CEO Jen-Hsun Huang revealed the NVIDIA GeForce GTX TITAN X was revealed for the first time. This card was revealed only with the promise of the whole audience that they’d come to GTC 2015. That’s NVIDIA’s own graphics-centric conference that takes place later this month – we’ll be there too, of course.

Several points were covered by Sweeney before he went on to speak about the graphics power needed to move forward with gaming, developing for high-end gaming – and for virtual reality. First, he reminded the audience that this week Unreal Engine 4 was made free.

On Virtual Reality hardware, Sweeney suggested that “the current generation of hardware is Palm Pilots compared to the iPads we’ll have in a few years.”

According to Sweeney, on the power of 3D scanning and rendering of virtual realities, “it took us several years to really recognize the potential for this, and several elements helped us [to see that potential.]” One of these things was architectural demos like the one we saw several weeks ago – a tour of a Parisian apartment.

Another piece of the equation in Epic realizing the potential for VR was in storytelling. “There’s a dawning realization that his is the future of storytelling,” said Sweeney on the “The Hobbit” demo they’d be showing the rest of the week in VR at GDC 2015.

“We’re seeing widespread interest through all the movie theaters,” said Sweeney on the use of Virtual Reality in entertainment – especially in films and the promotion of films. With good reason, he suggested, “this is the convergence of all these different types of media.”

To make virtual reality a reality for the public, “we need a series of leaps and bounds in rendering technology,” said Sweeney. “Does anyone have any solutions to [speed up graphics technology]?”

There was a knocking at the back of the keynote area and – surprise! It was Jen-Hsun Huang. “If I announce this graphics card here, GTC 2015 will be a bust. So you need to promise you’ll come to GTC 2015. 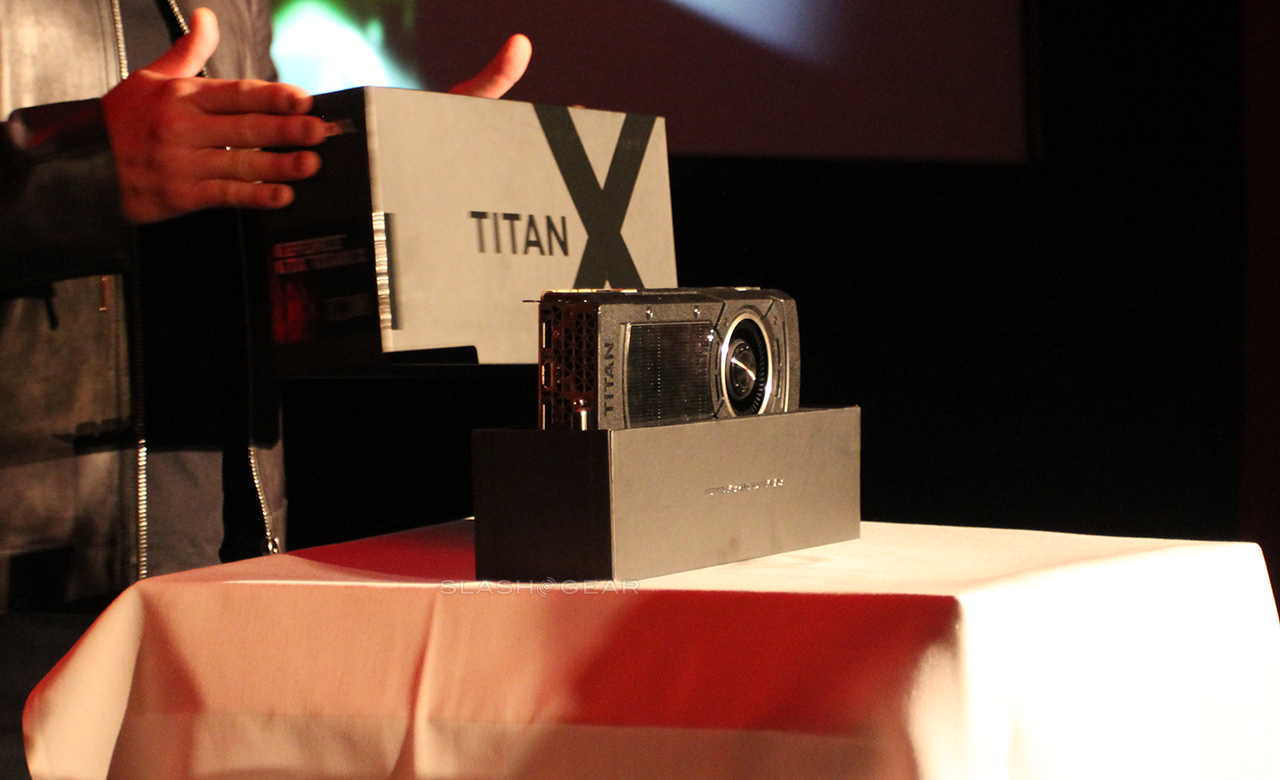 Not just one whole heck of a lot of details will be released on this graphics card until GTC 2015, but for now we know this:
This card will bring a whopping 12GB Frame Buffer. That’s massive.
This card will be delivered with 8 Billion Transistors. That’s gigantic.

We also know that Tim Sweeney has the first one. Huang handed Sweeney the first box with the first card this afternoon after signing it.

Stick with SlashGear for the rest of the week at GDC 2015 to hear more about Epic Games, any oddities NVIDIA might still drop, and hands-on action with all manner of gaming software and hardware!