With the NVIDIA GeForce GTX 750 and 750 Ti comes the company’s first implementation of their 1st generation Maxwell GPU architecture. Maxwell brings what NVIDIA suggests is the most efficient GPU on the market – efficiency, that is, doing more with less. NVIDIA says they’ve increased the performance of Maxwell up per watt up 2x over Kepler.

Both Maxwell and Kepler work with the same 28-nm process. Kepler works with 192 cores across a single piece of SM contained control logic while Maxwell rolls with four blocks of SM control logic with 32 cores each. Each of Maxwell’s blocks are controlled by their own bit of SM.

This card is made to replace the GTX 650 Ti in two iterations – 750 and 750 Ti, and NVIDIA suggests it out-performs the GTX 550 Ti by 2x. Power performance between GTX 550 Ti (with Fermi) and GTX 750 Ti is 4x – this graphics card requires so little power it needs no power connector. NVIDIA GeForce GTX 750 Ti requires only 60W TDP*.

*TDP (Thermal Design Point) is the max power this computer’s cooling system is required to dissipate. This is in “normal” circumstances, running applications – more power can be drawn in extreme circumstances, such as with a power virus (bad). 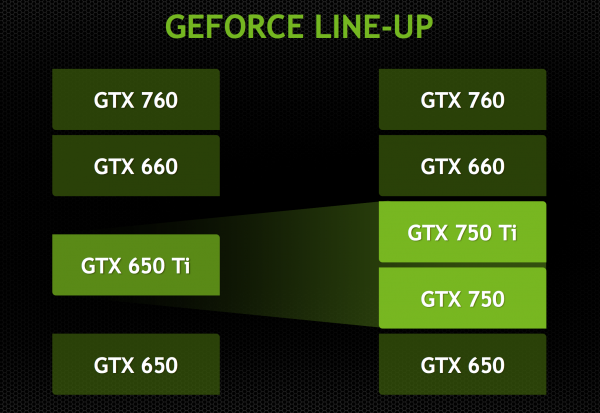 Make no mistake, though, if you’re rolling with a highest-end GPU from the past few years, you’re not going to be upgrading to the GTX 750 Ti. This card, instead, is one you’re going to choose if you’re going to make a new mini-PC, machines with 300W PSUs, or upgrading from a GTX 550.

This card brings on a variety of current-generation NVIDIA-specific abilities, of course, like ShadowPlay – built-in to NVIDIA GeForce Experience for game screen recording and streaming. ShadowPlay works particularly well here thanks to NVIDIA’s implementation of an improved NVENC encoder.

Also in play here is NVIDIA SHIELD streaming abilities. Just like we saw when we first published our NVIDIA SHIELD Review, this GPU allows you to stream games on your own wireless network to SHIELD or to SHIELD and back out through HDMI to your big-screen TV.

The test here suggests that our Fire Strike 1.1 score of 3673 is “better than 32% of all results” while a “High End Gaming PC”* result rolls in at 9131 with the same test. This “High End Gaming PC” according to 3DMark is a machine with an Intel Core i7-4770K, ASUSTeK Z87-PRO, and NVIDIA GeForce GTX Titan.

We’re play-testing Titanfall for a short bit this afternoon from about 4PM until 4:45 or so, Central Time, with the NVIDIA GeForce GTX 750 Ti and Titanfall Beta. Have a peek!

UPDATE: For as long as we can host it, here’s the Twitch recorded session as it was pushed. Have a peek at how well this machine rolls with NVIDIA ShadowPlay to Twitch here and let us know how you find it:

The NVIDIA GeForce 750 Ti is a rather fine bit of equipment if you’re looking to create a baseline for gaming in our modern environment. The 750 and 750 Ti also provide a good starting place for Maxwell, a bit of architecture that’ll redefine proficiency for graphics cards throughout the GeForce family.

NVIDIA GeForce GTX 750 and 750 Ti cards are being manufactured by ASUS, EVGA, Gainward, Galaxy, Gigabyte, MSI, Palit, and Zotac, with a variety of features depending on the brand. This card is being released for a cool $149 MSRP – we’ll see how the rest of the manufacturers configurations stack up soon!