Nokia’s struggles in smartphones are well documented, and I’m not going to rehash them here. However, if you live in the U.S. it is easy to overlook just how huge and successful Nokia is. Even in smartphones, Nokia is the global volume leader, and when it comes to featurephones, Nokia literally sells about six dozen of them in the time it takes to read this sentence – every minute of every day. Most of those are basic voice phones sold in emerging markets like India and Africa, but Nokia is also the market leader in multimedia featurephones. Nokia’s latest entry in that category is the X3 Touch and Type (not to be confused with the X3, launched last year), which is a Series 40 phone with a touchscreen on top and a physical numeric keypad below. I find the X3 Touch and Type deeply disturbing.

First, a bit of background: Whenever I’ve gone to Nokia’s headquarters in Espoo, Finland (which looks like what would happen if you crossed an IKEA with an Apple store), I’ve been impressed by how humble, competitive, and damned smart the people are. Finland has some of the highest labor rates in the world, yet Nokia somehow manages to effectively compete with Chinese vendors on cost. Nokia is not just the largest handset vendor in the world, in most of the world the company retains a premium brand image – and in some areas Nokia has staggeringly high market share.

Nokia got this way by riding the GSM wave in Europe with durable, stylish phones that had wonderfully simple user interfaces. Nokia then built a supply chain and manufacturing capabilities second to none, and it pushed hard into emerging markets such as India, China, and Africa, where it maintains distribution advantages that rivals still have a tough time matching. Ever-conscious of creating economies of scale, Nokia split its line into three basic platforms: S30 for basic voice, S40 for mid-tier feature phones, and S60 for smartphones. However, with the strategy set, Nokia seemingly put its designers on auto-pilot.

Over the past ten years, Nokia has stood by while an entire generation of new form factors has passed it by; Nokia missed the clamshell, the thin trend, QWERTY messaging phones, and touchscreens. In each instance, Nokia half-heartedly introduced its own take on these designs a few years late, just in time to miss what’s next. The touchscreen feature phone has been around so long that, after dozens of iterations, LG actually has a uniform touchscreen UI, and Samsung decided to turn its RTOS (Real Time OS) into a smartphone platform. In contrast, the interface on the new X3 is just touch-enabled S40 without the benefit of a virtual or physical QWERTY keyboard. Nokia calls this “Touch & Type,” but that is misleading, as no typing is involved.

Nokia’s research indicates that consumers want to use their phones with just a single hand. That undoubtedly is what Nokia’s research subjects say when they are asked, but it does not necessarily translate to sales purchase behavior; touchscreen and QWERTY phones are strong sellers in nearly every market where they are introduced. Besides, I’ve been an analyst long enough to have seen this play out before; single-handed use was also Nokia’s rationale for disregarding clamshells back in 2002. Nokia has not learned from its mistakes, so it is doomed to repeat them. 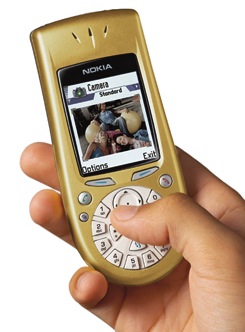 The X3’s physical keyboard is another case of Nokia moving around buttons and using oddly shaped keys and then claiming that consumers will not notice. (The worst example of this was the 3650, which had a circular key layout. At the time, Nokia’s product manager explained that user testing did not indicate that this was a problem. Riiiiight.) Nokia did make the right decision to use hard SEND and END keys on the X3 Touch and Type, and including dedicated messaging and music buttons is also welcome. The X3 Touch and Type’s saving grace is its style and cost structure; most touchscreen phones are priced above its EUR 125 price point, and it is commendably thin with a metal (as opposed to plastic) back plate. The X3 Touch and Type further differentiates itself with a 5MP camera. In price-sensitive markets where Nokia’s brand alone is worth a premium and Nokia has significant distribution advantages, the phone should sell well despite its flaws.

However, it is disconcerting to see that Nokia’s troubles are not relegated only to smartphones, where the company acknowledges that it fell behind. After I had submitted this column, Nokia announced the 5250 – a full touchscreen Symbian ^1 smartphone due out later this year for just EUR 115 – less than the X3 Touch and Type. The user experience on resistive Symbian touchscreens is lousy, but the price is right, and it will put serious pressure on Samsung’s Bada, which thus far has only been used with premium hardware.

Nokia’s annual launch/developer event, Nokia World, is coming up next month, and I expect we’ll see Nokia announcing its first MeeGo device there, aimed at high end smartphones from Apple and Android licensees. It is not clear whether Nokia’s high/low approach in smartphones will be enough, but Nokia is behind the competition in mid-tier feature phones, too, and the X3 Touch and Type is not enough to catch up.