Nokia‘s next MeeGo update for the N9 will enable video calling using the front-facing camera, according to details of the incoming PR1.2 firmware, along with app folders on the homescreen and other tweaks. The changes, previewed in screenshots from the maemo forums, also include copy and paste support in the N9’s browser, using a similar drag’n’tap system to what’s seen in Android and iOS.

In fact, Nokia’s app folders – which you can see previewed in the screenshot below – are likely to prompt some heated comparisons with Apple’s platform. The MeeGo Harmattan team’s “inspiration” is clear, though we can’t argue with the functionality nor deny that it’s something N9 owners have been asking for. 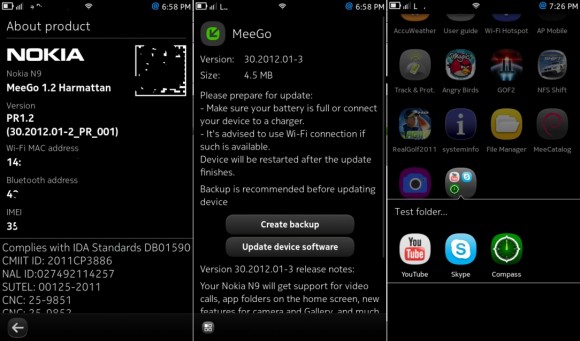 Other tweaks include new features in the Camera and Gallery apps, though details themselves on the changes aren’t listed. No word on when the PR1.2 firmware will be released, though the version number seems to suggest a January 30 2012 build which could indicate sometime close to the end of this month.

More details on the Nokia N9 in our full review.