Nokia today announced the N86 8MP, which as the name suggests is an 8-megapixel cameraphone.  It couples Carl Zeiss optics with triband 3G HSDPA/HSUPA, a 2.6-inch OLED display running at 240 x 320 QVGA resolution, and 8GB of onboard memory augmented with microSD cards.

The camera has a mechanical shutter that operates at 1/1000 sec, and a 3rd-generation dual-LED flash that, according to Nokia, is as effective as a Xenon unit with the benefit of operating as a video light.  The N86 8MP can also record VGA 30fps video and has digital image stabilization. 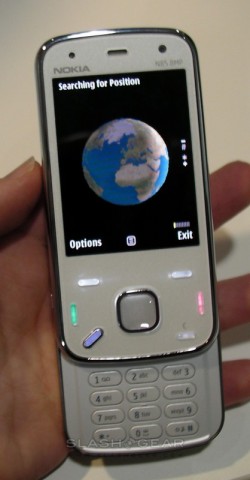 As a full Nseries handset, the Nokia N86 8MP runs S60 3rd Edition, FP2, and has WiFi b/g, A-GPS, a digital compass and accelerometer.  The onboard media player can output either via the standard 3.5mm headphone jack or the integrated stereo speakers, with a pop-out kick-stand for tabletop use; there’s also an FM transmitter, and Nokia are claiming up to 25hrs music playback from the 1,200mAh battery.  Connectivity includes TV-out (supporting both PAL and NTSC) and a microUSB connector, plus Bluetooth 2.0 with A2DP wireless stereo support.

Nokia also preload the N86 8MP with their Ovi online services suite, including Nokia Maps 3.0 with voice-guided driving directions, a pedestrian mode and 3D landmarks.  The GPS can also be used for geotagging.

While the casing might resemble earlier Nseries devices in photos, Nokia have used more premium materials for the N86 8MP.  That includes metal detailing, a full hardened-glass face which is scratch resistant.  The battery is good for 7hrs of gaming or video playback, or up to 3.9hrs 3G talktime (6.3hrs GSM) or up to 11.5hrs 3G standby (13hrs GSM).