Nokia’s N8 remains one of the more interesting smartphones of 2010, and we leapt at a chance to have an extended play with the Symbian^3 handset as it made its debut in London this morning. Toting a 3.5-inch capacitive touchscreen with multitouch support, 12-megapixel camera with Carl Zeiss optics, 720p HD video recording and a Xenon flash, and a slick anodised aluminium chassis, our biggest question was whether Nokia’s OS fettling had been enough to make the N8 competitive with what’s an increasingly competitive smartphone market. Check out our impressions – and some hands-on video – after the cut.

It’s not, of course, our first hands-on with the N8, but it was certainly our first proper opportunity to get to grips with the new Symbian^3 OS the smartphone runs. There’s obviously been some consternation about just how different this platform is from its S60 5th Edition predecessor, and while the changes may be relatively subtle – we’ll have to wait for Symbian^4 for the real fireworks – they’ve also very sensibly been targeted at the key pain points of earlier devices.

So, rather than the bizarre double-tap selection metaphor in menus, a hang-over from S60 5th Edition attempting to emulate a D-pad/select button paradigm, you tap just once. On its own it’s enough to make the whole phone navigation system feel slicker; meanwhile Symbian^3 is faster anyway, and the N8 feels – if not the fastest device out there – then at least decently peppy in general use. It’s worth remembering that this is still pre-production hardware and non-final software (and using a clogged WiFi network hence sluggish page loading in the video below) and things will likely improve again before the N8 reaches retail shelves.

Long-pressing the home button pulls up an app switcher which can be used to flip between running software – the N8 supports true multitasking – and each app has a close button so that you can shut it down direct. The homescreen has three panes, each of which with six slots for widgets; tapping and holding the screen allows you to move widgets around, while tapping an empty slot calls up the widget catalog (which has a link to the Ovi store for downloading new widgets). Nokia have reworked their email app for the N8 – it supports multiple inboxes, though not one combined inbox, HTML messages, and each account can have its own homescreen widget – and you can easily filter by sender and date.

There’s also Ovi Maps with free turn-by-turn navigation, of course, together with WebTV support. Nokia are offering commercial TV stations and independent content providers a set of easy templates which they can use to develop media for the N8 to view, using their existing backend. In the settings, meanwhile, you can assign custom voice commands to apps, together with toggle the N8’s motion-control features; the latter allows you to silence an incoming call or snooze an alarm simply by flipping the smartphone over.

Most impressive, however, is the N8’s 12-megapixel camera. Nokia told us their intention was to make the smartphone “good at everything it does” rather than follow a path to the cheapest possible components. With that in mind, the N8 has the largest camera sensor in a mobile phone, at 1.183-inches, which is in fact bigger than you’ll find in many point-and-shoot cameras. Macro performance is particularly good – the photo of lettuce in the gallery below was taken with an N8, untouched by photo editing software, and you can zoom in and make out individual droplets of water on the leaves – and the Xenon flash should easily out-perform the dual-LED examples we’re seeing (and generally being disappointed by) in other handsets.

As for video recording, the N8 can capture 720p HD footage and uses its dual microphones – one under the camera lens, the other on the front – to pick up both speech and ambient noise for more realistic recordings. Nokia have paired them with new audio DSP algorithms that are more efficient at cutting out wind noise together with slicing through overly-loud music and background sounds. Preloaded onto the N8 is a video editing tool which lets you piece together video clips and still photos with transitions, titles and special effects, trip footage down and produce a simple video; it’s impressively straightforward, and in a few minutes we’d put together a thirty second clip mixing up various content with some backing music too. There’s an HDMI port – and Nokia include the necessary adapter cable in the box – to output video to your HDTV, and if you’ve got prerecorded content with Dolby 5.1 surround sound it’ll play that, too. Unfortunately there’s no way to record surround sound on the N8 itself. The actual end-result on the big screen is mighty impressive, both from prerecorded content and what the phone itself can produce; this is one of those times when it’s actually worth plugging in your HDTV. 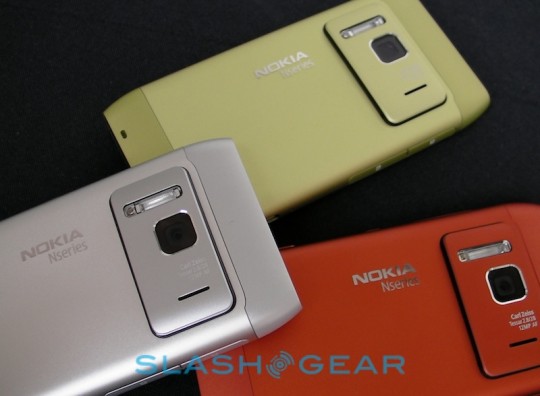 Physically, the N8 remains one of our favourite devices of the moment when it comes to hand-feel. Nicely weighted, the anodised aluminium casing – which is sufficiently scratch resistant to drop into pocket with your keys and not have to worry unduly – is creak free and brightly colored. Nokia has obviously spent a lot of time working out the details, too, such as the diamond-bevelled edges around the camera and volume controls. Under the hood is an ARM11 processor with a separate graphics chip; Nokia say their choice may be an older generation than some of the rivals on the market today, but Symbian^3’s relatively low power requirements means they can strike a good balance between performance and battery life.

Of course, the N8 isn’t perfect yet, though the issues we observed seem to be software related rather than anything more serious with the hardware. The touchscreen proved occasionally reluctant to let us select icons, and we saw a few app crashes or bemusing error messages. After we tried to load another app having been looking at some particularly heavy webpages the browser crashed, and while it supports Flash we found it wasn’t happy with every video we tried it with.

Nonetheless, we’re left quietly enthusiastic about the Nokia N8, and keen to spend more time getting to grips with its obvious strengths. Of all the features, it’s the camera we’re most excited by: rather than simply opt for the most megapixels they can squeeze in, it really feels like Nokia have thought about how people will be taking photos while mobile. One of their product developers told us the ambition was to produce stills that you wouldn’t obviously know were taken on a camera-phone, and in our limited experience with the N8 we think they’re certainly on their way to achieving that. Of course, since the N8 is most definitely a smartphone, you can easily geotag and send photos via email, SMS, Facebook and Twitter, something most point-and-shoots are incapable of doing.

Nokia are still talking about a Q3 2010 release for the N8, with a roughly €370 price tag (pre tax and subsidies) though we also heard whispers of $350 in the US (that’s unconfirmed right now). We’re hoping to have a review device as soon as the software is finalised. Symbian^3 may not be to everybody’s tastes, but we’ve a sneaking feeling that the Nokia N8’s strengths will help more than a few see past the OS.