With incremental updates for HERE maps on Nokia devices, the company takes away the pain of downloading the entire massive bulk of an offline map and makes it tiny. An update to Nokia’s offline maps system this week makes updating an offline map to your phone as simple as updating any normal app. Just as you’d update Angry Birds to get a few new levels, so too can you update your maps for offline use in just a tiny, incrementally updated file.

While past iterations of offline maps meant downloading the entire massive region you were going for, here Nokia sends updates to you that only reflect the changes made from the most recent update you’d collected. If only a new tiny neighborhood had some changes made to it in your entire city, you’ll no longer have to worry about a file just as massive – or more massive still – than the file you’ve got on your smartphone.

That’s not to say any offline map is massive – Nokia’s HERE maps system makes downloads relatively small. For example, while you may have a map of greater Denmark that’s 90MB large, an update to your area might just be 216MB. This update will make your updating of offline maps quicker and easy enough that you’ll want to do it on a regular basis. 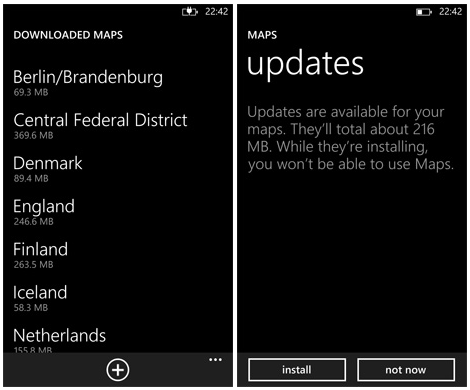 This update comes to the latest firmware available on Windows Phone 8 devices. This means that if you’re working with the Lumia devices with the Amber update, you’ll need that – every other device will simply need GDR2. To check to see incremental updates in the near future, you’ll have only to head to settings, applications, maps, then check for updates. The change-over doesn’t even require you to update your OS -it’s coming straight through maps alone.