Nokia has developed a highly-flexible fabric hinge with an integrated data connection, perfect for foldable smartphones and tablets. Detailed in a new patent application, the system could be smaller and more versatile than traditional fixed plastic or metal hinges, slimming down mobile gadgets to the point that they fit more comfortably inside a pocket.

The system Nokia describes uses multi-layered strips consisting of elastomers and composite fabrics, with various combinations of materials to choose between. The first layer could be a thermoplastic or thermoset material, or natural or synthetic rubber, Nokia suggests, while the second layer could be Kevlar or Cordura fabric. 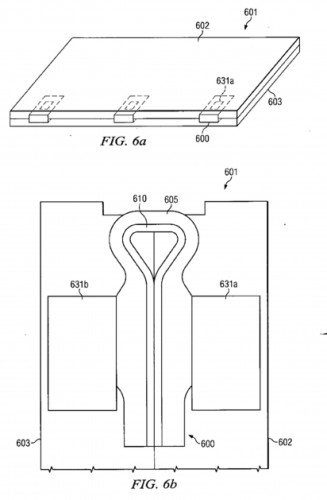 Either way, an electronic coupler could be integrated so as to connect the hardware in both portions. Nokia’s use of thermoset or thermoplastic materials could mean the device held its shape in an open or closed orientation merely by the tension of the hinge itself, rather than requiring bulky springs.

Nokia has experimented with bendable rubber and fabric components in mobile devices before. The 2650 clamshell phone of 2004 had a flexible inner panel, though the hinge itself was of a more traditional design; more recently, the Nokia Kinetic concept – shown in the video below – used a rubber casing along with a twisting display and other electronics to push the boundaries of UI and interface.

Of course, a patent application isn’t necessarily a sign that Nokia intends to use the fabric hinge technology in any commercial products, but we can’t help but hope that the company could have a clamshell Windows RT tablet with low-profile fabric hinges in the pipeline. Nokia execs have hinted at tablets in the past – including “different hybrids, different form factors” – though the company’s overall stance has been that it would hold back from the segment until it could do something different to the status-quo.