The Nokia E7 is finally shipping, the Symbian QWERTY business phone making its retail debut in several markets this week. Announced all the way back at Nokia World 2010 in September, until the first MeeGo devices arrive the E7 will be the de-facto flagship of Nokia’s range, with its 4-inch Clear Black display and 8-megapixel camera. One of a few rare review units dropped onto the SlashGear test bench last week; check out our first impressions after the cut

Update: Video added after the cut

We loved the E7’s hardware back at Nokia World, when the Finns only had prototypes to show us, and we love the quality of the production model too. Resembling a larger N8, the E7 is longer, broader, thicker and heavier than its touch-only counterpart, but overall we prefer the design; the N8’s awkward camera bump on the back has been dropped (the camera resolution and Xenon flash have also been dropped, too) and it’s a smoother device as a result.

Ports include microUSB, HDMI and a 3.5mm headphone jack on the top edge, with the SIM card loading in a carrier on the right edge. Physical controls continue Nokia’s well-machined bevelled style; the lock switch is the only mild frustration, audibly rattling a little if you shake the E7. Still, it’s the only negative (and a minor one at that) on a piece of high-quality design. 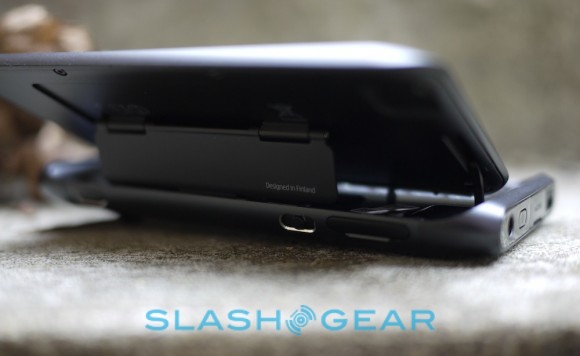 Pop open the screen and you’re presented with one of the best hardware keyboards on a device today, four rows of tactile, pleasingly-clicky buttons that are nicely backlit and responsive. The 4-inch screen itself is a marked improvement over the N8, a 640 x 360 AMOLED “Clear Black” panel with broad viewing angles and rich, inky blacks.

Of course, the thorn in the Nokia E7’s side will be Symbian for many would-be smartphone buyers, and while the platform has plenty of loyal fans – and, it has to be said, its own share of advantages – we can’t help but be disappointed that this isn’t the company’s first MeeGo handset. The UI refresh expected later in 2011 should go some way to tweak things aesthetically, but frankly the design and keyboard of the E7 are so strong that, if it were running Android or Windows Phone 7, it would easily slot in as a top-tier device.

It’s how all these elements stack up which we’ll be judging for the full SlashGear review of the E7, so if you’ve any curiosities of your own then let us know in the comments.

Espoo, Finland – The highly anticipated Nokia E7 will begin arriving in stores in select markets this week, with broader availability building up quickly in several markets.

With its tilting 4 inch ClearBlack display, full qwerty keyboard and a fast access to a wide variety of apps directly on the homescreen, the Nokia E7 is the key to having a successful day in or out of the office. Importantly, the device supports business applications from leading enterprise technology partners including Microsoft and IBM.

Additionally, a wide range of entertainment and social services available on the Nokia E7 make it the perfect off-duty companion, and the Ovi Store offers a wealth of apps such as Bloomberg, Angry Birds and Sports Tracker.
The new arrival offers drive or walk navigation in 80 countries. The latest commercial version of Ovi Maps, available immediately via Ovi Store or Ovi Suite, adds visibility to subways, trams and trains, real-time traffic, safety alerts, visibility to parking and petrol stations, speed limit warnings, and improved search and location sharing capabilities.