Nokia World is just around the corner, and the tech world is already gaping at some of the company’s more unusual devices.  SlashGear, though, have already been living with some of the Finnish company’s more mainstream handsets, those which will probably sell far more than flagships like the N900, in the shape of the Eseries E52 and E55.  Differentiated primarily by an unusual, half-QWERTY keyboard on the E55, they both promise lengthy battery life and smartphone strengths in a compact form-factor.  Check out our full review after the cut.

Specifications of the two are roughly identical, bar their keypads. Each has a 2.4-inch 240 x 320 QVGA display, microUSB connector and 3.5mm headset jack, while wireless connectivity includes HSDPA/HSUPA, WiFi b/g, quadband GSM/EDGE and Bluetooth 2.0+EDR with A2DP stereo support. There’s also A-GPS, a 3.2-megapixel camera on the back and a VGA camera up front for video calls, together with an FM radio with RDS and a huge 1,500mAh battery that occupies a large portion of each phone’s volume. Also tucked inside the battery compartment is a microSDHC slot which will take up to 16GB cards; both phones have around 60MB of integrated storage.

In terms of design, both the E52 and E55 are relatively sober. With the exception of the oddly-textured battery cover and the control-key surround, the phone is pretty much all plastic. That adds up to a low weight of around 98g, plus slim dimensions of 116.5 x 49 x 9.9mm, but it does leave both phones feeling a little cheap. Hardware controls include a separate power button on the top of the phone, which is reasonably tough to press (as you’d probably hope), then a camera shortcut/shutter key, volume and voice-control keys on the top left-hand side.

Up front, aside from the eye-catching ‘board of the E55, there’s the usual Eseries control key layout. That means a large, square D-pad with central select key, nicely sized for thumbing, then two softkeys, send/end buttons, and two rocker keys in-between that offer Home, calendar, mail and back/delete shortcuts. 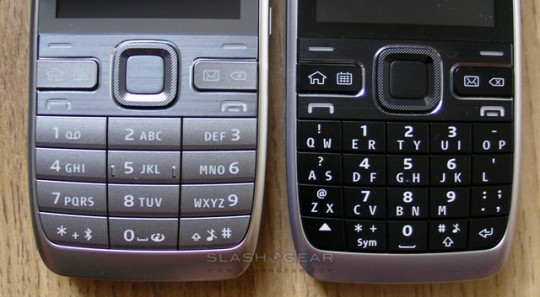 Since the E55 bears the more interesting keyboard of the two, that’s where we reached first. The concept is simple; the “half-QWERTY” ‘board pairs two letters to each key, and uses either predictive text or simply recognizing double-taps to manually pick between them. Being fans of full-QWERTY messaging phones, we were surprised to have so much trouble aclimatizing to the keys. Perhaps it’s the lack of differentiation between the buttons, the close spacing, or maybe just that our fingers are too trained to narrow numerical keypads, but we made constant mistakes. Changing between automatically-recognized words is also made tricky, as you have to reach up to the D-pad rather than bash at the + key in the lower-left corner as you would with a normal T9 phone.

In comparison we found it easier to type on the E52’s keys, simply because our fingers are already trained to use T9 and the buttons themselves are larger. It was also easier to type one-handed; with the E55, reaching across to the opposite row or squeezing in to the nearest row to the hand that’s holding the phone can be tricky, especially with the keys all the way down in the very bottom third of the candybar.

Still, with more use we imagine our speed on the E55 could have increased, and both phones have tactile, sturdy buttons with good feedback. That’s a relief, as Nokia are obviously intending them to be heavy on the messaging, preloading not only POP and IMAP clients but support for Exchange push email. We had no trouble using any of the three on the E52 and E55, which can be set to poll the email server at set intervals, when messages arrive (Exchange only) or when manually prompted. The 2.4-inch display is inescapably small, however, and with its QVGA resolution pales compared to other smartphones we’ve seen in recent months. S60 is obviously well placed to handle this, and menus and other dialogs are well-scaled, but it makes for frustration when trying to churn through an overloaded inbox. Very little of the body of an email shows on-screen without first scrolling down, and that can induce a pregnant pause while the phone either churns or grabs data from the server.

Web-browsing is also cramped, but it’s worth noting that both the E52 and E55 support accelerometer-led screen rotation, which does add a little more horizontal width (it also works to mute incoming calls or “sleep” alarms when you flip the phone over). The Webkit-based browser common to S60 devices has been updated to version 7.1, and is certainly faster than we’ve experienced on earlier handsets. Given the lack of a touchscreen and the small display, full webpages were less than pleasant to navigate (though, with patience, possible) but mobile-formatted sites whipped by. We also appreciated the fact that Nokia have used a transflective panel in both handsets, which means that outdoors and sunlight use is certainly possible. 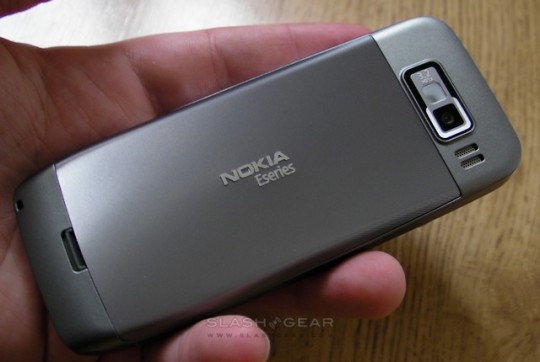 In fact, both phones seem to prioritize everyday usability and reliability. Their cameras eschew complex flash assemblies and auto-focusing lenses in favor of a new “extended depth of field” (EDoF) fixed-focus lens. EDoF uses some nifty processing to eke better clarity out of a simpler lens assembly, and in decent conditions it works reasonably well. By “decent” we somewhat obviously mean bright lighting, since the LED flash is as mediocre as LED flashes in general always are, and lacking a macro mode they produce increasingly softer images when you get closer than a half-meter or so. Still, not having to wait for auto-focus to click into place does mean shots are taken very quickly, and even fast-moving subjects can be caught with little blurring.

The E52 and E55’s real strengths, though, is in their battery life. Nokia quote up to 8hrs GSM talktime or 6hrs WCDMA talktime, together with up to 23 days GSM standby or 29 days WCDMA standby. Alternatively the crisp-sounding music player – which is crying out for you to lose the included stereo headset and plug in a pair of your own headphones, at which point the quality is very good – should manage up to 18hrs playback. We found that with WiFi constantly turned on, together with push-email from an Exchange server, a few phone calls each day and some SMS messaging we managed close to five days of before needing to charge the battery, making the E52 and E55 excellent choices for those prone to forgetting to charge their cellphone. The freedom of being able to, say, go away for the weekend and not bother packing a charger takes some beating.  Not only that but voice call quality is excellent, both normally and when using the speakerphone.

Contrary to our original expectations, we preferred the Nokia E52 to its E55 sibling. The unusual keyboard on the E55 may find favor for those whose fingers aren’t already trained in T9 predictive text, but we struggled with the compact layout and frustrating symbol selection. Meanwhile the standard keys on the E52 made it perfect for the sort of one-handed use a slim, traditionally-designed handset is best for. S60 remains an uninspiring OS compared to much of what else is happening in the smartphone market, but it’s capable and, with Exchange support and a little patience, both the E52 and E55 could be both your business handset and your personal one, with the stellar battery life to span a whole working week without gasping for breath.