Whether or not 28 days between its announcement and it shipping sets a new record for the company, the Nokia C7 is a welcome addition to the Finn’s smartphone line-up. Slotting into the company’s mainstream range, it’s the second Symbian^3 device after the Nokia N8 we reviewed a few days ago. More first-impressions, plus hands-on photos and video after the cut.

Unlike the N8’s well-stocked box, the C7 makes do with a somewhat sparser selection of accessories. There’s a compact 2.5mm charger (rather than a microUSB charger, though you can rejuice the C7 via its microUSB port) and a basic wired stereo headset with an in-line call answer button and microphone, together with a very short – as in only a couple of inches – USB cable, getting-started guide and the phone itself. Unlike the N8 there’s no HDMI output, but the C7 does support USB On The Go; you’ll have to buy the required cable yourself, though, since Nokia don’t bundle one.

The C7 itself feels sturdy and expensive, with lashings of metal around the bezel and the battery cover, and a glass front panel covering the 3.5-inch AMOLED capacitive touchscreen. As on the N8 that runs at 640 x 360 resolution, and in fact our first impression is that both devices run pretty much identically. Nokia’s usual suite of apps – Ovi Maps, a shortcut to the Ovi Store, the video editing software – are all loaded, and you have three homescreens to customize, each with up to six widgets. 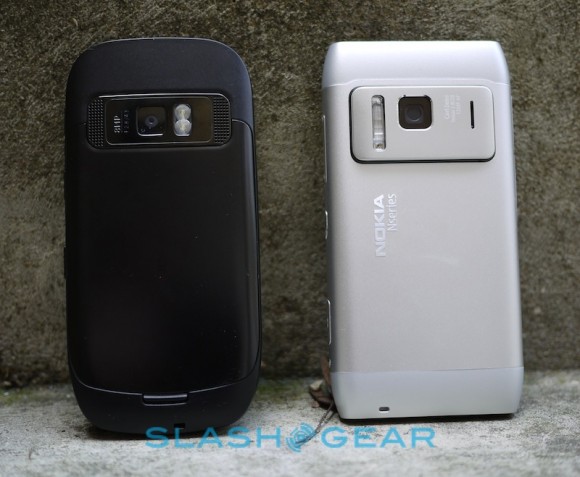 On the back there’s an 8-megapixel camera with autofocus and a dual-LED flash; no Xenon or 12-megapixels as on the N8, but it does make the C7 slimmer and less likely to catch on a pocket or bag. It’ll record 720p HD 25fps video clips, too. The C7 also shares the N8’s superlative connectivity: as well as WiFi b/g/n and Bluetooth 3.0 there’s quadband GSM/EDGE and five-band WCDMA, making the handset suitable for both AT&T and T-Mobile in the US, and use across Europe.

At a casual glance, then, the C7 arguably offers the best of the N8 at a considerable saving: it’s €335 pre-tax and subsidies, but we’d imagine carrier deals will bring that down to a free device and a relatively cheap monthly agreement. Whether it’s worth the money is still to be seen, however; we’ll be working that out for the full SlashGear review.