In the trailer for No Man’s Sky, the developers at Hello Games have shown a game that’s about exploration of a fully procedurally generated set of environments. What this means is that the computer decided what to put where with only minimal input from the developers, this resulting in a universe – planets and outer space – able to be explored by the gamers who dive in for the first time.

The suggestion here is that the developers created an extremely expansive environment in which, as they say, “every atom” is procedurally generated. The team at Hello Games announced this game at the Spike VGX awards, resulting in what we’re to understand was a showing which “just handed the rest of the VGX its collective lunch.” That’s according to Kotaku where they’ve also (handily) let it be known that the music in the trailer is “Debutante” by 65 Days of Static. 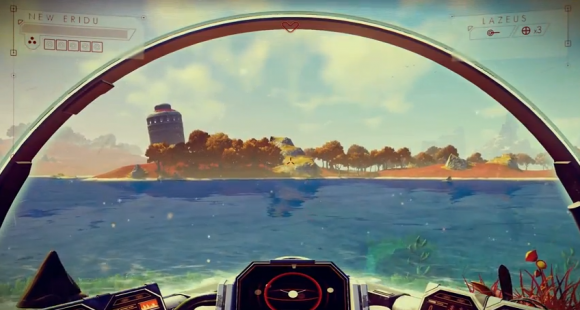 The above quote circulating from Hello Game’s own Sean Murray through Polygon suggests that they’re aiming for this game to touch gamers in a whole new way. What we don’t know (yet) is how close this game is to actual playability.

The game will be persistent – ever-changing as players dive in and affect it. Users will also not necessarily be the most dangerous beings on the worlds or in space – No Man’s Sky will be as much about survival (here and there) as it will be about exploration.

This is just the first whisper of the title from Hello Games. We’ll be chatting with them and seeking the truth in the near future as well – stay tuned for the development of this game as it takes place!