This striking Nissan IMs concept aims to save the sports sedan

With SUVs and crossovers increasingly popular, is there still a place for the sports sedan – or room for it to reinvent itself? That’s the question Nissan is asking at the Detroit Auto Show 2019 with the Nissan IMs concept, an “elevated sports sedan” that weaves electrification, luxury, and performance into one striking car.

From the outside, the matte gray paintwork and crisp angles already set the IMs apart from Nissan’s production cars. It’s an evolution of the automaker’s V-motion design language, one forced to reconsider its core themes when the traditional grille is no longer present. 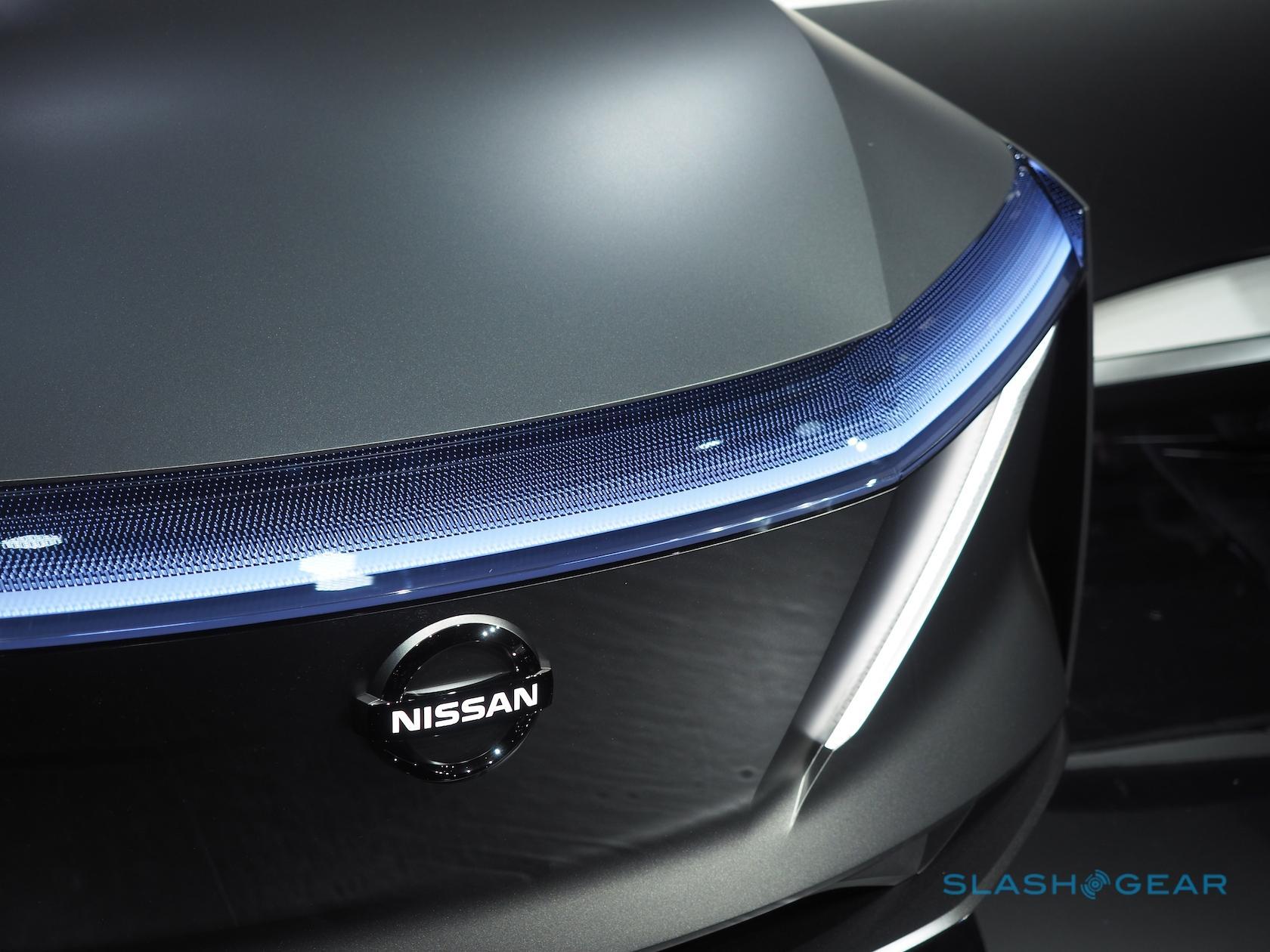 Instead, the V-shaped theme shifts to the headlamps. The IMs has thin, squinting lamps that bleed into the front fenders, the edges almost architectural in the way the car’s sides extend beyond the hood line. The light bar continues across the width of the hood, an illuminated brow atop the glowing Nissan logo.

It’s not just for the visibility of a human driver: the lights front and rear also communicate to other motorists. Nissan envisages the IMs as being capable of fully autonomous driving, at which point the lighting turns blue to show the car is driving itself. Light patterns flow from the front to the rear of the IMs, to keep pedestrians and other drivers aware that the AI is in charge.

Fully-electric, there are twin motors – one for each axle – that together deliver 483 horsepower and 590 lb-ft of torque. A 115 kWh battery would be good for around 380 miles of range, Nissan suggests. Despite its ability to drive itself, the IMs is also focused on keen human drivers. 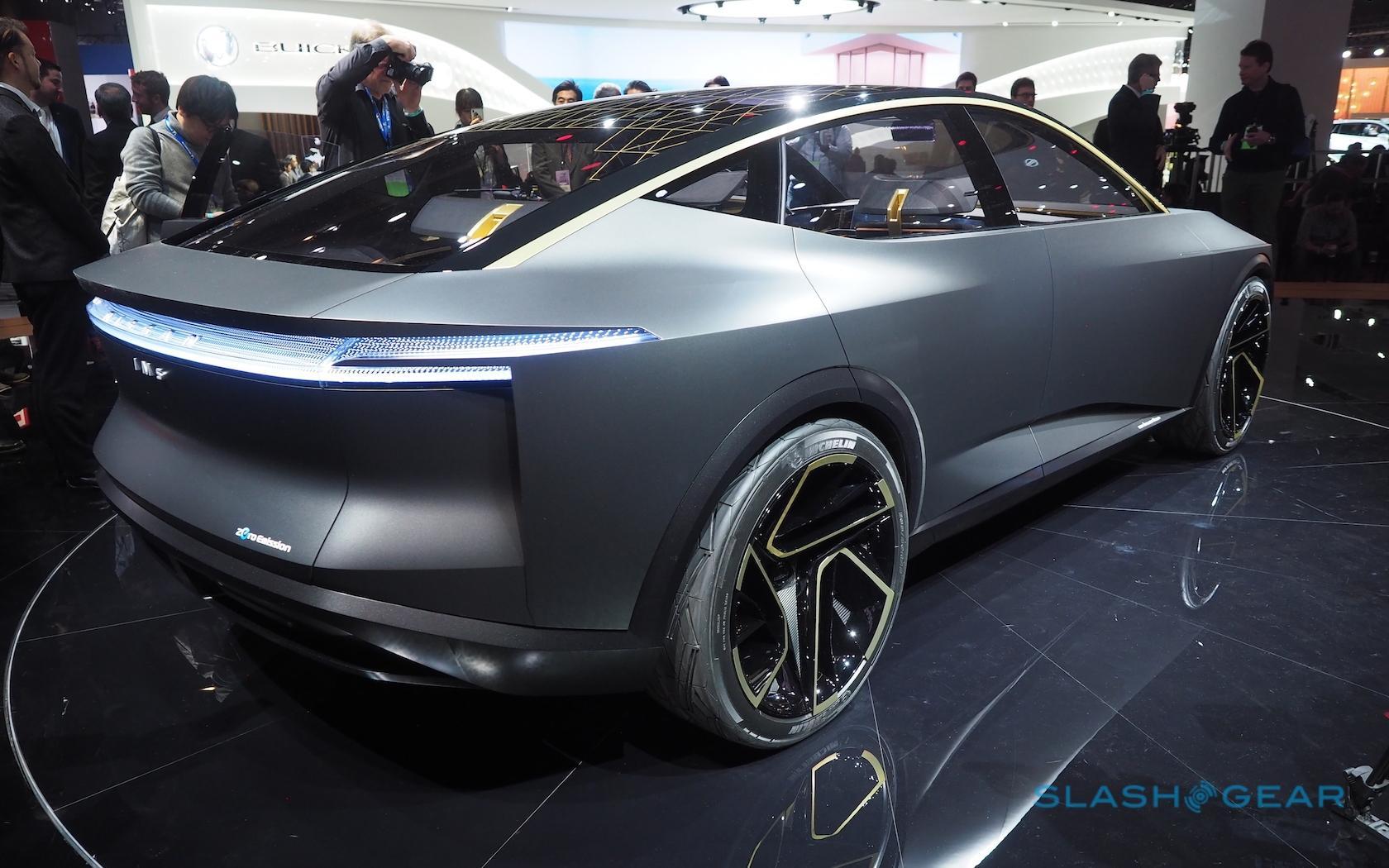 Perfect front-rear weight balance, advanced air suspension to keep the IMs level in the corners, and beefy wheels for extra traction, the concept car could keep up with the best of the sports sedan category in twisty mountain roads, Nissan promises. 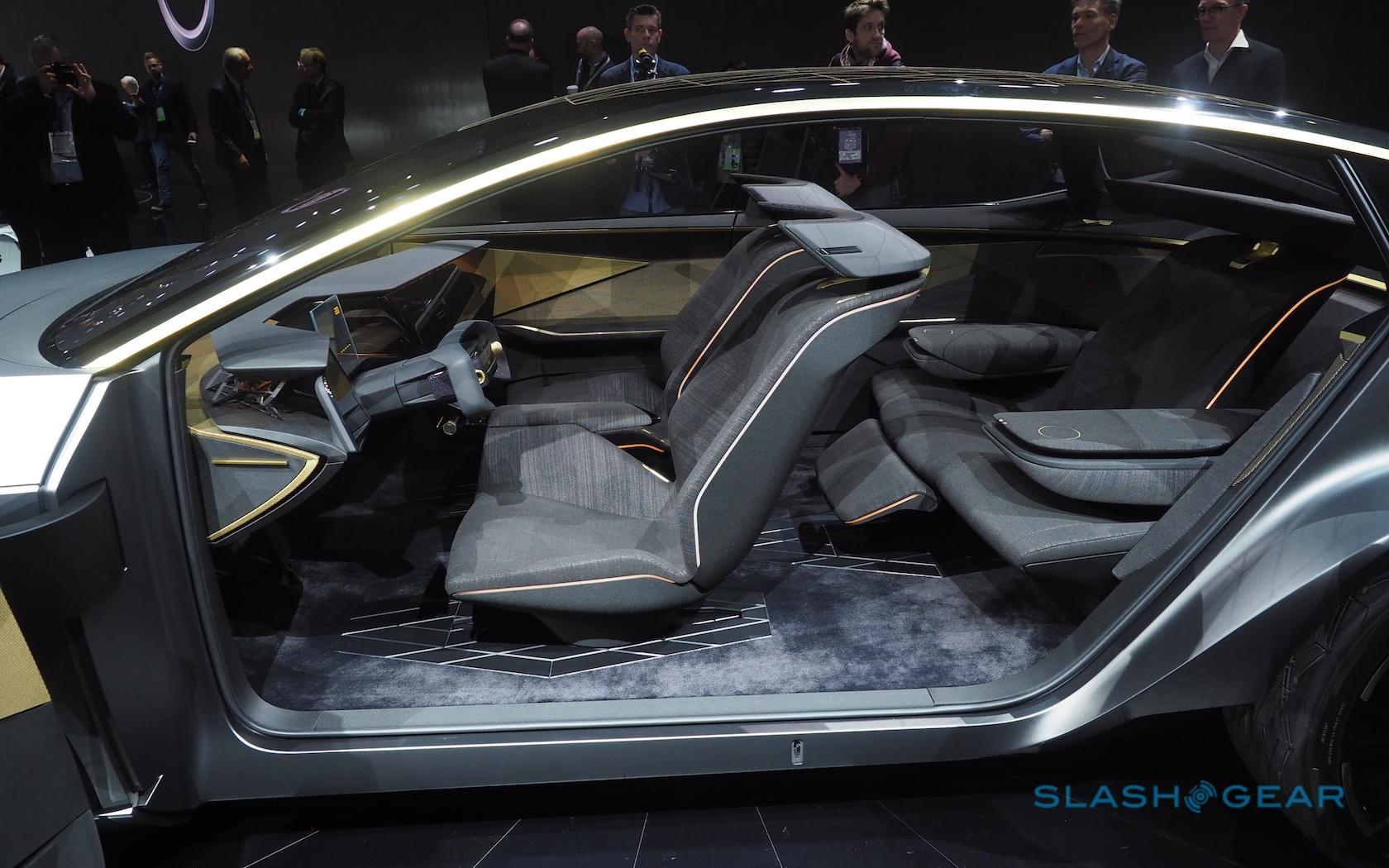 Step in through the huge door opening – helped by the rear-hinged back doors – and the value of the EV drivetrain makes itself clear. By pushing the motors to the edges, and slinging the battery under the floor, the cabin itself can be used more flexibly. Unlike with most cars, in the IMs there’ll be arguments about who gets to sit in the middle rear seat. 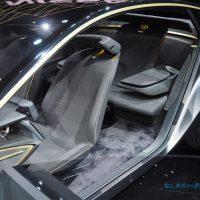 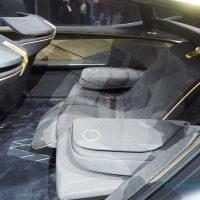 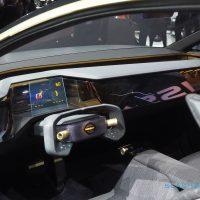 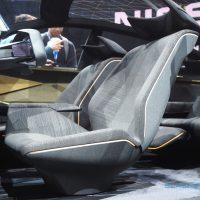 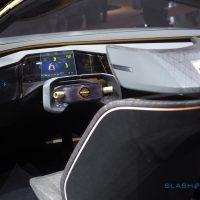 Nissan calls it a 2+1+2 layout, with a “Premier Seat” in the center of the second row. Fold up the outbound seats, and there’s a sizable throne for more luxurious travel. It gives a clear view through to the glass dashboard, which blends a digital touchscreen and AI assistant behind the full-width display. 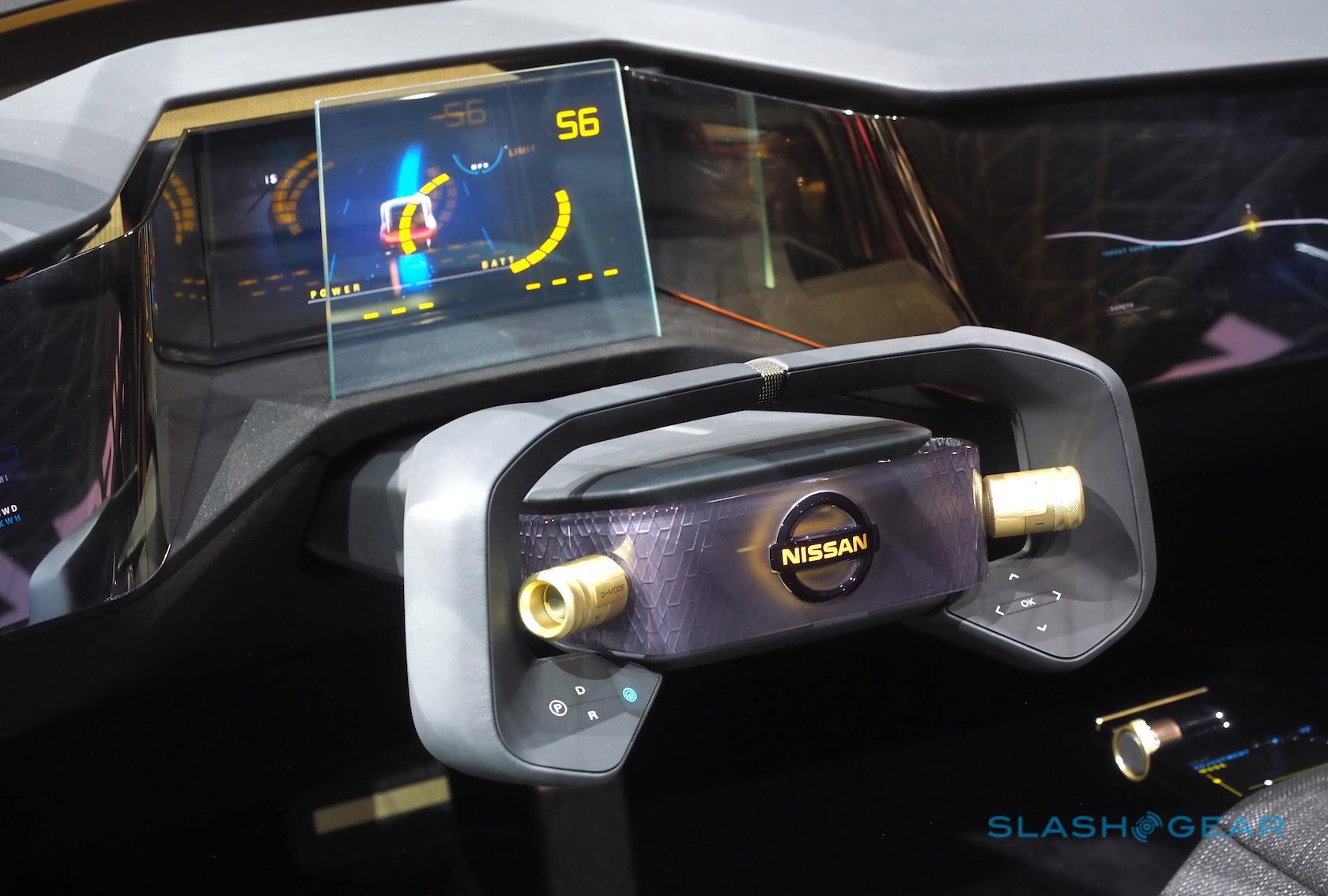 When you’re in control, meanwhile, there’s an angular steering wheel and a double-stacked display for instrumentation. A transparent screen with core data is overlaid on a secondary panel with more information. The car’s intelligence could intuit your needs – trying to figure out where you’re driving to, and offering navigation information proactively – or you could use voice or touch controls to control the system. 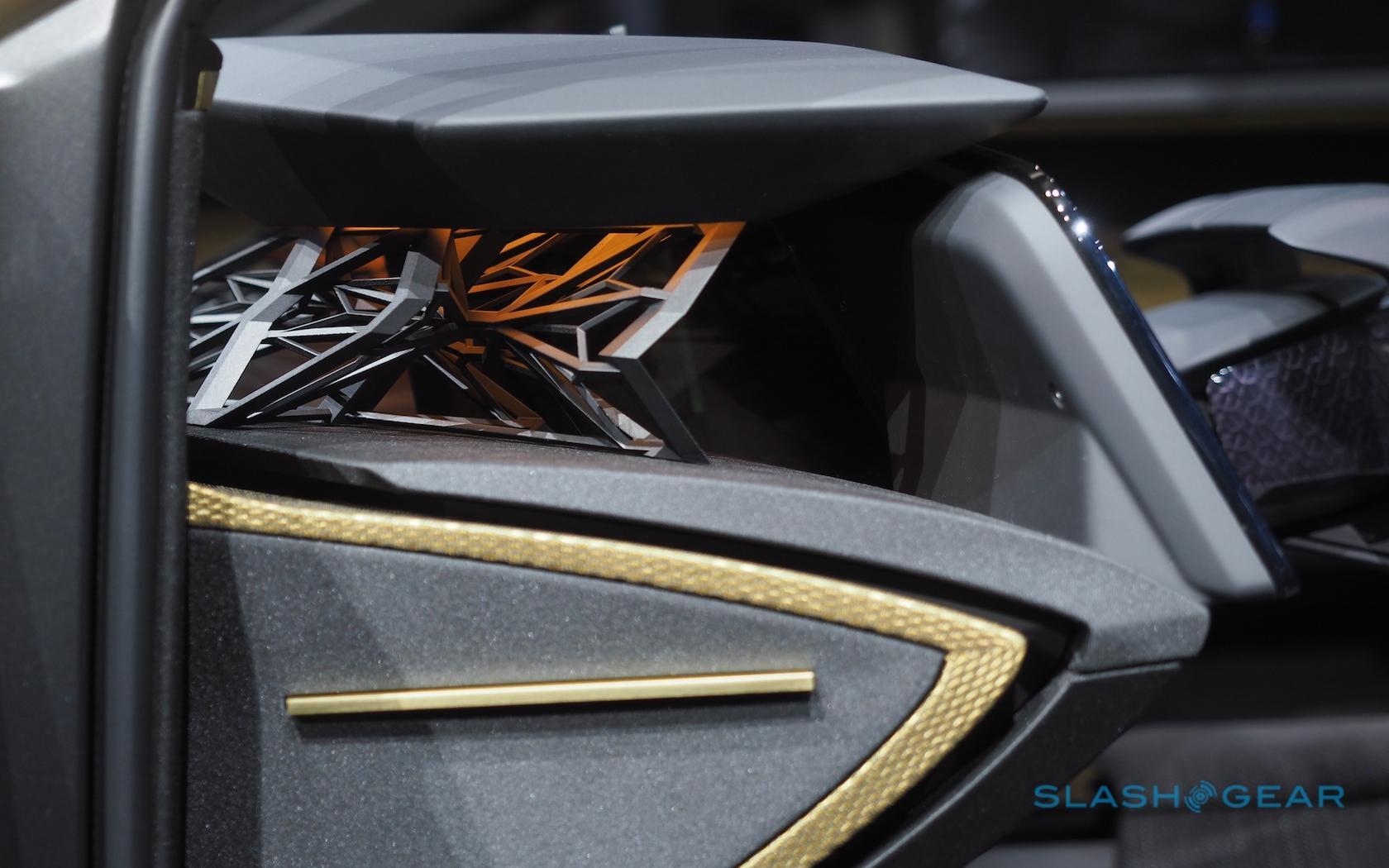 There’s certainly a question to be addressed about the auto industry’s progression toward autonomy: what happens to people who want to drive themselves? Rather than exiling such drivers, Nissan has a vision of them saving their time at the wheel for when the roads are rewarding. The rest of the time, you retreat to the “Premier Seat” and allow the computers to deal with the humdrum commute and any congestion encountered along the way. 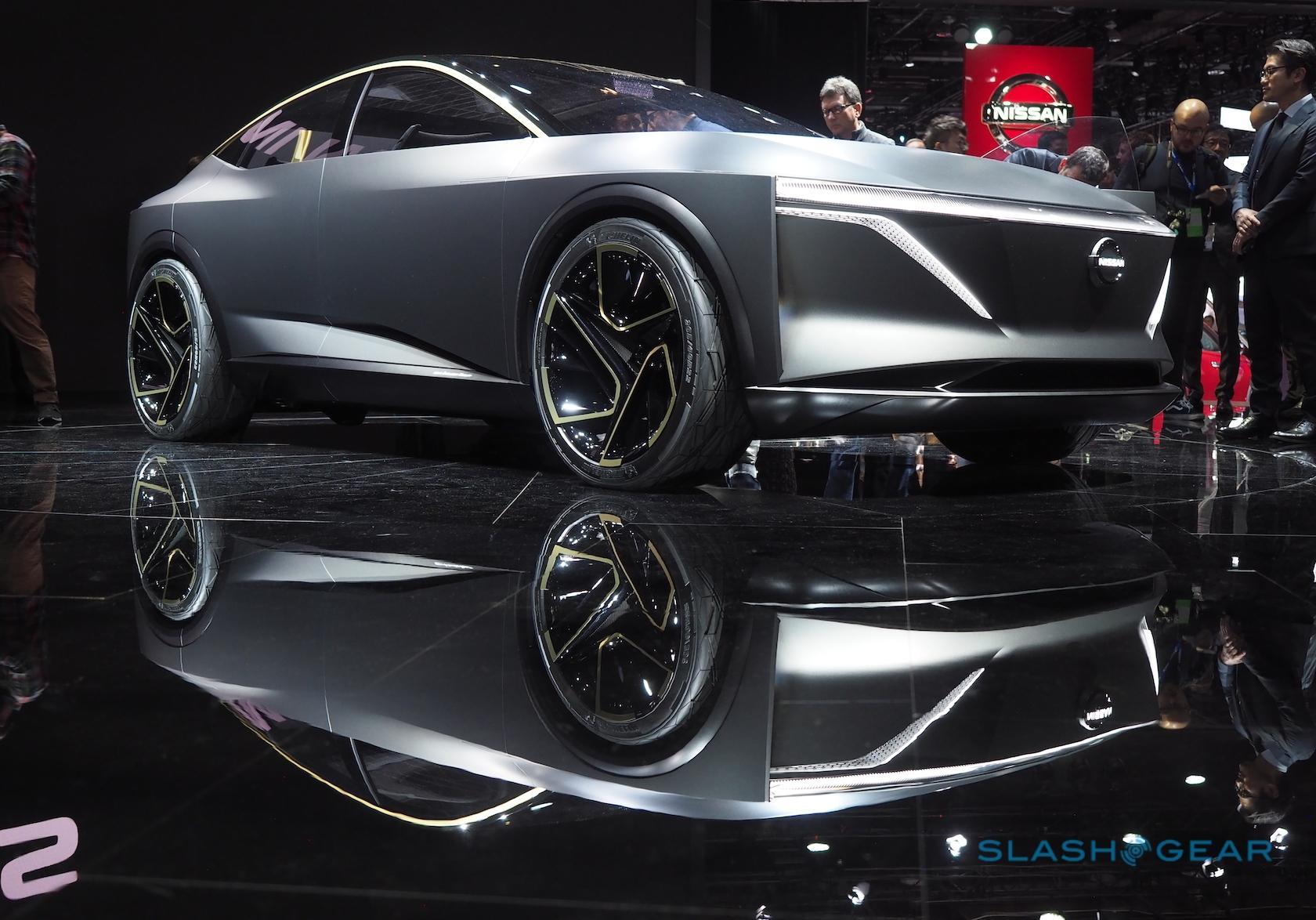 As a concept car, of course, this IMs isn’t headed to showrooms any time soon. Still, Nissan is using the vehicle to explore how electrification could be rewarding for those who might not traditionally be found behind the wheel of an EV. That bodes well for anyone who associates electric with unentertaining.