Nissan has announced that it and the Japanese Aerospace Exploration Agency (JAXA) are working together to develop a new rover prototype that could one day explore the moon’s surface. Nissan has worked with JAXA on improving driving controllability since January 2020. Lunar rovers are faced with significant challenges when tasked with exploring the surface of the moon.

One of the major challenges is the regolith that covers the moon’s surface. The material is very powdery and tends to cling to anything it touches, making components wear faster and at times damaging sensors. The lunar surface also has rocks and undulating terrain that requires a rover with enough controllability, power, and robustness to survive and work.

Nissan’s work on the rover prototype focuses on motor control technology that has been developed for the LEAF electric vehicle and its e-4ORCE all-wheel control technology utilized on the new Ariya electric crossover. Nissan says its e-4ORCE tech is an important component for the JAXA rover that is helping to boost performance over challenging terrain. 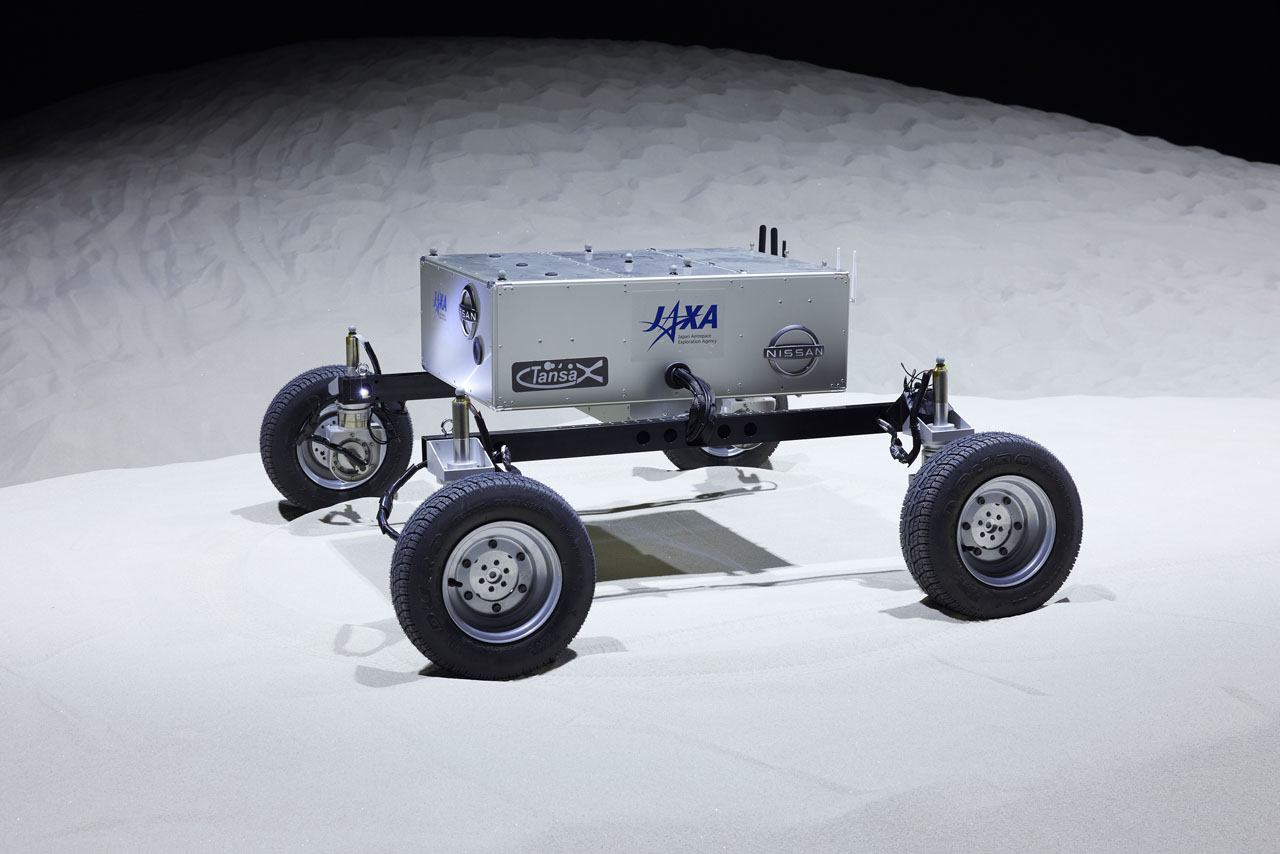 Nissan’s technology helps to improve control of the vehicle’s wheels in various terrain, particularly in sandy and harsh conditions. The lunar regolith isn’t sand like we would see on a beach, but it offers some of the same challenges to wheeled vehicles trying to explore the lunar surface. When a car drives through sand, wheels spin causing them to dig into the surface, leaving the vehicle stuck.

On Earth, if you get stuck, you can be pulled out. On the surface of the moon, roadside assistance is unavailable. So if a lunar rover gets stuck while exploring the surface, its mission is done. To help prevent the rover prototype from getting bogged down in the lunar regolith, Nissan developed driving-force controls that minimize wheel spin depending on surface conditions. 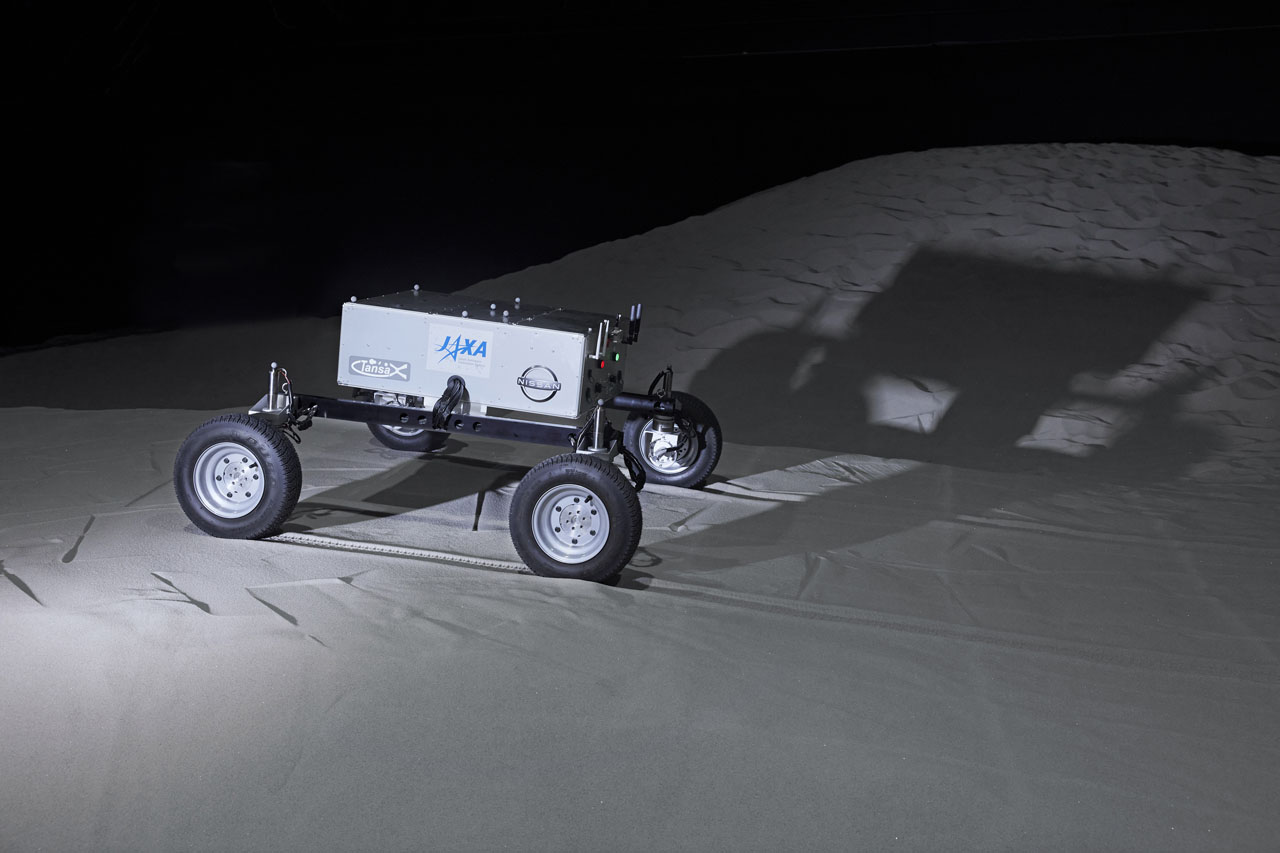 Nissan and JAXA are conducting joint research and sharing technology developed for the automotive market, while JAXA shares its rover design and research expertise. JAXA works with numerous companies, universities, and research institutes on various projects and aims to apply its research to future space exploration. The research goal for Nissan is to apply what is learned during the research to future high-performance lunar rovers.

Nissan says through its work with JAXA, it hopes to bring innovations to its vehicles that will benefit customers in the long run. The e-4ORCE technology that Nissan is utilizing for the lunar rover was originally developed for its new Ariya electric crossover. The technology allows torque for each electric motor to be individually controlled to improve traction during acceleration. 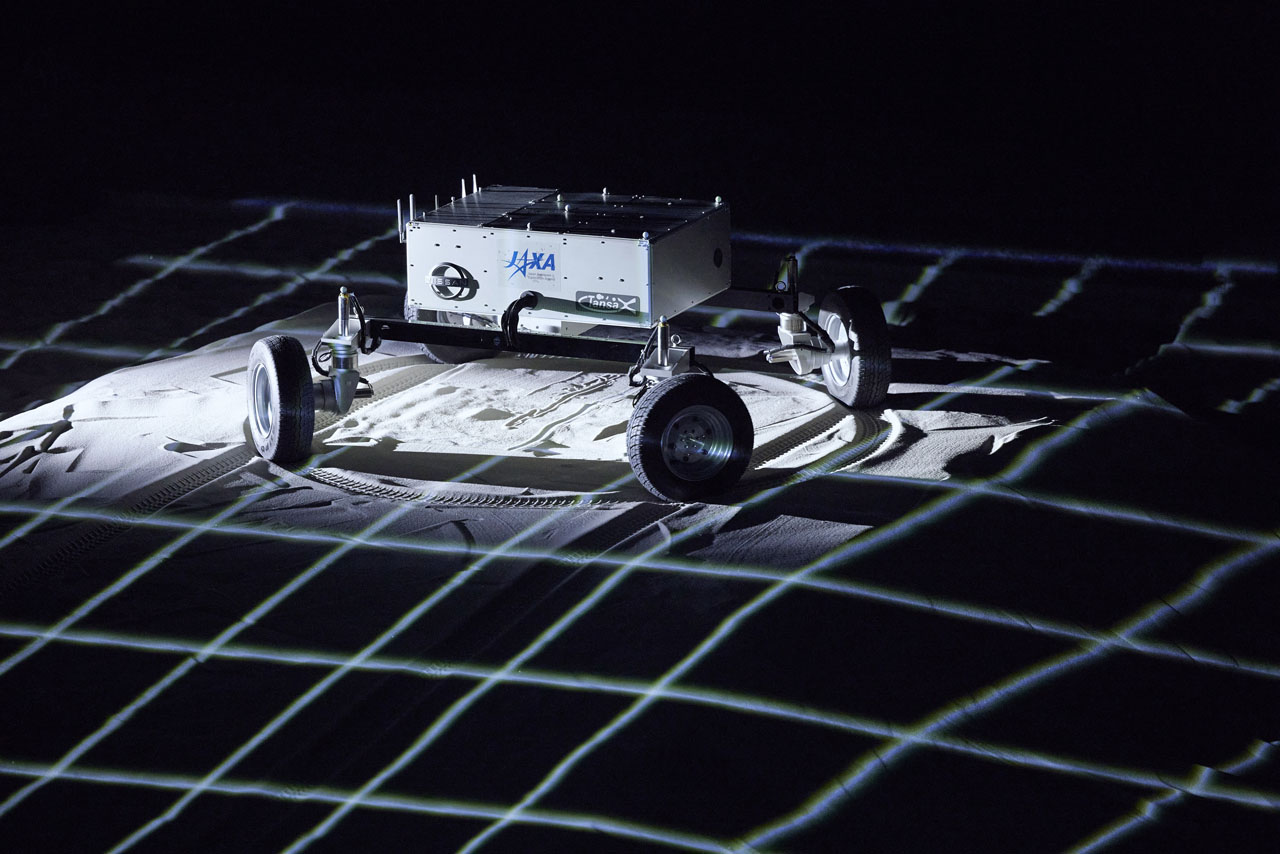 Traction can be a challenge for electric vehicles because all of the torque created by the electric motor is available instantly. Cars utilizing combustion engines have to build torque, so less is available during launch, helping to minimize wheel spin. Nissan’s e-4ORCE technology can also control the amount of regeneration individually for the front and rear motors during deceleration and the technology minimizes dive and body shake during braking. While technology was originally developed to help drivers on Earth navigate road conditions, including rain and snow, it has benefits for exploring the moon’s surface as well.

Nissan plans to have its Ariya e-4ORCE model on sale in Japan in the summer of 2022. Nissan began accepting reservations for the 2023 Ariya last month. The vehicle starts at $45,950, presumably before destination and handling. The base model has 238 horsepower and 221 pound-foot of torque. To step up to the version featuring the e-4ORCE technology starts at $58,950. That version produces 389 horsepower and 442 pound-foot of torque and has a 265-mile driving range. The lunar rover JAXA and Nissan are working on doesn’t have a launch date.

There are other lunar rovers currently exploring the surface of the moon. China put a lunar rover on the far side of the moon. In October 2020, the Yutu-2 rover cruised the lunar surface traveling over 565 meters. It did have to go into dormant mode during the long lunar night but operated without a flaw for its first 23 lunar days.

Days on the lunar surface are significantly longer than they are on Earth. A lunar day spans 14 days on Earth, while a lunar night is 14 nights on Earth. China’s lander and rover had survived 660 Earth days on the far side of the moon as of October 2020. Early this year, the rover discovered a strange rock on the moon’s surface that Chinese scientists were investigating. The rock is believed to have been ejected from a nearby crater during an impact.

While Nissan and JAXA are working on their lunar rover, NASA is also working on lunar rovers for future missions. One of those rovers is the VIPER rover designed to search the lunar surface for water. VIPER stands for Volatiles Investigating Polar Exploration Rover and is approximately the size of a golf cart. NASA believes it will be the first rover to sample water ice from the lunar South Pole, where NASA plans to send astronauts on future Artemis program missions.