If there’s one thing Nintendo – no, scratch that, the world – needs more of, it’s gimmicky Wii controllers.  Thankfully the trusty patent system has given us a heads-up of what might be the next obscure gaming gadget to monopolize the holiday season, in the shape of an inflatable horse-riding controller.

The concept is simple, albeit mildly traumatic.  The inflatable cushion has a nook for your Wiimote, and thus can track your crazed bucking and rocking and translate that into horse movement.  Meanwhile you hold the nunchuk outstretched, as if a pair of reins.

Of course, you don’t just have to ride a horse: Nintendo’s patent lists a great variety of things you could mount, some real and some imaginary.  Among the former are bulls, camels, elephants, burros, dolphins and whales, while the latter includes such gems as dragons, griffons, unicorns and giant eagles.  If you tire of on-screen animals then Nintendo envisage a variety of “hang gliders or other aircraft, a magic carpet, a motorcycle, a jet-ski, a land or sea exploration vehicles.”

Of course, just because they’ve patented it, it doesn’t mean it’ll necessarily arrive on store shelves.  For the sake of the economy and our childrens future embarrassment, though, we can certainly cross our fingers and hope it happens. 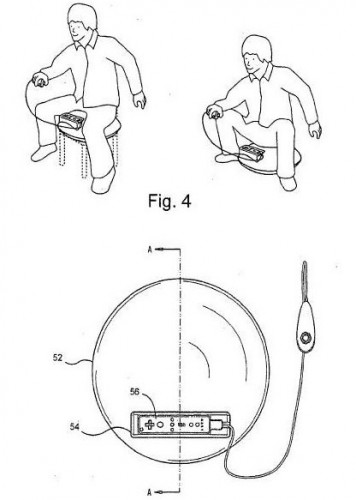