Nintendo’s inflatable horse controller not good enough for you?  The company’s latest controller patent application has come to light, and as you might expect it’s another bizarre, exceptionally-niche device.  Basically a squishy football with slots for your Wiimote and nunchuck, the controller would allow the Wii to estimate trajectory and distance from the force and angle with which you pretend to throw it.

Meanwhile a strap on the side would stop it from actually hurtling out of your hands and into your TV screen, though we reckon that – if it ever comes to market – there’ll be cases of just that within the first week or so.  Nintendo also envisage measuring running using the football controller, with the jogging motion picked up via the Wiimote.

A more complex version would include the MotionPlus add-on, and allow Nintendo to track orientation and recognize specific actions.  To be honest, this looks like it might stand a better chance of hitting shelves than the horse-riding controller (though we still prefer that), but we wouldn’t hold our breath on either. 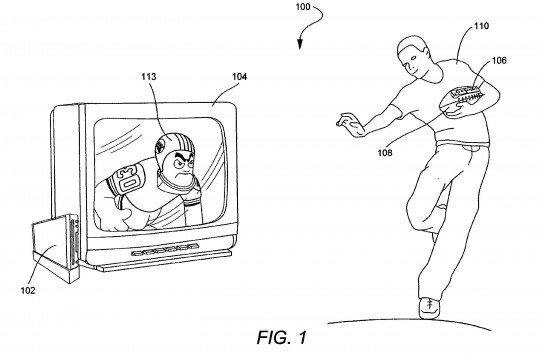