The Wii U will not support play of Wii Virtual Console or Wii Ware games on the GamePad tablet controller’s screen, Nintendo has revealed, while storage shortages in the Basic 8GB model may make installing games a headache. After formatting, the cheapest Wii U will have 7.2GB of its 8GB capacity (or 29GB for the 32GB model) but the console requires 4.2GB itself, Nintendo confirmed in a new Japanese-language Direct video; that means, with New Super Mario Bros. U and Nintendo Land weighing in at roughly 2GB and 3.2GB respectively, gamers won’t be able to fit both onto the basic Wii U set at the same time.

In fact, according to a translation of the key points at NeoGaf, there are a few storage considerations to bear in mind. Data can be stored on a USB hard-drive up to 2TB in capacity – though not a flash drive, which Nintendo says is a stability limitation – but it must be formatted to suit the Wii U and then cannot be used with a PC. Files can be shuffled between the Wii U’s internal storage and an external drive via an option in the Data Management menu.

Only one external drive can be plugged in, at least at launch, though Nintendo says it is working on an update to change that. SD cards, meanwhile, can be used to store PC, Wii Virtual Console, Wii Ware, and Wii save data, but not Wii U game save data. USB drives will not be hot-swappable, either. 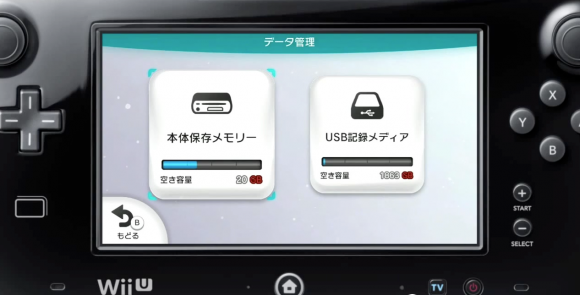 As for GamePad limitations, according to Nintendo the Wii mode will only support the TV as display, not the tablet controller’s own 7-inch screen. However, a new Wii U Virtual Console game is in the pipeline, that will support the feature.

Nintendo also detailed some system tidbits, including the ability to lock down internet browsing, e-Shop purchases, Miiverse functionality, friend registrations, videos, data management, and other settings, based on age, preventing children from accessing content their parents would rather they didn’t. There’ll also be individual dictionaries for user-added words for each gamer.