Whenever there’s a price cut of such a magnitude for a device of such importance as the Nintendo 3DS, one would expect there to be a new device coming out OR for the company selling the device in question to be in some sort of big trouble. What we’re looking at here instead is a price cut before a brand new color combination is released for the casing on this device. This leads us to believe that either Nintendo had always planned to lower the price to this point immediately before the Flame Red color release OR both the color combination and the price point are now in place to make a renewed move for higher sales in the face of a sinking traditional games market.

If you’d like to know more about the Nintendo 3DS, you can check out our full review of the device as it appeared when the device was first released. If you’d like to pick up the Aqua Blue or Cosmo Black version of the device right this moment for the discounted price, you’ll be able to do so across the board: Amazon.com, Best Buy, GameStop, Kmart, Target, Toys R Us, Walmart, and Sears. The Flame Red version of the device, on the other hand, is only available for pre-order at Amazon.com, Best Buy, GameStop, and Walmart. 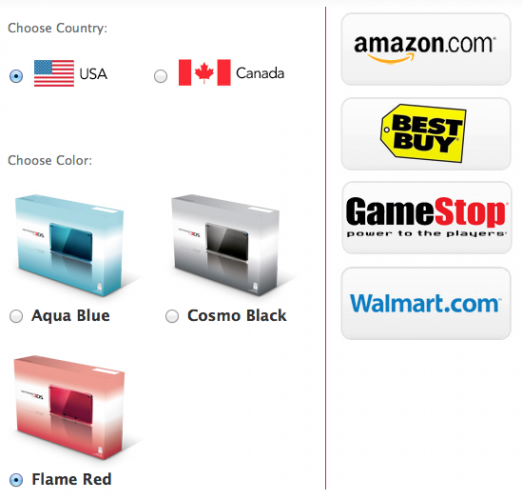 One gigantic reason you may want to pick this device up is the release of Star Fox 64 3D, one of the most awesome names in Nintendo-specific space battle games in history. And it’s in 3D, so it’s going to be twice or three times as awesome, right? Meanwhile we’ve still got an apologetic open-letter from Satoru Iwata, Nintendo’s president, speaking on the fast-changing games ecosystem and the need to convince game publishers of the console’s potential on the price cut so soon after the release of the device itself.

What do you think? Look like the system for you yet?