This week Matthew Inman from the illustrated blog and comic The Oatmeal initiated a funding project which would help pay for the public purchase of Nikola Tesla’s original laboratory site for use as the first USA-located Tesla museum. In Inman’s request (which of course took the form of an illustrated comic-like plea), he suggested that the Tesla auto company donate to the cause. The auto company is owned by none other than Elon Musk, who the folks at Jolopnik got in contact with, who agreed just this morning to donate online.

Whats perhaps just as important as the idea that Musk will be donating is the fact that Musk’s promise included the idea that he’s be “happy to talk to Jane.” This Jane character is Jane Alcorn who runs the non-profit organization responsible for running the fund-raiser that will make this all happen, and Inman’s suggestion that Musk speak with her included that it be if he were planning on donating “a large amount.” 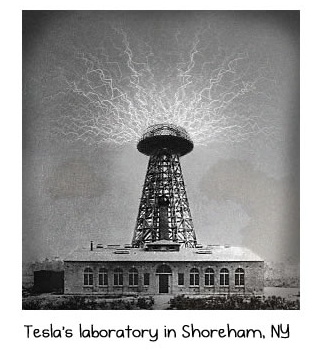 So what are the logistics here?

The Elon Musk laboratory site is up for sale for $1.6 million dollars – the non-profit in charge of fund-raising to purchase the land for later construction of a Tesla museum has received a matching grant (given only if the amount is matched, of course), for $850,000 USD. This means that the non-profit must raise $850,000 and the land will be preserved! Of course that’s just one step. There’s still a need for more donations to come in and fund a museum of the future.

Elon Musk comes in at a great moment when they’ve already got $400,000 USD donated after just a bit over a day. With his help, we’ve got no doubt that the project will at least reach its goal of preserving the site. Head over to the Tesla Museum post on The Oatmeal to find out how you can get in on the awesomeness now. And if you know anyone with connections in all the right places, feel free to tell them there’s a museum that needs building!

ALSO If you have no idea who Nikola Tesla is, The Oatmeal also has a comic you need to read that will tell you everything you need to know. Have a peek at the emails that went back and forth between Jalopnik, The Oatmeal, and Musk himself right here, and jump for joy at it all: 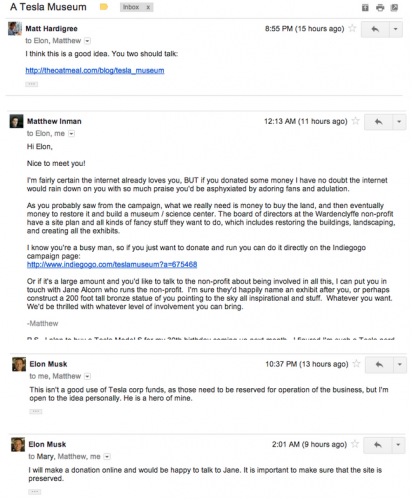