A new pair of shoes from Nike turned the Back to the Future II concept into reality – and beyond. This isn’t another iteration of the Michael J Fox MAG shoe. Instead, it’s the first “custom show for everyone,” so says Michael Donaghu, Nike VP of Innovation. Inside the first Nike Adapt BB shoe is what Nike describes as an “intricate lace engine” that advances the state of shoelaces for the first time in hundreds of years.

When you first put the Nike Adapt BB on, you’ll lace them up according to your preference. Every time after that, assuming its you who continues to wear the shoe, you’ll find that the shoe laces itself perfectly, according to the size of your foot. And more importantly, your preferences – they’re adapted with a connected app.

“Shoes in our Nike Adapt platform — of which Nike Adapt BB is the first — can update and evolve after purchase, letting consumers opt in to provide you with new services and features through smartphone-like technology,” said Donaghu. “In other words, we’ve finally added firmware to footwear, letting us continuously improve the product you’ve already bought, responding as need be to changing preferences and environments.”

This shoe can stay the same size when you’d like it to stay the same size – or it can adapt as you move. “During a normal basketball game the athlete’s foot changes and the ability to quickly change your fit by loosening your shoe to increase blood flow,” said Eric Avar, Nike VP Creative Director of Innovation, “and then tighten again for performance is a key element that we believe will improve the athlete’s experience.”

The tech inside is branded FitAdapt, and users will find the shoe rolling with a tensile strength able to pull 32 pounds of force. That’s “roughly equal to that of a standard parachute cord.” 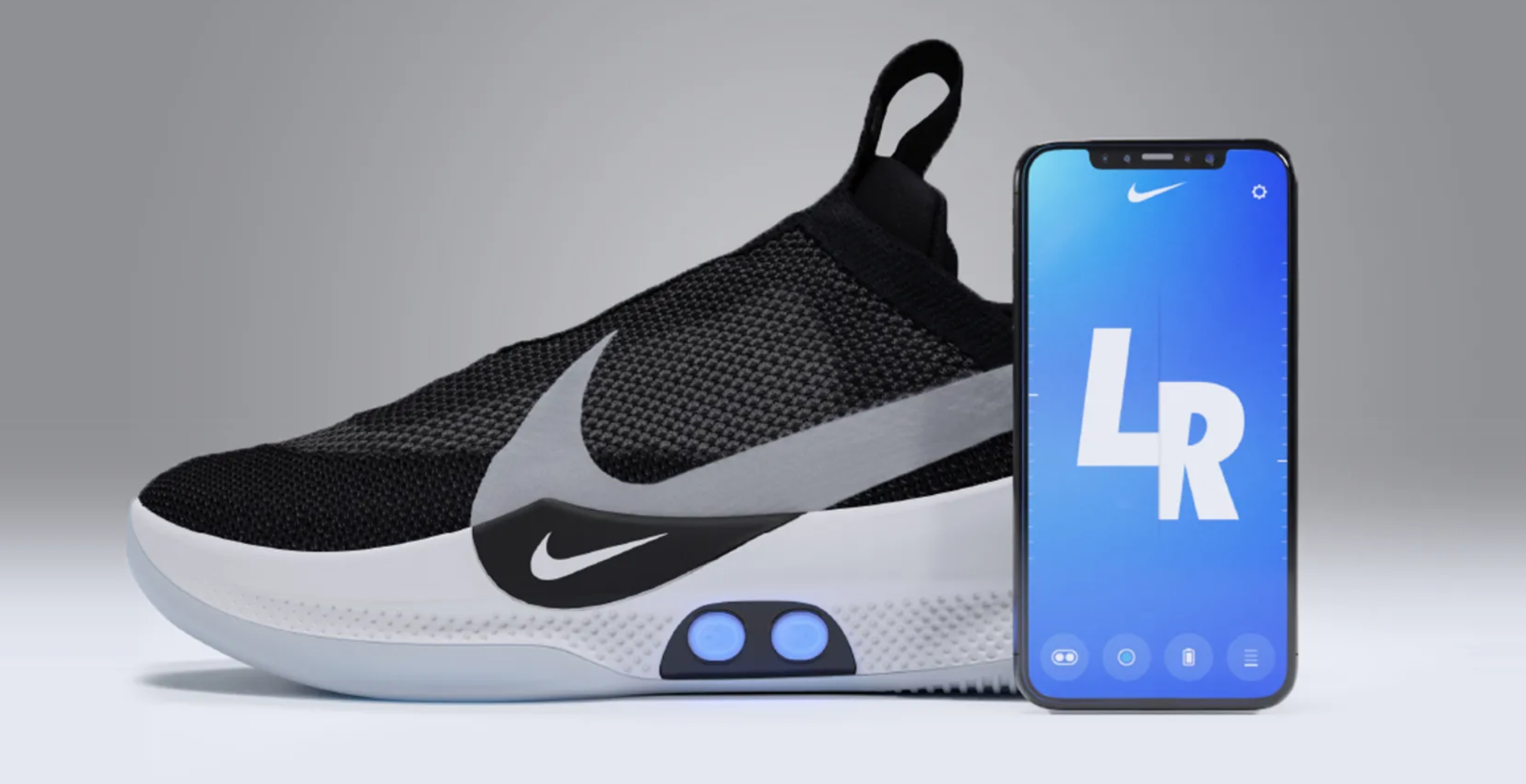 To lock the fit the first time, the user will touch the light-up button on the side of the shoe. The user can also choose to lock in their fit in the connected app. The shoe’s button colors (lights) colors can change, adjusted by the app, and the user can check the battery life of each shoe at any time.

It’s not immediately clear where the shoes plug in to charge up – or if they use wireless charging, etcetera – but there’s gotta be a component at some point. Also of note – the laces aren’t shown on the exterior of the shoe. Instead, they’re all under the hood – likely to avoid the possibility that a lace might pull tight on an unsuspecting finger – ouch! 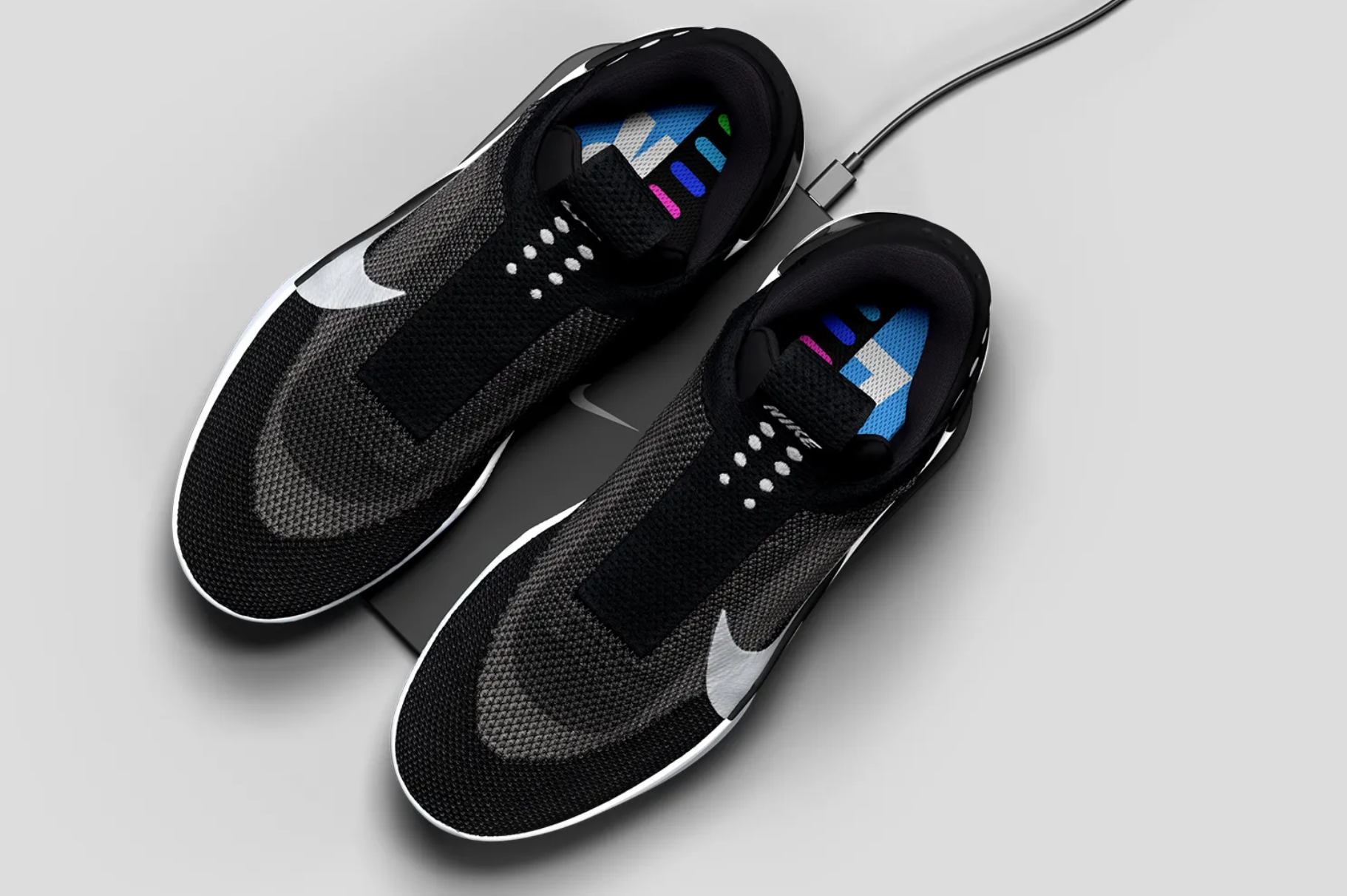 UPDATE: The cover over the laces is optional – but you’ll probably want to keep it in place when you’re in the game. Also the Nike Adapt BB wireless charger was shared – charging will be super duper easy. It wont necessarily be that fast, but it will be that easy.

The Nike Adapt BB shoe – the first version – will be available at Nike dot com starting at 10AM Eastern Time on February 17th, 2019. They’ll likely be available in select stores, as well. At that time, users will be able to own a pair for $350 USD.