The Apple Watch Series 4 was released two weeks ago now, but athletes and fans of the Nike brand now have the option of picking up the new Nike+ version of the smartwatch. As of Friday, October 5th the Apple Watch Nike+ Series 4 is now shipping for online orders and available at Apple Stores, although in limited quantities. While the branding and name might suggest a significantly different Apple Watch, like previous models the Nike+ Series 4 is almost identical to the regular aluminum version of the new Watch Series 4.

While the differences between the regular and Nike+ Apple Watches are small, there are a few. The biggest is that the Nike+ Series 4 comes with unique, customizable Nike watch faces that are pre-installed. There’s also different Nike sport bands to choose from, but these can be purchased individually and used with any Apple Watch model; the Nike watch faces can’t be downloaded or added, and are truly exclusive to the Nike+ version.

Other than that, the choices are almost the same as any Series 4. The Nike+ version is aluminum and comes in black or silver, 40mm and 44mm sizes, and in GPS-only and GPS+LTE. Pricing is the same too, with GPS models starting at $399 in the US, and LTE models starting at $499. 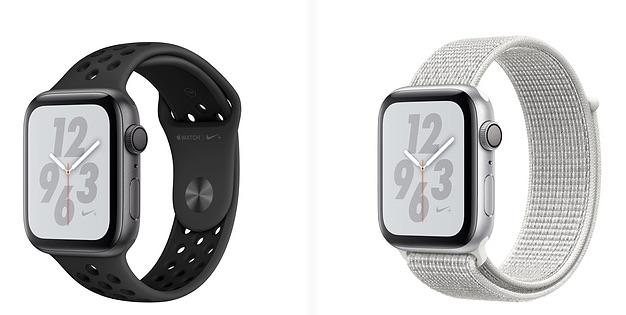 The Nike+ Series 4 comes paired with the perforated sport band in either black or white, or the new Nike version of the woven sport loop in black or white. The latter features reflective threading that’s meant to shine when hit by light in situations like running at night. Lastly, the smartwatch comes with the Nike Run Club and Nike Training Club apps pre-installed, however these can be installed on any Apple Watch model and will work exactly the same.

The Apple Watch Nike+ Series 4 is available now in a large number of countries around the world. Ordering online is the best bet, as Apple Stores’ selection will be limited when it comes to sizes and color combinations, so there might be a waiting period.