Intel expanded on its Ultrabook platform at its CES press conference, focusing on a better user experience. With a tacit promise for faster CPU performance, longer battery life and lower prices on the platform going forward, representatives were especially excited for the Turbo mode for CPUs. This allows for a boost in performance, and a not inconsiderable bump for gaming prowess as well.

A Lenovo Sandybridge ultrabook boosted its CPU output to 87% of the performance of a standard voltage CPU, while compressing and emailing a collection of 200 photos. A CPU-based graphics demonstration showed off an Ivybridge laptop computing amazing graphics feats on integrated hardware, including the destruction of a virtual wooden bridge, calculating the position of thousands of logs and planks with extremely minimal slowdown.Each piece of debris was calculated and rendered at all points during the demo, which used only Intel’s previously uninspiring graphics processors. A troll graphics demo showed off animation and detail that’s about on par with current game consoles. 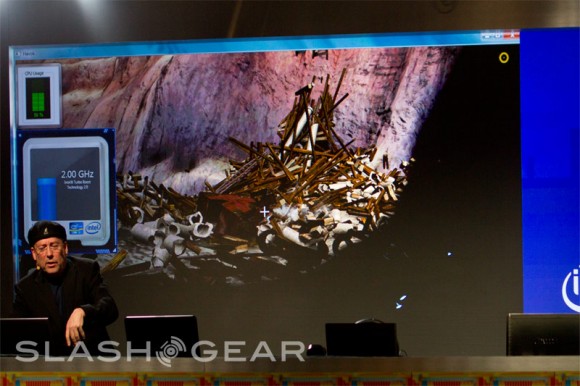 A DirectX11 demo of Formula 1 2011 was impressive – it looks like you can run a pretty solid framerate in just standard Ivybridge hardware. Of course, these are demos on demo hardware. But the next generation of Ultrabooks look like they can do some respectable gaming. You won’t beat out the latest AMD or Nvidia cards, but current-generation gaming may start to become a more tangible reality in the near future. The demonstrator teased significant performance gains, to be specified later at CES.