Volkswagen’s plans for the new Golf are being kept close to the automaker’s chest, but that hasn’t stopped it teasing details about the high-tech dashboard update the eighth-generation Golf will bring. We’re not expecting to see the new car until later in the year, though it’ll arguably be the biggest shake-up to the storied nameplate in its history.

That’s no small challenge for a vehicle that has been around since 1974, but the huge changes underway within the VW Group are forcing the Golf to adjust. Gone, in the eight-generation, will be the e-Golf, the all-electric version of the car that launched in 2015.

Its place will be taken by the VW ID.3, the new all-electric hatchback based on Volkswagen’s MEB platform. US drivers will have to wait for their taste of electrification, however. VW of America has opted not to launch the ID.3, instead holding off until the production version of the ID. Crozz electric crossover is ready.

To keep its edge, the new VW Golf will get a tech upgrade, most notably in the cabin. A sketch teasing the dashboard update for the eight-gen car sets out some of what we can expect, and as you might imagine it’s heavy on displays. 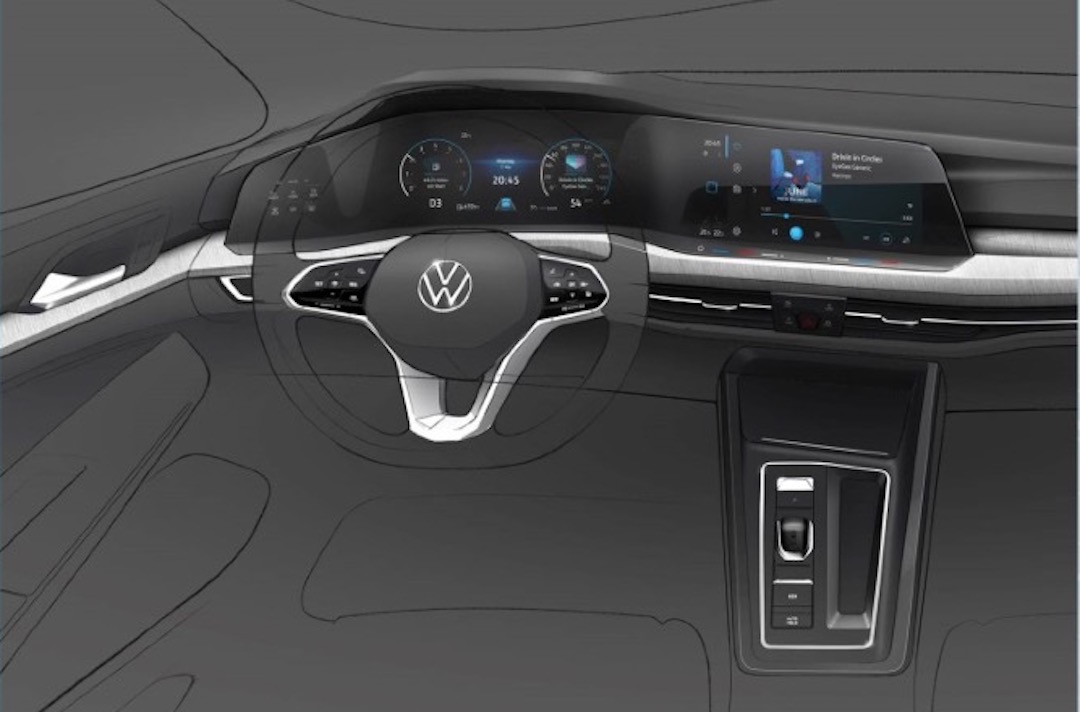 So, the driver instrumentation has been replaced with a fully digital panel, using the Volkswagen Digital Cockpit system that we’ve already seen on models like the Jetta, Atlas, and Tiguan. It’s accompanied by a second, large display atop the center console. That will presumably be a touchscreen and handle infotainment, HVAC, and other duties.

VW hasn’t done away with physical controls altogether, mind. There are shortcut buttons on the steering wheel, for example, and what look to be dedicated controls for climate control temperature and airflow underneath the center display and between the center console vents. More controls are set to the left side of the Digital Cockpit.

In the center tunnel, meanwhile, are more controllers. There’s what looks to be a version of the short, stubby transmission select lever Porsche has been using in its recent models, along with buttons that may well be for drive mode, the parking brake, or traction control.

Like the updated Golf exterior aesthetic previewed by an accompanying design sketch of the outside of the car, the overall theme looks to be a softening and smoothening of the hatchback. Gone is the somewhat monolithic dashboard with its dark colors, replaced by a smoother, sleeker version. We’re expecting a host of internet connectivity and smartphone projection technologies, too.

The full debut of the new Golf 8th Gen is expired to take place in October 2019. What remains to be seen is how many variations of the car make it to US shores, with some reports earlier this year suggesting VW of America had pared back its plans for the car’s launch. While overall vehicle deliveries in North America rose in April 2019, up almost 9-percent in the US, SUVs are the key performers responsible for that increase, rather than passenger cars.