Once upon a time, ok just two or three years ago, Korean rivals Samsung and LG were seemingly involved in a rat race for foldable, if not flexible, devices. The two have recently become silent, with both having achieved some amount of success as far as flexible screens go. Samsung, however, has definitely not given up on the dream just yet. A new batch of patents filed at the USPTO hints just as much, with three new designs that could pique one’s curiosity. At least as far as ideas go.

After it revealed on stage what it billed as the flexible YOUM display, Samsung has been famous, almost notorious, for its obsession with bringing about a future filled with foldable tablets or bendable smartphones. Ever since the debut of the Galaxy Note Edge, quickly followed by the Galaxy S6 edge, the OEM seemingly has fallen silent. Those curved edge smartphones, however, were just the opening salvo, more like a proof that i can, indeed, make usable flexible screens.

Of course, that is a far cry from the dreamy future that Samsung has been painting. A solid curved screen is one thing. A rollable or foldable display is another. The latter is what Samsung is ultimately trying to achieve, as shown by these three new designs illustrated in a patent the Korean manufacturer recently filed.

One design is probably the most different from what we’ve seen from Samsung so far. Here, the whole device rolls into a tube of some sort. Note that it doesn’t roll to form a tube like LG’s Rolly keyboard but seemingly goes inside of one. Unfurling the device is done by either pull it out, holding on to an exposed area or “tab” of the device. Alternatively, one side of the tube features a standalone display strip, filled with notifications and icons. Pressing on one of these app icons while pulling out the display would automatically open that app once fully unrolled. 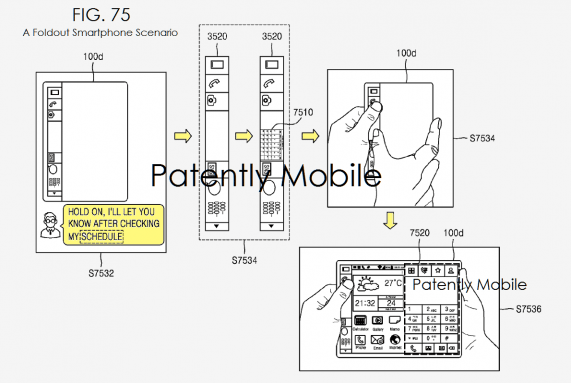 The second design is a slightly different take on the now familiar folding smartphone/tablet design. Instead of folding right in the middle, the fold is off-center so that a small area remains exposed when the device is folded. Like in the previous design, this strip could be used for app shortcuts, which launch the designated app when unfolded. 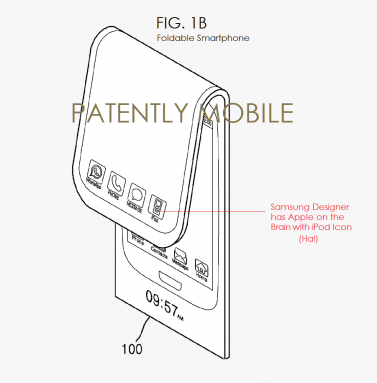 The third variant is probably the most ridiculous, almost like an inside joke for Samsung. Here, the smartphone bends vertical from a preset degree, not necessarily the middle. This creates something akin to a flap, where the back side (now the front) can also act as a display for shortcuts. Curiously, whoever drew that diagram included an icon for an iPod.

Of course, all of these are just ideas that Samsung is claiming for itself. It is no assurance of an implementation but it does give a bit of insight into what the creative minds inside Samsung are cooking up. While Samsung might have flexible displays down to a “T”, it still has a long way to go make other electronic parts bend to its will as well.