In today’s obligatory unveiling video of the new Android statue for Google’s lawn full of statues of desserts, a new Google smartphone has appeared. This may very well be the next-generation Nexus device as it does indeed have the word Nexus written on it – though in a bit of a cut with what may be some black tape over the logo for secrecy. This device looks to be replicating the look (and perhaps the feel) of the 2013 edition of the Nexus 7, what with its massive back-facing camera land and horizontal logo (which is also massive).

The device appears also to have an LG logo. This would follow with Google’s re-instating of manufacturers for the Nexus line, the Nexus 7 also having once again worked with the same manufacturer as the original model (ASUS). No details on this LG-made smartphone – no solid details, that is – are currently known for certain. 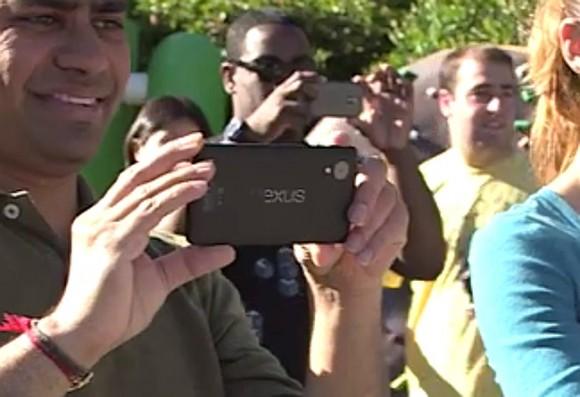 UPDATE: The video which contained this screenshot has now been pulled. All the more reason to believe it wasn’t supposed to be shown – OR – if you believe Google is the dogfooding type – that’ll be just what they WANT you to think.

What we’ve heard in the past – more than once – is the idea that Motorola will not be the chosen one for Google’s Nexus 5. This was the word soon after Google made it clear that they’d be acquiring Motorola, then once again after the Moto X was released – soon after the most recent rumor, word that the LG G2 impressed Google enough for a second round with the Nexus program. Last year the LG Optimus G (predecessor to the LG G2) was used as a basis for designing the Google Nexus 4.

Ironically enough, the screenshot taken from the Google video here shows a Googler using the Nexus 4 immediately to the side of what we’re assuming now to be the Nexus 5. It would seem safe to assume also that this device will be working with a thinner body – both signature features of the LG G2. Sound reasonable to you?

UPDATE: Below you’ll find a collection of screenshots taken throughout the video, showing you how many times Android-packing smartphones are shown and how few times (no times, in fact), a non-Android smartphone is shown. There’s one instance in the video where a point-and-shoot camera appears, but on the whole, each device appears quite clearly. It’s no coincidence that this new Nexus was shown front and center – essentially the largest smartphone to appear in the whole video, in fact.

Also appearing – a bunch of different frames captured of the Nexus device in question. Just for those of you wishing to take every pixel available into account. These are for the most hardcore early adopters amongst you. You’ll also be able to find the video on YouTube in a couple of iterations now hosted with different titles – we’ll let you do the hunting (the videos will be taken down quickly once they’re discovered).