This afternoon Motorola revealed the new Motorola RAZR 5G, a second-generation foldable display smartphone. This device is very similar to its immediate predecessor, with a few feature upgrades to make the case for a new model, including 5G connectivity. Motorola’s decided to continue on with their strategy of recalling the hype of the original RAZR flip phone with some marketing materials that effectively say that July of 2004 was a very, very long time ago.

Above is one photo / graphic mark setup from Motorola for the RAZR 5G. Below you’ll see another. The imagery below shows a woman with the RAZR posing for a look book. This lifestyle imagery is expected of any new smartphone – in this case, the imagery is slightly muddy and/or desaturated, probably in order to suggest a yesteryear vibe.

On the right, above, you’ll see another bit of marketing material for the Motorola RAZR 5G. This image shows several colors of the phone set up for a product shoot. This image seems to have been treated the same as the look book photos of the woman.

Below you’ll see two marketing images from Motorola. The one on the left was released in the year 2007. The one on the right is part of this new 2020 vision for the RAZR line. 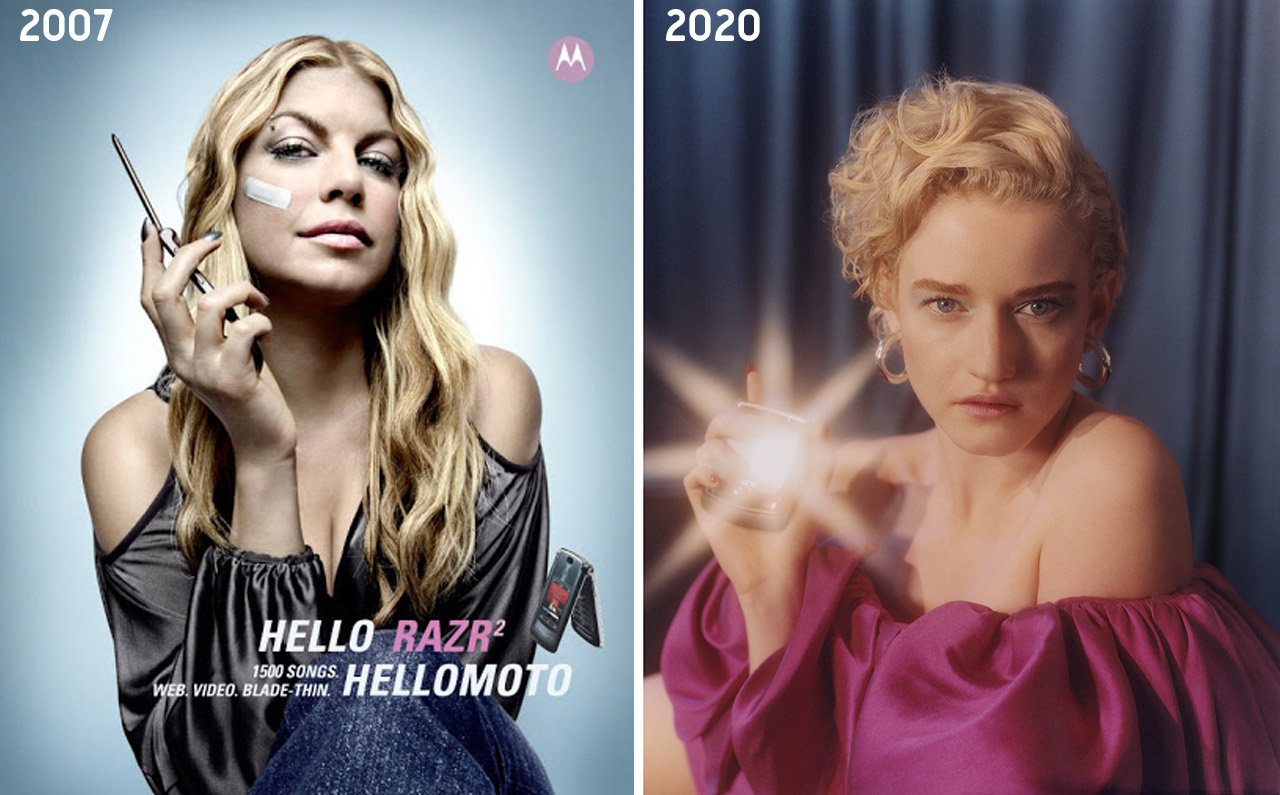 The Motorola RAZR 5G (2020) HAS A 6.2-inch foldable pOLED display inside with 2142 x 876 pixels across its face. This device has a 2800 mAh battery, Qualcomm Snapdragon 765G processor, 8GB RAM, USB-C, and no headphone jack. You WILL however get a USB-C to headset jack adapter cable in the box.

This version of the RAZR weighs in at 6.77 ounces. It has a thickness of 0.31 inches, a width of 2.86 inches, and an unfolded height of 6.66 inches. This new version of the RAZR will be released “universally unlocked” at a variety of stores. You’ll find this new RAZR released at Best Buy, B&H Photo, and online with Amazon and Motorola for approximately $1400 USD. The release date is “this fall” according to Motorola.

There’ll also be an AT&T version in the future and a T-Mobile version. T-Mobile USA shared that they’d have the device available in Polished Graphite and Blush Gold, and shared no other details as yet.

UPDATE: As per usual, T-Mobile will allow users to “pay in full today” for the device once it’s released to the carrier for approximately $1399.99 plus tax (and qualifying services required).