Canonical comic series Darth Vader (Pak, Ienco, Menon) released issue 10 this month with a giant revelation. It would appear that Darth Vader was shown his own future in the span of time between The Empire Strikes Back and Return of the Jedi. This should come as little surprise for those that believe Jedi can actually see the distant future in the Star Wars universe – but for Vader, this has some dire implications.

In Darth Vader 10, “Into the fire: The Red Horror”, Vader faces a beast the likes of which do not exist anywhere else in the known universe. In what they call “Red Space”, Vader flies with Ochi of Bestoon to meet his destiny. He seeks out answers about what The Emperor plans on the planet Exogol.

It is there that they come face to face with “a subspecies of the Summa-Verminoth,” also called here “the galaxy’s greatest predator.” As The Emperor’s administrator Sly Moore suggests in this comic, “This specimen evolved to hunt its own kind, so its attacks transcend the merely physical.”

“If it fails to crush your body,” said Moore, “it will surely break your mind.” 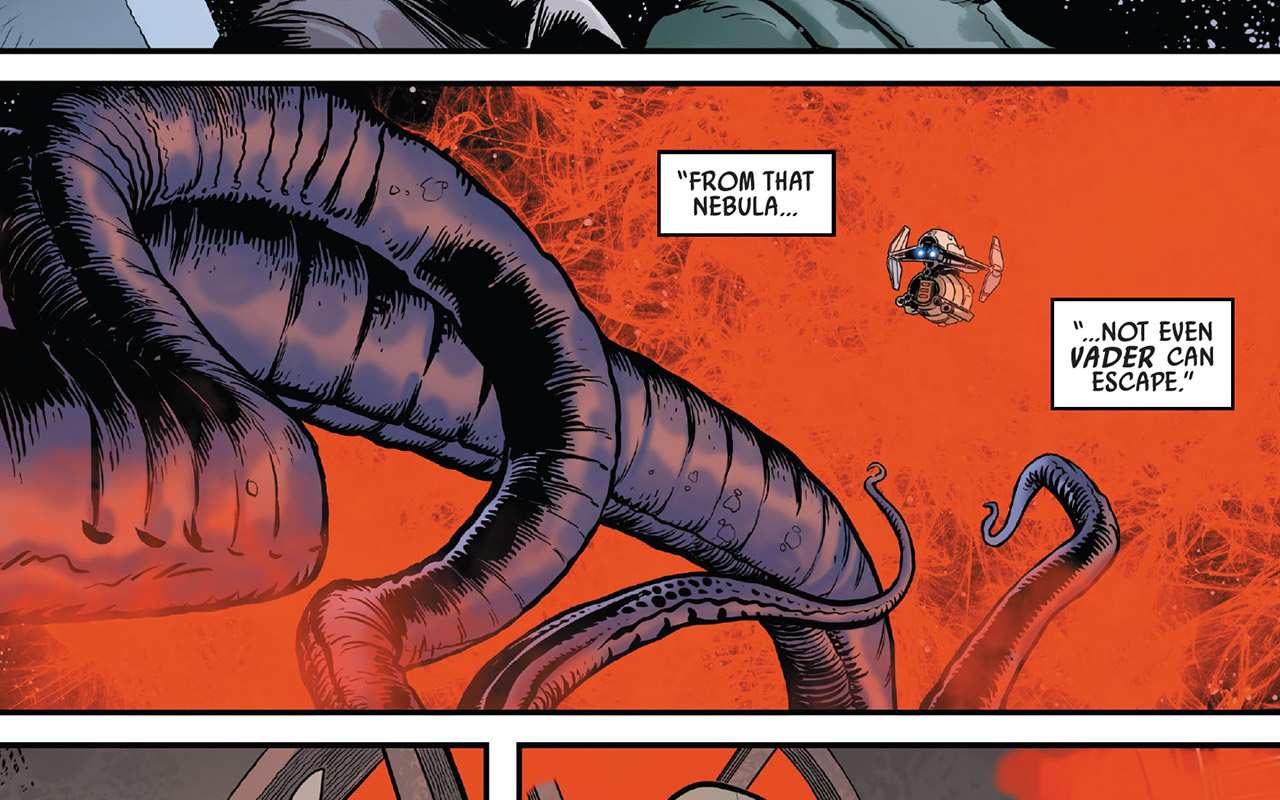 Vader and Ochi escape the beast’s physical embrace, then find themselves swallowed by a red mist. As beautifully illustrated by the framing of each element in the pages of this section of the comic, Vader is thrown into a nightmare of the creature’s making.

The beast drags Vader through his memories of:
• His final battle with Obi-wan
• His first face-to-face meeting with Luke
• Obi-wan’s final plea*
• His lightsaber fight with Luke
• The removal of Luke’s hand
• The removal of his own arm and legs
• A blending of worlds…**

*Re: “It’s over Anakin! I have the high ground!” and “You underestimate my power.” One of the most meme-friendly moments in the whole Star Wars prequel universe.

**It is at this point that the beast bends Vader’s mind to insert Luke into his memory of his final battle with Obi-Wan as Anakin. “I loved you,” says Luke, instead of Obi-Wan. Luke then appears in place of Vader, saying “There is no escape,” standing over Vader on the bridge inside Cloud City. 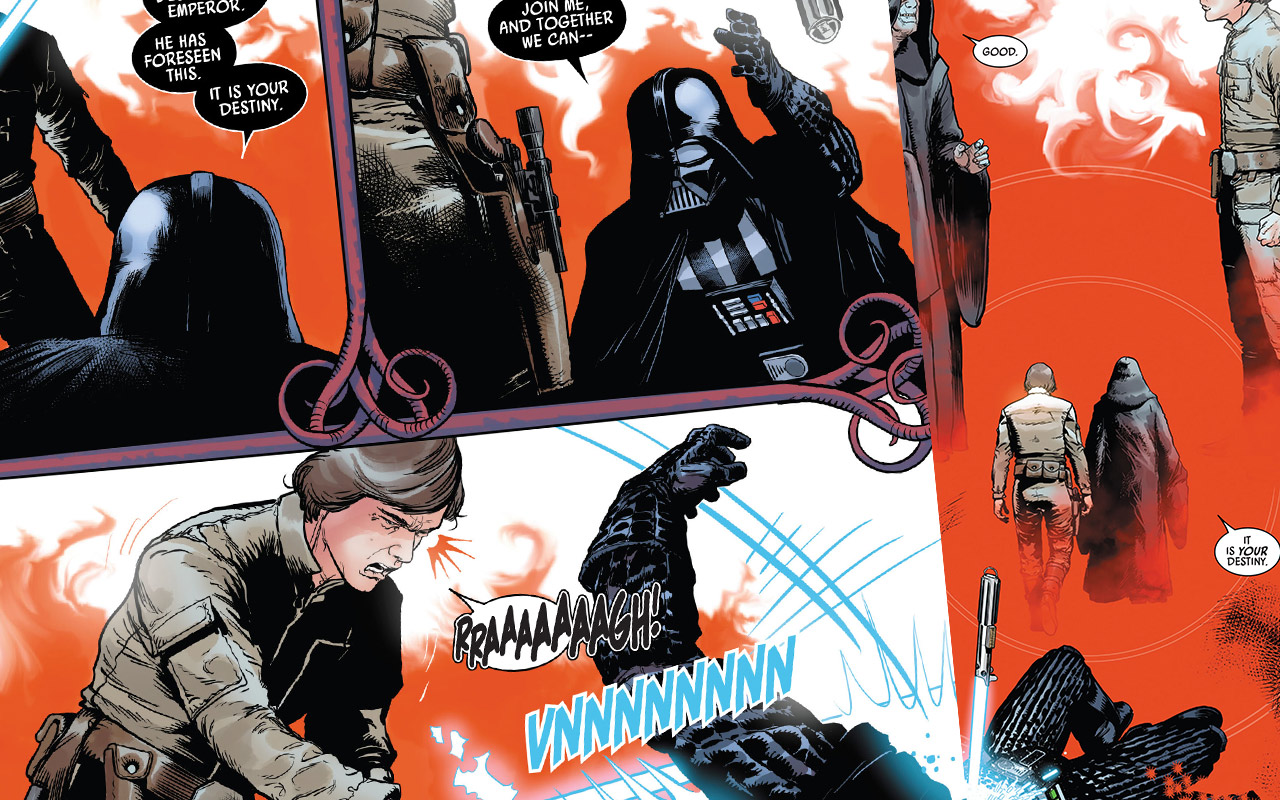 In Return of the Jedi, Luke chops off Vader’s hand and immediately sees the irony of the situation. It’s ironic that he’s removed the same hand that Vader removed from him in their most recent battle.

Now, in this comic, Vader is forced to see the connection between Obi-wan removing Anakin’s limbs despite his remaining love for his opponent, and his chopping of Luke’s hand. Even further, though, Vader is forced to essentially foresee a future that may come to pass.

Vader is shown a future in which Luke removes Vader’s hand (as we eventually see in Return of the Jedi), then goes the extra step and murders Vader outright. He’s shown what he imagines might’ve happened if he told Luke of his parentage in a position of weakness, instead of telling him while he had the upper hand (no pun intended.)

In that, the mix of the battle on Cloud City and the battle they’d have in the near future, Vader sees what he imagines is Luke’s destiny, should he fail.

Because of this forced vision, we can imagine that Vader’s actions after he’s de-handed by Luke aren’t only anger at The Emperor, but fear that Luke would turn to the Dark Side. Once it’s clear in their final battle that Luke absolutely will NOT turn to the Dark Side, we can now imagine that it’s not only love for his son that Vader feels when he kills The Emperor, but pride that Luke refused to be turned!

Vader does not fail. Vader enters a new realm of power and opens a book into a dimension of the character we’ve not yet experienced. I’m not going to show you the entirety of the last page of the comic here – you’ve really got to see the thing for yourself. 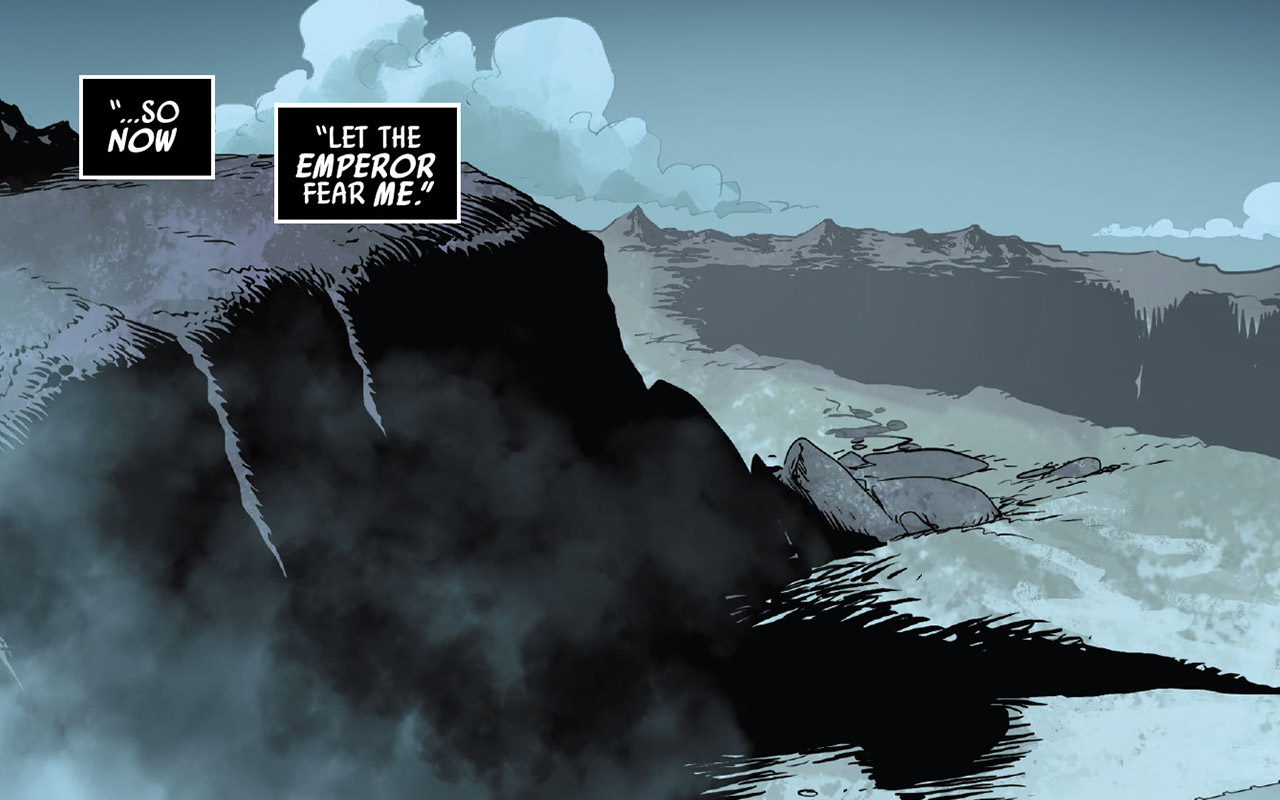 This is only the latest in a line of comics from Marvel Comics that’ve delivered greater depth to the Star Wars universe, and in this case specifically to that of the always-interesting Anakin Skywalker and Darth Vader.

The comic Star Wars: Darth Vader (by Pak, Ienco, and Menon) can be found on comic book store shelves and on digital bookstore shelves right this minute.