Apple’s new Apple TV looks no different from the outside, but when you hook up your TV it’s another matter: Full HD video support, along with a new, streamlined UI that pulls the STB further in line with its iOS siblings. The compact box plays particularly nicely with the new iPad, and while 1080p isn’t enough to handle the Retina Display on the new tablet, the video shifting technology makes them a great pairing.

Beyond Full HD, the big change for the new Apple TV is the iTunes in the Cloud support, allowing you to access movies and TV shows you’ve bought on other devices. They’re streamed in 1080p, though if your home connection or wireless network isn’t up to the task you can set the box to a 720p cap. Connectivity includes HDMI and WiFi a/b/g/n, along with 10/100 ethernet, an optical audio output and a microUSB port for firmware flashing.

Interestingly, inside is another new processor, a single-core variant of the Apple A5 that replaces the previous-gen’s single-core A4 chip. That likely means 1080p isn’t coming to the older model. It’s also worth noting that if you want to mirror the new iPad’s display on your Apple TV, you’re limited to 720p; 1080p is only supported on AirPlay streaming. Navigating menus is slick and pain-free, though streaming performance will obviously depend on your broadband connection.

Unfortunately there’s still no third-party app support, though the refreshed UI does make accessing third-party services like Netflix more straightforward. Still, as a companion to the new iPad it’s an interesting proposition: it’ll drop alongside the new tablet on March 16, priced at $99. 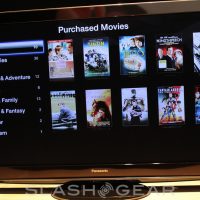