Another new Apple product has been released, and that means the repair specialists iFixit have conducted another one of their detailed teardowns. This week it’s the new 21.5-inch Retina iMac that was just announced, complete with 4K display. As usual, iFixit spares nothing when it comes to revealing the particulars, but unfortunately due to non-upgradeable parts, the new iMac was given only a 1 out of 10 on their “repairability score.”

First up, iFixit found the 4K Retina display on the new 21.5-inch iMac was manufactured by Apple’s long-time partner LG Display. This is the same as the 27-inch iMac’s 5K Retina display from last year.

But while much of the insides of the new iMac look the same as the previous model, there are a few differences. These include the WiFi antennas being attached to the AirPort card, along with the hybrid Fusion Drive being made with a much smaller flash partition than before. 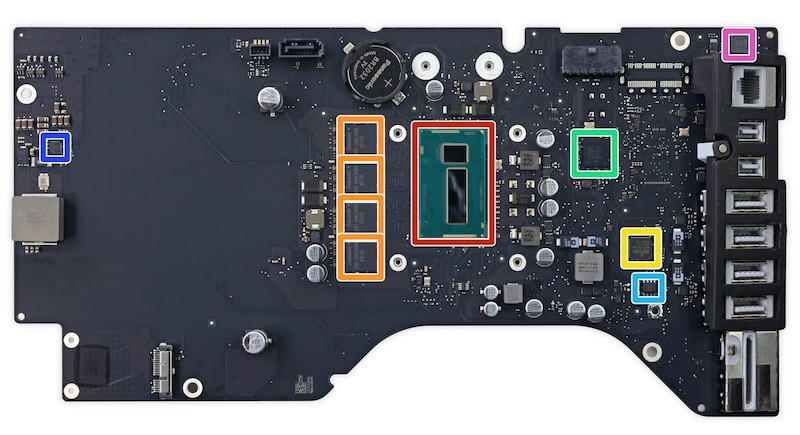 As for the bad news, iFixit found that the RAM, made by Samsung, is soldered to the logic board, making it non-upgradeable, thus users are stuck with the amount they ordered when the computer was first purchased. This isn’t different from the previous 21.5-inch iMac, but interestingly the latest 27-inch iMac does allow its RAM to be upgraded.

This was the main reason the new iMac was given such a low repairability score, along with the fact that the CPU is also soldered to the logic board, and that the display LCD is directly fused to the computer’s glass panel.