Netgear revealed its ambitious network storage plans early this year, rolling out the red carpet for an eventual launch of a handful of ReadyNAS units that would complement the ReadyNAS Duo v2 that we reviewed in 2011. We got our hands on one of these new units, the ReadyNAS RN102, a 2-bay connected device that offers up to 8TB of storage, which places it a step below the similarly-launched RN104. At about the same price of the Duo v2, the RN102 takes things up a notch in the hardware department, but is it ultimately worth the upgrade? Read our full SlashGear review to find out.

The ReadyNAS RN102 runs on a Marvell Armada 370 1.2GHz processor alongside 512MB of RAM, which is the same hardware configurations as the RN104 and the RN10211D. The storage can go up to 8TB, which is half the maximum capacity of the RN104. The drives (SATA/SSD 2.5” or 3.5”) are hotswappable and the installation is tool-less, making adding and removing drives as simple as pressing a release button. 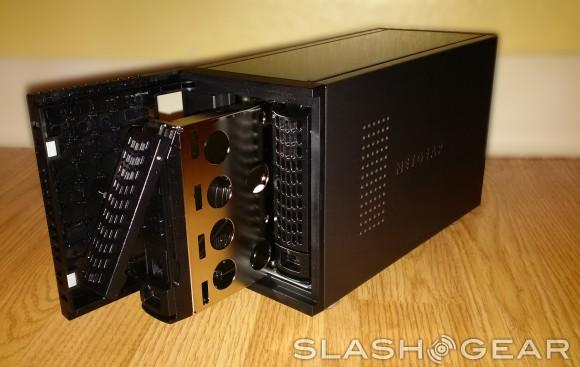 Overall and particularly on the rear of the device, there’s one USB 2.0 port and two USB 3.0 ports, as well as an eSATA expansion slot and a Gigabit LAN port. These are positioned below a 92mm fan, while the rest of the controls are positioned on the front of the drive beneath the power button (blue LED). During operation, the NAS pulls 31 watts, which drops to a single watt with wake on LAN. 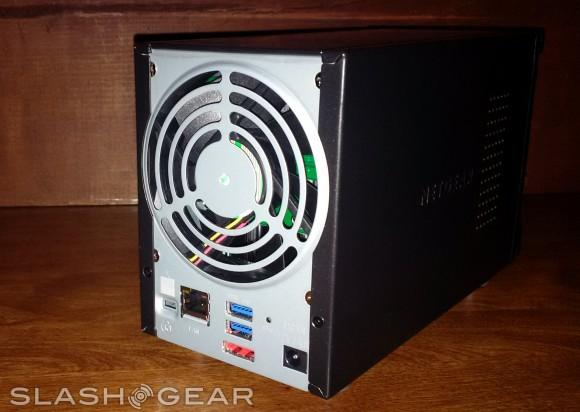 The device itself isn’t terribly large, weighing in at a touch over 2 pounds and measuring 220 x 101 x 142mm — the simple design and small size means it can be stowed away out of sight or easily added into a larger system of devices. When in operation, the fan can be heard if you’re in close proximity to the NAS, but overall it is surprisingly silent for a unit of its size and likely won’t be noticed unless placed in a silent room.

As far as network storage device’s go, the RN102’s interface is surprisingly open and clean, which is a welcomed change from some of the convoluted, hard to navigate control panels some NAS units ship with. The software is robust enough to work for anyone who needs network storage — businesses included in this statement — but is simple enough that personal use won’t prove too complicated for the average owner to utilize. 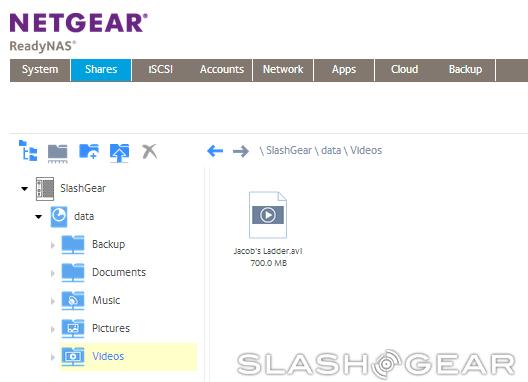 Transferring items from a desktop or laptop is simple through the browser interface, requiring only the destination folder to be selected and the “Upload” button to be clicked. Transferring content from mobile devices is similarly possible and easy using the ReadyNAS Remote, for which it can be downloaded to a desktop client in addition to an iOS or Android device, giving you a personal “cloud”. The NAS has an app store that is accessible through the online interface, which allows for different add-ons to be installed. ReadyNAS Photos II, for example, is available for photographers or those with ample photos to provide a private storage base with the ability to open it to select other individuals. 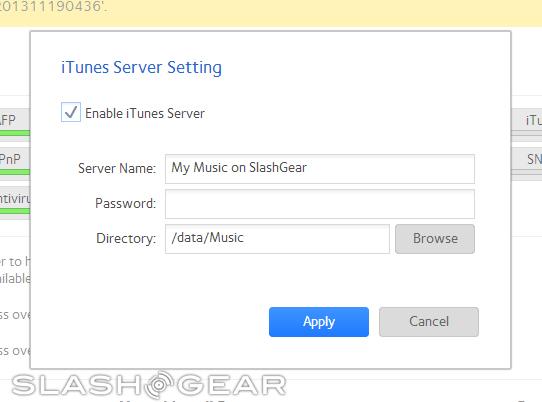 There are other media options, as well, including the ability to tie the NAS into iTunes Music, which you can see above. There’s ReadyCLOUD, synchronization with Dropbox, DNLA, access to the Genie+ Marketplace, and more. Overall, the software is both robust and easy to navigate, providing options and monitoring solutions that will cover needs across a wide spectrum of users.

The latest ReadyNAS from Netgear is a likable device, even if connected storage devices aren’t the most exciting product on the market. The price tag holds steady at the low-end $200 range (depending on where you buy it, sans drives), opening it up to a larger market than those priced in the higher ranges, which makes them more SMB-centric. Though there are a couple differences over the higher-priced options (namely the lack of an LCD), overall it is a very solid device, and one that feels like it costs more than it does. 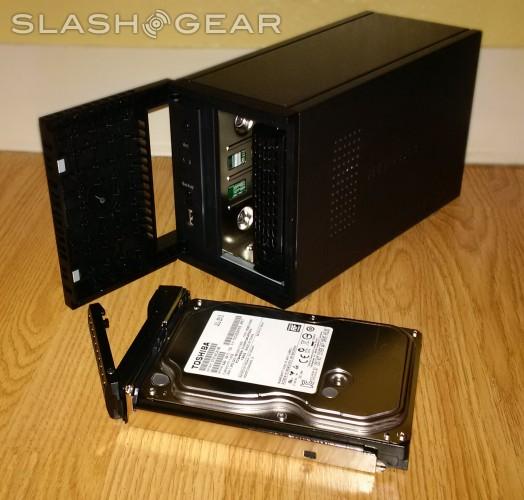 The Iomega px2-300d NAS we reviewed last year, for example, is about double the price of the RN102, and when comparing the two side-by-side, the Netgear offering holds its own without issue. You’re not losing out on build quality for the lower-price tag, and you have the same access to media apps and different software options to use the ReadyNAS for various functions.

Overall, if you need a NAS unit that fits a modest budget but doesn’t require you to sacrifice much more than a small LCD display, the Netgear ReadyNAS RN102 is a solid option.