Netgear has updated its prosumer NAS range to take on cloud backup upstarts, adding a Dropbox-esque ReadyDROP cross-device sync option, and the ability to back up using Time Machine remotely. The new firmware for the ReadyNAS DUO v2 and ReadyNAS NV+ v2, version 5.3.6, expands the ReadyNAS Remote feature already on the standalone network-attached storage, creating monitored folders on each of your devices which, just as with Dropbox, are automatically synchronized whenever you add or change files.

Designate a folder for ReadyDROP, Netgear’s senior marketing manager of storage products Matthew Pahnke explained to us, and the NAS will replicate that folder across each linked device. Any files added are automatically saved to the NAS itself, and pushed out to each device so that an up-to-date copy is available no matter which you’re using.

ReadyDROP uses impromptu VPN connections – complete with encryption – to do that, and since the capacity of the synchronized folder is limited only by the capacity of your NAS itself, it’s potentially a lot cheaper than cloud-hosted storage services like Dropbox or Google Drive. There’s also access from Netgear’s iOS and Android apps.

As for remote Time Machine support, Macs will be able to designate a ReadyNAS drive as the target for Apple’s native backup app, but that drive will be accessible both locally – when on the same network – and remotely, across the internet. The system requires no extra software, Pahnke explained, and will automatically choose between a direct connection across the local network (when available) or a secure VPN connection back to the ReadyNAS (when you’re on the move). 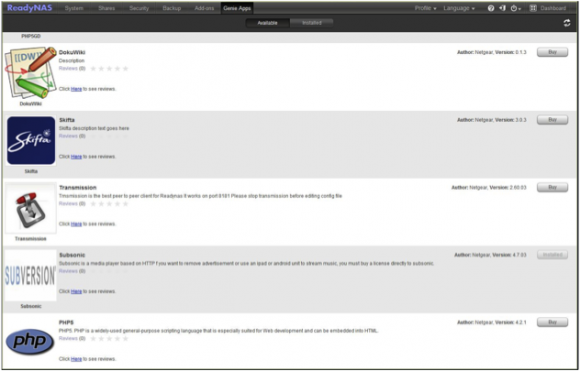 Firmware v5.3.6 also works with updates to the Mobile ReadyDLNA apps for iOS and Android, streaming media directly to smartphones and tablets, and polishes the third-party app and add-on support for the NAS themselves. There’s now a new Genie Apps section for one-click installation, and Netgear expects various developers to jump onboard now that there’s support for paid and subscription-based options.

Those apps could include integration with third-party cloud services such as Amazon’s or Google’s (though Netgear already offers its own ReadyNAS Vault service) for those wanting an actual cloud backup too. One the first, Pahnke revealed, would be crowdsourced backup sharing service Symform, which allows users to share space on their local NAS in return for access to capacity on the remote drives of others.

If you have another ReadyNAS unit elsewhere, however, you’ll also be able to use the freshly integrated ReadyNAS Replicate feature. Previously a pro add-on, the system allows one or more NAS units to copy their data between the group, ensuring offsite backups.

Firmware v5.3.6 will be available for the ReadyNAS DUO v2 and ReadyNAS NV+ v2 from today. No word on when – or if – other models might see ReadyDROP and the other functionality added, though we would be very surprised if it wasn’t on Netgear’s roadmap.