NEC isn’t much known for its Android devices outside of Japan, but having played with the Media Tab UL N-08D at CEATEC we now think that’s something of a shame: it’s one of the best tablets we’ve seen so far. Running Android 4.0 Ice Cream Sandwich on a 7-inch, 1,280 x 800 LCD display, and clad in a 7.9mm thick, 249g chassis made of metal, plastic, and carbon fiber, it’s fast and feels high-quality in the hand.

Inside, there’s a 1.5GHz dualcore Qualcomm Snapdragon S4 MSM8960 processor paired with 1GB of RAM, 16GB of storage, and a microSDHC card slot to add to that. Connectivity includes LTE, WiFi b/g/n, Bluetooth 4.0, and microUSB, and there’s GPS and two cameras.

Up front is a 2-megapixel shooter for video calls and vanity shots, while there’s an 8-megapixel camera on the back with autofocus, an LED flash, and 1080p 30fps video recording. The main camera uses Sony’s Exmor R for Mobile technology, with a backside-illuminated CMOS. 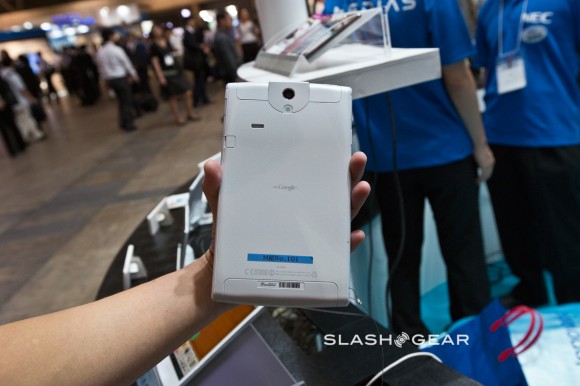 It’s how NEC has managed to package together the various components into something so thin and light which really impressed us, though. The Japanese market gets a TV tuner, and there’s a special haptics system with five levels of response to suit different alerts. A 3,100 mAh battery drives the 7-incher for up to 690 minutes of 3G talktime or 900 hours of LTE standby, and the display – although not quite of the resolution of B&N’s NOOK HD – has great viewing angles and impressive brightness levels.

In short, it’s Apple-levels of polish but resolutely running Android for those who can’t be swayed to iOS, something we’ve been hoping for from Android OEMs for some time now. Unfortunately, NEC shows no sign of offering it outside of Japan, where it’s been available on NTT DoCoMo for a couple of weeks now.