The Mars helicopter has successfully completed its second flight, with Ingenuity cranking up the challenge as NASA expands its historic testing. This latest launch, which took place early in the morning on April 22, almost doubled the flight time compared to Monday’s first attempt, with the Jet Propulsion Laboratory team taking advantage of that to throw in some extra maneuvers.

On Monday, the JPL group in charge of Ingenuity – and the broader Perseverance rover project – played it relatively safe. The helicopter took off, hovered at around 10 feet off the Martian surface, and then returned to the ground, the whole thing taking about 30 seconds in all. While the flight may have been short, it was nonetheless a huge achievement: our first example of controlled, powered flight on another world.

This second test, however, ran for 51.9 seconds in total. Ingenuity took off at 5:33am EDT this morning – or 12:33pm local time on Mars, if that’s what you have your watch set to – and climbed to 16 feet this time around. It hovered briefly, but then undertook a 5-degree tilt. That allowed the rotors to move the helicopter sideways for 7 feet. 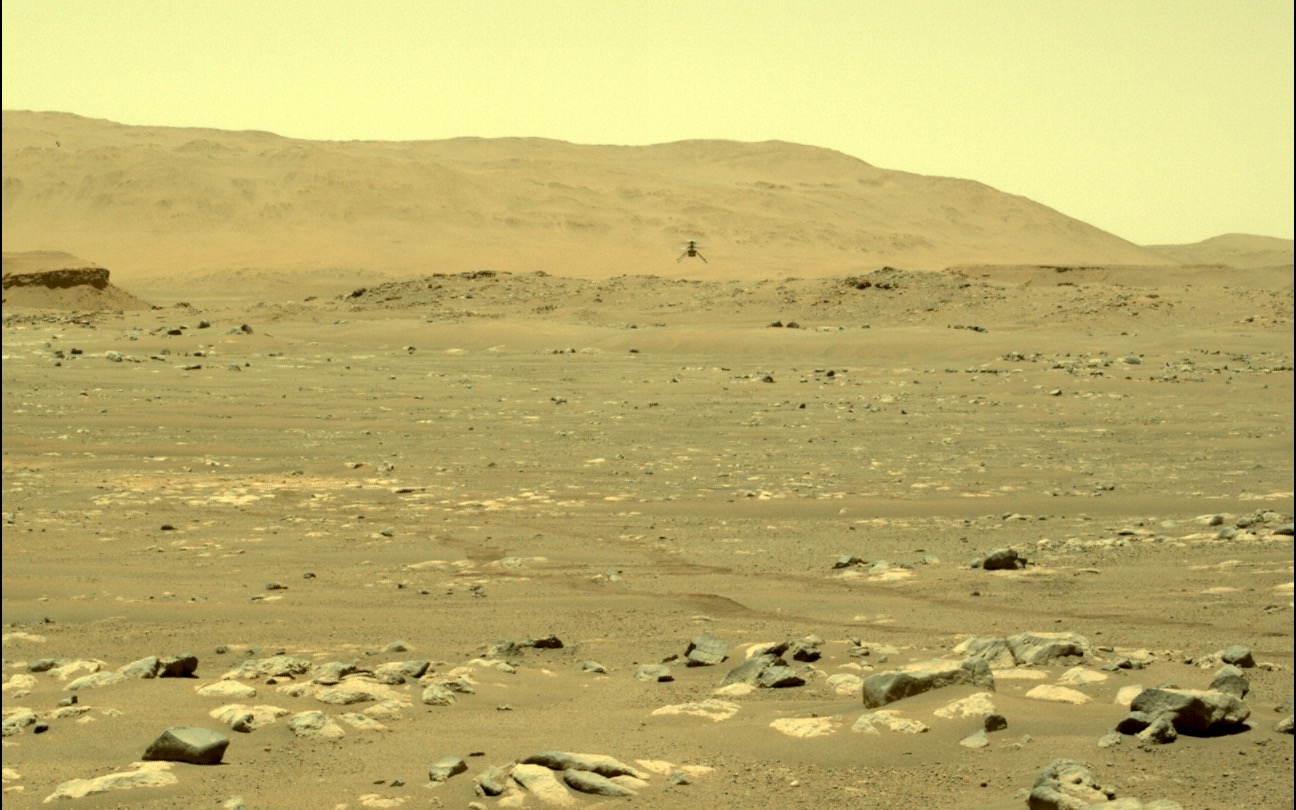 Again, as aerial acrobatics go, it’s fairly low-key stuff. Nonetheless, considering the variables involved in the Martian atmosphere – not least the fact that pressure there is so slight in comparison to Earth, making flying tricky for the dual-rotor Ingenuity – it’s another big step forward in understand the potential, and the potential limits, for future flying missions on the red planet.

“The helicopter came to a stop, hovered in place, and made turns to point its camera in different directions,” Håvard Grip, Ingenuity’s chief pilot at JPL, said of today’s test. “Then it headed back to the center of the airfield to land. It sounds simple, but there are many unknowns regarding how to fly a helicopter on Mars. That’s why we’re here – to make these unknowns known.”

While Grip may be Ingenuity’s chief pilot, as with Monday’s flight the helicopter was responsible for its own operations today. The distance between Earth and Mars, plus the fact that Ingenuity’s signals must be routed via Perseverance then then back to NASA, means the latencies involved are simply too great for direct control. Instead, the flight control system is programmed and then undertakes the various actions on its own.

To get that programming right, NASA and the JPL team uses simulators and modeling back on Earth. Perseverance, meanwhile, observes the tests from a distance – this time around 211 feet away – using its onboard cameras to record Ingenuity’s flight. That way, not only does the team back on Earth have a record of what happened, but the rover itself is out of harm’s way should the helicopter unexpectedly crash. We’ve also seen how NASA can enhance that video, helping solve questions like why there wasn’t more visible dust blown up during Ingenuity’s first take-off and subsequent landing.

The full recording from Perseverance – plus the data collected by Ingenuity itself – is still working its way back in data dumps from Mars. Unlike the first flight, though, where the Mastcam-Z camera on the rover was zoomed in as close as possible to the helicopter, this time around the magnification was dialed back a little. It should mean a more expansive view of the second flight.

Next up will be further flight tests, with NASA looking to push the envelope a little more. Although Perseverance is intended to operate on Mars for years, Ingenuity’s scheduled mission is far briefer: 30 sols, or a little less than 31 Earth days. While the helicopter isn’t carrying any scientific experiments itself, that’s because Ingenuity is the experiment, with future missions to Mars – or other planets – potentially using airborne explorers to gain access to regions where land-based rovers couldn’t reach.