Decades-old images from the Apollo missions have cast new light – or, more accurately, new shadow – on NASA’s hunt for water on the Moon, potentially paving the way to Artemis astronauts being more self-sufficient in a future lunar base. Although the Moon is usually thought of as dry and desolate, patches of water ice are believed to be present at the poles. New research, however, indicates that ice may be even more widespread.

The ice at the poles benefits from constant shading: it’s found in craters which never feel the heat of the Sun. Part of the Artemis project’s goals is to figure out a way to make use of that water for a more sustainable lunar base, as astronauts return to the Moon.

However, more recently, evidence of water ice across the surface more broadly have been observed. That includes in the dayside surface of the Moon, where you’d expect the solar warmth to evaporate it. “These observations were, at first, counterintuitive: Water shouldn’t survive in that harsh environment,” Björn Davidsson, a scientist at NASA’s Jet Propulsion Laboratory in Southern California, explains. “This challenges our understanding of the lunar surface and raises intriguing questions about how volatiles, like water ice, can survive on airless bodies.” 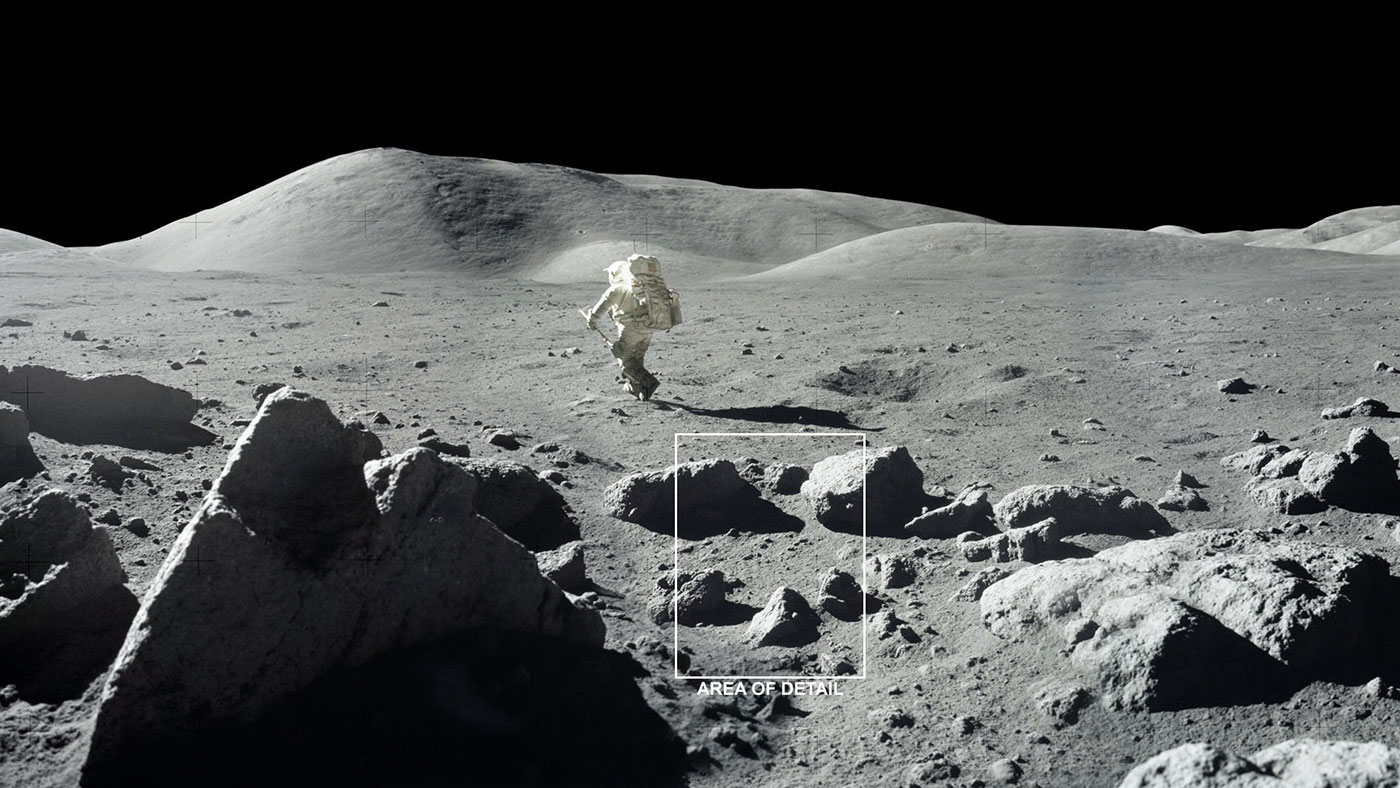 Davidsson and co-author and fellow JPL scientist Sona Hosseini have published a new paper today, potentially explaining just how that ice might be lingering. The surface of the Moon, they point out, isn’t regular and flat. Instead, its rocky texture – combined with the very thin lunar atmosphere – could be creating pockets where ice is sustainable.

By factoring in images from the Apollo missions between 1969 and 1972, when NASA sent crews to the Moon, the two scientists could include the boulders and craters in the computer model of ice formation and melting. The result, NASA explains, is a network of previously-overlooked shaded areas. “By factoring this surface roughness into their computer models,” the space agency says, “Davidsson and Hosseini explain how it’s possible for frost to form in the small shadows and why the distribution of water changes throughout the day.”

The warmed areas can reach temperatures of 240 Fahrenheit, or 120 Celsius. However because the atmosphere is so thin, heat tends not to distribute even to nearby areas of extreme coldness. In the shade, therefore, temperatures can plummet to as low as -350 degrees Fahrenheit, or -210 degrees Celsius. 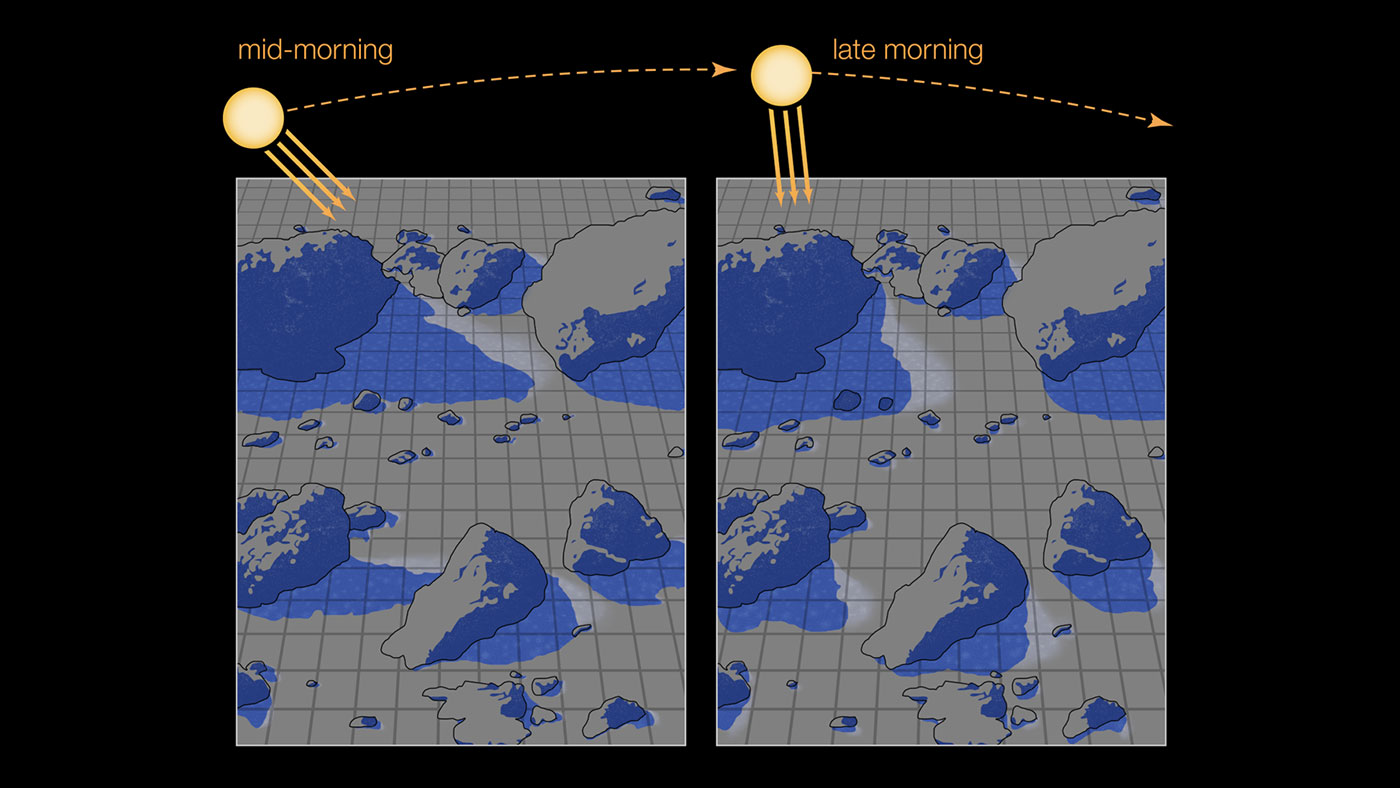 “As the Sun tracks through the lunar day, the surface frost that may accumulate in these cold, shaded areas is slowly exposed to sunlight and cycled into the Moon’s exosphere,” NASA explains. “The water molecules then refreeze onto the surface, reaccumulating as frost in other cold, shaded locations.”

The new study – “Implications of surface roughness in models of water desorption on the Moon,” published today in the Monthly Notices of the Royal Astronomical Society – builds on previous research which attempted to integrate surface roughness data. However it also factors in how water molecules could remain on the lunar surface as frost, a new consideration. The implications are more than just theoretical, too.

“If water is available in the form of frost in sunlit regions of the Moon, future explorers may use it as a resource for fuel and drinking water,” Hosseini says.

Next up will come further research into just how much water ice there might be, how accessible it is, and how it might move around the Moon’s surface over time. New sensors, dubbed the Heterodyne OH Lunar Miniaturized Spectrometer (HOLMS), are being developed to hitchhike to our natural satellite on future missions, and measure hydroxyl levels. That can be an indicator of water presence.

Beyond that, however, the new findings might have a broader impact on space exploration further afield. After all, the Moon isn’t alone in having plenty of surface texture, and it’s possible that similar nooks and crannies on Mars – or even the particles in Saturn’s rings – might also be hiding water ice that could be useful in future missions.