As much as some of us (ahem) were hoping the Mars mystery rock turned out to be a long-lost baseball from yet unknown aliens, the cause behind the rock’s sudden appearance has been solved with a far less exciting explanation: Opportunity’s wheel, as first speculated, kicked the rock up while moving. No alien mushroom to be seen.

The mystery started in the middle of last month, when images taken by the Opportunity rover on Mars several days apart showed the sudden appearance of a rock, exciting researchers and igniting conspiracy theorists across the Internet. Being called the jelly doughnut rock and officially dubbed Pinnacle Island, the rock was eventually found to have a unique chemical composition, causing further excitement.

Several possible explanations were given about how it could have surfaced, one of which involved one of the Opportunity’s front wheels having kicked up the rock while moving, explaining its appearance in the later set of pictures. Of course, armchair researchers surfaced contesting this, the most amusing of which involving a lawsuit claiming, in part, that the rock was really a mushroom grown in the time between the first and last picture.

Alas, as tends to be the case in these matters, it was that original and simple explanation — the rover’s wheel overturning the rock — that ended up proving true. NASA has released an image proving this, showing tracks discovered upon finding another rock that was broken. Said NASA Mars Exploration Rover lead scientist Steve Squyres: 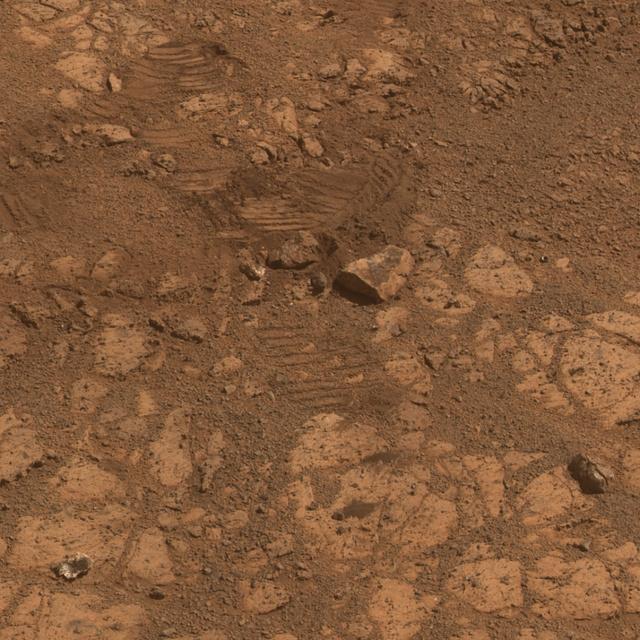 Researchers have determined the now-infamous Martian rock resembling a jelly doughnut, dubbed Pinnacle Island, is a piece of a larger rock broken and moved by the wheel of NASA’s Mars Exploration Rover Opportunity in early January. Only about 1.5 inches wide (4 centimeters), the white-rimmed, red-centered rock caused a stir last month when it appeared in an image the rover took Jan. 8 at a location where it was not present four days earlier.