NASA snaps photo of a violent icy avalanche on Mars

Mars is home to a dusty landscape painted with orange and brown hues, pocked with craters, and adorned with a variety of hills and mountains. Depending on where you look, Mars is also home to numerous sheer cliffs that look like long striations when captured from a distance and like near-vertical rock walls when snapped by the Martian rover. One of the latest images of these cliffs includes a clearly visible avalanche.

Unlike the bright white snowy avalanches we’re familiar with on Earth, the avalanche captured on Mars is dark brown, mirroring the Red Planet’s dusty landscape. The image was snapped by NASA’s Mars Reconnaissance Orbiter (MRO) spacecraft’s HiRISE camera on May 29, though it was only recently published by the space agency. 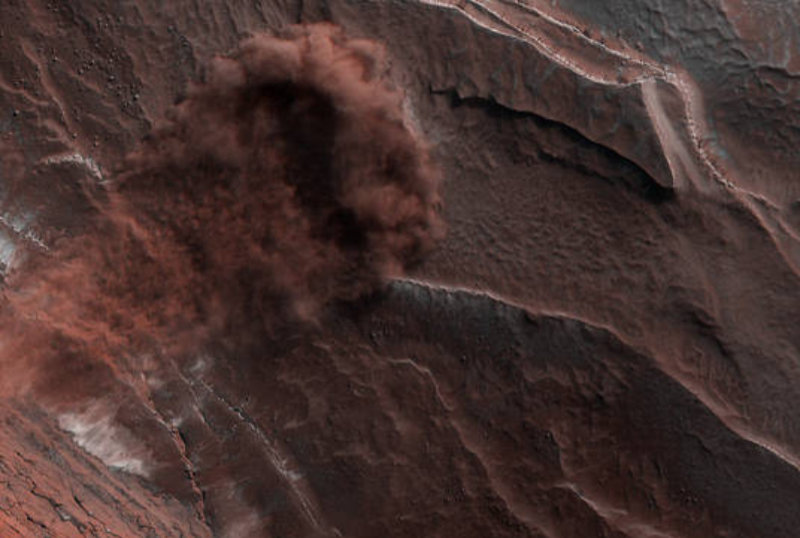 The dusty explosion shown in the image above is the result of ice and rocks tumbling down a cliff more than 1,600ft high, according to NASA. The space agency explains that every spring season on this part of Mars, a layered stack of rock is bathed in sunlight, which warms the ice enough to destabilize it, causing avalanches.

The large blocks of ice are described as kicking up dust, producing the large explosion revealed by the image. This isn’t the first time NASA has captured an avalanche on the Red Planet, though they’re not all as clear and dusty as the May event.

Back in October 2015, for example, NASA shared an image of an avalanche halfway down a large rocky cliff — and, unlike, the one above, that avalanche (below) is snowy white like the ones we’re familiar with on Earth.