NASA has released new photos of the surface of Mars as well as video of Curiosity‘s dramatic landing on the Martian surface, as the rover begins its long mission to explore for evidence of life. The video, pieced together from a photo sequence captured by the Hazcam cameras used for guidance and navigation, shows some of dusty descent from Curiosity’s point-of-view, while the new gallery of stills helps confirm where, exactly, on the topography of Mars the rover has arrived.

Photo quality is still not at the level it will eventually be when all of Curiosity’s instruments are deployed. The new images were taken by the Mars Hand Lens Imager (MAHLI) which is on the end of the rover’s robotic arm; they still have a transparent dust cover in the way, which has been kept in place to protect the camera from detritus blown around during the landing.

NASA says that the dust cover itself will not be opened until more than a week after the landing, though MAHLI isn’t the only camera ready to grab photos of Mars. Curiosity’s head, which is currently still stowed, has a camera array of its own which can grab full color stills and 720p HD video; the Hazcam cameras, meanwhile, will be relegated to capturing 3D views of the periphery of the rover, used for obstacle avoidance and to help guide the robotic arm.

A second photo, still in black and white, shows Mount Sharp ahead of the rover, along with the shadow of Curiosity itself. The rover is currently in Gale crater, with the mountain towering three miles above. 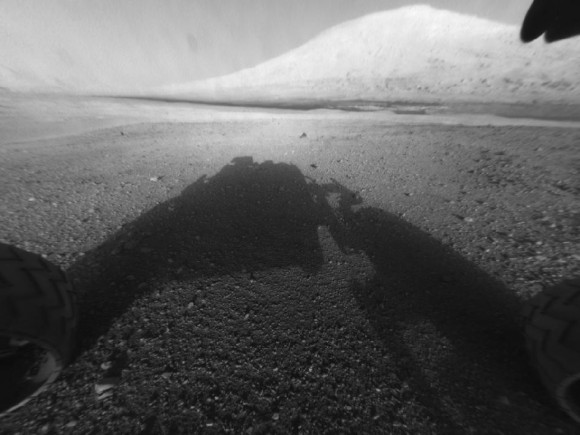 Meanwhile, back on Earth there’s an arguably tougher challenge ahead: convincing the US government that space exploration is still worth funding. “With the retirement of the Shuttle program after its final flight in July 2011, some have suggested that NASA’s leadership in the exploration of space, including our extraordinary successes on Mars, was coming to an end” NASA administrator Charles F. Bolden, Jr. wrote after Curiosity’s successful landing. “Nothing could be further from the truth.”

The rover is the next step in the path to sending a manned mission to Mars, something which President Obama has committed to do in the 2030’s. Before that, though, a second robotic mission could travel to join Curiosity before the decade is through. “Earlier this year, I directed NASA’s science mission director, along with the head of human exploration, Chief Technologist, and Chief Scientist to develop a more integrated strategy to ensure that the next steps for Mars exploration will support the nation’s planetary science objectives as well as our human exploration goals” Bolden said. “They are looking at many options, including another robotic mission to land on Mars in this decade.”